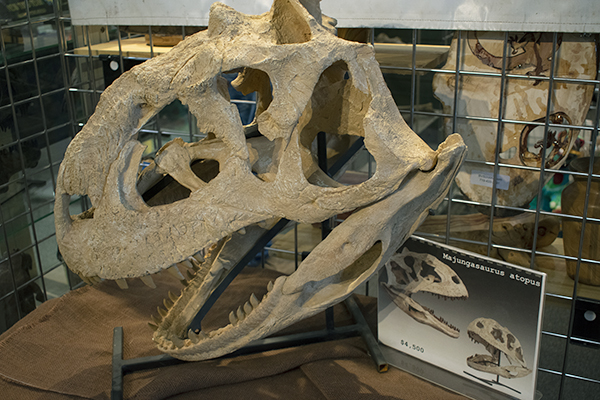 Crocodile’s ancestral dinosaur biting down on styrofoam — gotta keep those teeth sharp! Look at the Majungasaurus Atopus. What is that? You want one? Pony up your credit card.  Only US$4,500. Quite the bargain. Dinosaurs are gone — after all nothing lasts forever — but you can have one for your very own. It’s over there, right by the sabertoothed cat and the woolly mammoth. Real ones? Nah, cast replicas. There’s a real dinosaur over there. It’s just the one bone for quite a bit more cash. My! that thing is humongous. Wow! Look at the curl in the genuine tusk. The annual Tucson Gem, Mineral and Fossil Showcase has come to town.

The annual Tucson Gem, Mineral and Fossil Showcase is all over town from the end of January through the first couple weeks of February.  The show at the Civic Center was $13 and only ran a week.  I didn’t make it to that one but will try next year.  The show is annual but it’s the first time I’ve gone despite living in Tucson forever.  I didn’t realize there are more than 50 event sites all over the city and most of them are free. A few of them are open to wholesalers only but most are open to the public.

I went to the 22nd Street show — humongous tents filled with vendors hawking everything from fossils (yep, real fossils) to gems.  It’s free to walk in but $5 if you need to park your car.  If you’re buying petrified wood or a woolly mammoth, you’re going to need a pretty big car.

There were two areas where food trucks congregated.  May I say “yum”?  The Takoyaki Balls foodtruck of course featured takoyaki balls — they are octopus balls which you find in Japan at festival street vendors. Tomomi Katz, the truck owner, knows how to make them — they were perfect with the bonito flakes on top.  Just how I remembered them.  “Natsukashii!” It’s a great Japanese word meaning “brings back memories” or “gives one a sense of nostalgia”.  That’s exactly how I felt when I ate them.  I also ate some creamy Sri Lankan chicken curry cooked in spices and coconut milk later at another food truck, The Curry Pot when I came back for a short visit with Akari and Nobu.  It was served over rice with two side dishes.  One was a vegetable curry.  I have no clue what the other was but it was good. They had an iced coffee cooked with cardamom which was yummy. Akari got the same thing but Nobu wandered off to check out the barbecue truck.

At the 22nd Street venue, there’s a shuttle stop a short walk away.  The free shuttle will take you round to the various venues.

This year I left after visiting the two giant tents at 22nd Street because it started sprinkling.  I thought I better make it back to my bus stop and get home so my camera wouldn’t get wet.  So this year I only spent a couple hours at the 22nd Street site but next year plan to take in more venues and start much earlier. Plus I ran out of money, lol–there are a lot of goodies at very reasonable prices. I saw a lot so I’ll be sharing more photos in the next post.

Tip: The annual Tucson Gem, Mineral and Fossil Showcase runs for a couple weeks so you can visit the various sites on different days.  However, not all sites are open every day or even every week.  So make a plan. This year JOGS had a list of exhibits, locations and their days before the event.  Check them again next year if you’re planning to be in Tucson during the first couple weeks of February.

video of the 2020 Tucson Gem, Mineral and Fossil Showcase by Krieger.  This one was shot at the 22nd Street site where I was at.  He has several more videos up from various other sites as well.  The Showcase has over 50 sites spotted all over the city.

Ok, a bit wordy but putting it in for Wordless Wednesdays anyways

Wordless Wednesday – My Corner of the World – Photographing New Zealand

Wordless Wednesday – Musings of my Soul

Tucson.com did a good write up: How to gem show: A local’s guide to the 2020 Tucson gem showcase

To get an idea of all the locations, JOGS international exhibits still has their list of 2020 exhibit locations up.  Many sites are annual. The tucsongemshowapp is no longer showing anything since the event is over but when it was on, showed what was happening daily.  They have a downloadable mobile app as well.

And for the scientific minded folks out there :

a downloadable pdf article : A review of Dyrosaurus phosphaticus (Thomas, 1893) (Mesoeucrocodylia; Dyrosauridae) from the Lower Eocene of North Africa. by Stéphane Jouve

You can use the Amazon search bar to search for anything as I did with  “majungasaurus”. Results may vary.  Today one of the results that popped up was the BBC series Planet Dinosaur Season 1

, the Last Killer’s episode featuring the “last generation of killer dinosaurs” although the Feathered Dragon episode looks more interesting with it’s microraptor. Plus, you know, dragons!