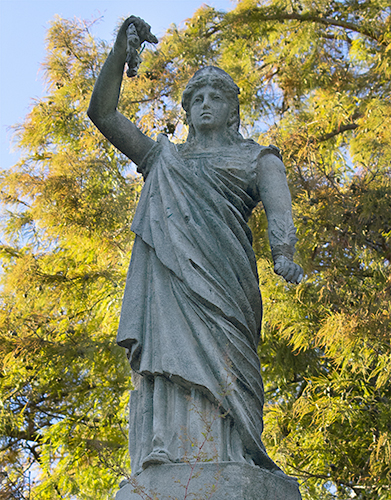 Staring at my phone, following directions to a geocaching treasure. This way. No, that! Takes me to a giant lady parked on an esplanade, a mini park between neighborhood houses. Who is she?

I love geocaching. Geocaching is an international phenomenon where people put out logbooks for you to initial when you find it.  It’s a great way when visiting some place new to find little known treasures like the Goddess of History from the 1884 World Fair.  There is even one on the space shuttle.

Some geocachers put a fair amount of thought into finding a special location and will research the significance of a local site.  My friend Tammy does some cool geocaching ‘tours’ of vintage neons including their history. When I found this New Orleans geocache, I read with pleasure Bamboozle‘s description:

“…The statue is a relic from the Worlds Fair-World Industrial and Cotton Exposition in 1884-1885 that was held in Audobon Park which at the time was owned by Charles Gayarre, Louisianas foremost historian. The Goddess of History was displayed in his honor and after the fair was moved to its current location which was then named Gayarre Place. With no inscription it has been always been referred to by locals as the Mystery Monument ( I for one had no idea what it was until I placed the cache and did the research. ) …”

I would never have found Clio, the Goddess of History, hiding out in New Orleans if not for geocaching. Thank you, Bamboozle for your research.

The statue was originally terracotta to showcase what the material could do. Unfortunately, it was vandalized in 1938 and replaced with the current cement statue that you see although the base is still terracotta. Well, they say cement and marble but I don’t see the marble unless it’s the base. The monument was called “Peace, the Genius of History“.

The Goddess of History stands across the street from the house where Edgar Degas stayed when visiting New Orleans. In case you don’t know, Degas is the famous French ballerina impressionist painter. He’d wanted to be a history painter so unlike other Impressionists who focused on landscapes, his repertoire celebrated people engaged in activities like dancing. I love love love his paintings and didn’t know he’d been to America, spending six months in New Orleans. His mother was Célestine Musson De Gas, a Creole from New Orleans so in 1873, he stayed at his uncle Michel Musson’s home. His brother Rene lived somewhere else in New Orleans.  Degas’ painting, A Cotton Office in New Orleans, was the only one purchased by a museum in his lifetime.

I didn’t know about the house when I walked by it. The house is now a Degas museum and a B&B. Although the tour reviews say there is no original art so maybe I didn’t miss much.  One of the docents is his grand niece and the reviews gave good points for a passionate tour about the Creole family rich from the cotton business that lost it all due to the Civil War. Others complained the tour could be a little more concise. Apparently it starts with watching a 1990 video that most felt they could’ve skipped as they were more interested in the real house. From the reviews, I’m not sure if I’m glad I missed the house or regret it as they are very mixed.

Speaking of houses, Edgar Degas had to sell his Paris house and art collection in 1873 after he returned home from New Orleans because his younger brother Rene had amassed large business debts. This forced Degas to produce more art as he now had to make a living from it. It’s one of those yin-yang things.  I wonder if he would have become a well-known artist if he had been able to keep his family’s wealth or if his brother’s misfortune ended up pushing Edgar Degas into fame. It’s also ironic that having had a Creole mother who probably had to face prejudices in her life time, Edgar Degas became increasingly prejudiced as he became older. Mary Cassatt, his friend although they clashed over his prejudices, “expressed satisfaction at the irony of Lousine Havermeyer’s 1915 joint exhibition of hers and Degas’ work being held in aid of women’s suffrage.” (Edgar Degas, Wikipedia)

Note: Geocaching caches come in different sizes.  Some are so small that only a tiny logbook fits inside like a magnetic micro I found in New Orleans.  Others are huge bins where you can leave behind a treasure or trackable for others to swap out their treasure or trackables. Swap, don’t just take. It’s bad manners to just take so put something of equivalent size/value in for someone else to find.  If you put in a geocaching trackable, you can see where it has gone.  One of mine has gone to the Galapagos Islands!

You can use the Amazon search bar to search for anything as I did with “1884 World Fair”. Results will vary.