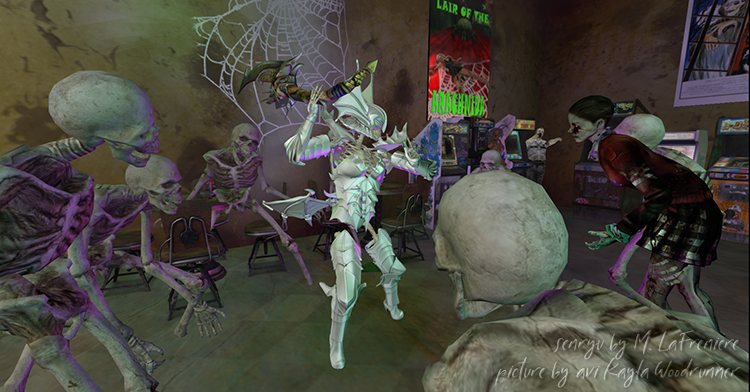 *Note: for fun I tried to write a haiku in an accent (can you guess which accent? I don’t speak it so may have gotten it wrong so maybe a bit challenging to guess) so the straight way is

Going to rumble
Skeleton horde and zombies
Halloween is here

(ok, if you guessed, I was going for a New York accent but I think I got it mixed up a little with my dad’s Massachusetts accent. oh well, it was fun to try to do an accent in a haiku)

Funny how a word can recall something specific.  For me, “rumble” always makes me think of the West Side Story and the Jets song.  My favorite West Side Story song is America, the juxtaposition of different experiences immigrants have and the anger versus hope that can result. Rita Morena in the film did her own singing in America except for the song A Boy Like That where Betty Wand’s voice was substituted for Morena’s.  Natalie Wood had expected her own voice to be used in the songs but Marni Nixon’s voice was substituted for all Wood’s vocals. Rita Morena won the Best Supporting Actress Oscar in 1962 for her role, the first time a Latina American won an Oscar.

Another favorite is the humorous Officer Krupke. The teens satirize the judges, psychiatrists, and social workers that fill their lives. You can hear the professionals talking at, to, and about the teens but not really with the teens.  The song plays out how sometimes the teens play the systems, sometimes they’re adrift being pushed from professional to professional, and sometimes their overriding anger takes over as they are constantly being defined while they are just starting to define themselves.  Yet the song’s humor like Mary Poppin’s A spoon full of sugar helps the medicine go down uses dance and laughter to dole out their pain as the teens recognize how others see them, “I’m a social disease” and the pathos of “They [my parents] didn’t want to have me but somehow I was had” with the double play on the word “had” (“being born” and “being taken advantage of”).

The evolution of the West Side Story is a convoluted one.  In 1947, Jerome Robbins asked Leonard Bernstein and Arthur Laurents to collaborate on his musical about an Irish Catholic boy falling in love with a Jewish girl who had survived the Holocaust. The girl’s family had immigrated to lower east side of Manhattan so the story was originally going to the East Side Story. Robbins wrote a first draft but the three men decided to drop the project when they realized the that story had been covered in recent plays.

Fast forward to 1955, stories of teenage gangs were making the newspapers bringing a new awareness of the social problem to the general public. The three decided to make it a story of a Puerto Rican gang versus a white gang threaded through with music with a Latin beat. They wanted slang and cursing for verisimilitude but four-letter curse words were rare in theater in the 1950s so they created their own slang. Budding composer/lyricist Stephen Sondheim was brought on board for the lyrics while Bernstein did the music.

The show almost didn’t make it.  Two months before they were due to perform, producer Cheryl Crawford dropped the project when they failed to get backers. Other producers wanted to have nothing to do with a depressing musical with it’s first scene ending in two dead bodies.  Sondheim reached out to his friend Hal Prince. Prince, who, despite his mentor George Abbot’s advice to have nothing to do with the project, stepped in, raised the money and allowed eight-weeks of choreographing practice rather the customary four as there would be more dancing than any of the other musicals on Broadway.

The show opened to critical raves about the innovative show. Walter Kerr of the New York Herald Tribune wrote “The radioactive fallout from “West Side Story” must still be descending on Broadway this morning. Director, choreographer, and idea-man Jerome Robbins has put together, and then blasted apart, the most savage, restless, electrifying dance patterns we’ve been exposed to in a dozen seasons …. There is a sneer, a hiss, a tempting and tantalizing thrust of an arm, and then… From this moment the show rides with a catastrophic roar over the spider-web fire-escapes, the shadowed trestles, and the plain dirt battlegrounds of a big city feud. .”

Robbins, Bernstein and Laurents wanted James Dean as Tony for the Broadway play but Dean died that year 1955.  While Audrey Hepburn among others were considered, ultimately Dean’s co-star from Rebel without a Cause, Natalie Wood, played Maria. They tried to get Elvis Presley for the movie but Colonel Tom Parker, his manager, turned down the role. Richard Beymer unsuccessfully auditioned for the role of Sal Mineo in Rebel without a Cause but later played Peter in the Diary of Anne Frank (1959) and became Tony in the film. Though Bryant was uncredited in the film, Beymer told interviewers his songs were done by Jimmy Bryant (not the guitar player with the same name who was also Bryant’s friend).

The film won 10 Oscars, the most of any musical. Only 10 musicals have ever won the Best Picture Oscar:

(These are blu-ray or DVD links to Amazon. If you have a movie streaming service, I highly recommend Oliver, West Side Story and Chicago. They are my favorites along with Mamma Mia!

which didn’t make this Best Pictures Oscar list.  And then theres… I could go on because as you can see I love musicals. See Amazon affiliate disclosure at the bottom. )

Ziegler is appearing in Music, a film written, and directed by Sia who stated on Twitter in May it would be released October 2019.  I don’t see that it in theaters yet though so maybe the release date has been pushed back.  Ziegler danced for Sia in her music video Chandelier in 2014 with over 2 billion views now.  She continues to dance for Sia but Sia’s videos continue to have a whimisical childlike quality to them.  Maddie’s recent duet with Michael Dameski gives you an idea of how she might appear as the teenager.

The 1961 movie made some changes from the Broadway musical. Stieglitz said he’d be truer to the Broadway version.  It’ll be interesting to see the remake and see what changes, what remains the same.

You can use the search bar to do an Amazon search as I did with “Bernstein Sondheim”. The results will vary.  I thought it would bring up some movies but it brought up a kindle book and music.

My being an Amazon affiliate does not affect your price. Amazon disclosure: “We are a participant in the Amazon Services LLC Associates Program, an affiliate advertising program designed to provide a means for us to earn fees by linking to Amazon.com and affiliated sites.”