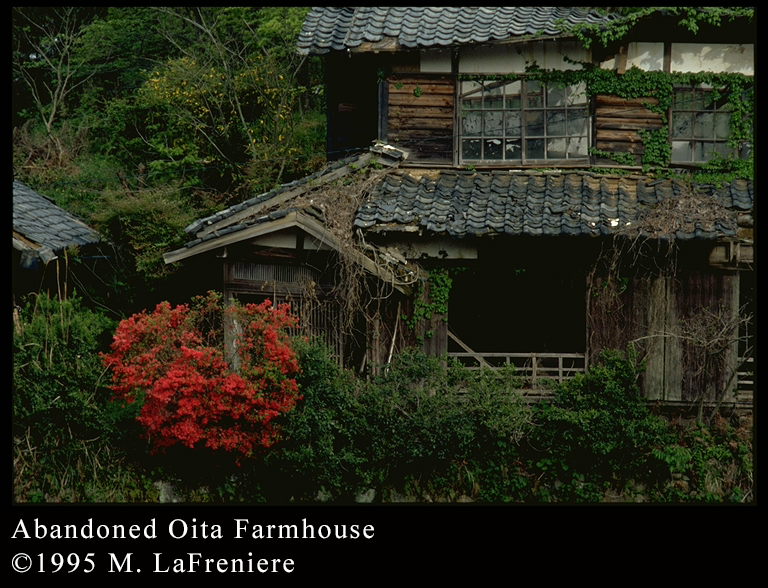 Basho visiting the warrior Sato’s ruined house reminded me of when I drove through Oita prefecture’s countryside in Japan.  (A prefecture is like a state or county). I remembered passing an old abandoned farmhouse. There is something about an abandoned house where once a family filled it… a loneliness dwells in that space.

abandoned farmhouse
where did all the children go?
who plants the rice now?

haibun and photos by M. LaFreniere

When I lived in Japan, most of the farms in Japan were family owned but farming is a hard life. So the children, with their university degrees, headed to the cities for easier jobs with higher pay. As adults they would come home on vacation during Golden Week to help their parents plant the ricefields for a week or two but escaped back to the urban life when their time off was done.

As the elderly passed, some farms were abandoned when the adult children didn’t take over.  Some villages tried to recruit new farmers from the city, offering land and a home to people to come and try the rural life.  I read an article featuring people excited as they first moved to their new farm. How did they do in the long run?

The Japanese government was subsidizing the farmers which helped because they wanted to ensure if Japan was ever cut off from international commerce, Japan could feed itself with food grown in Japan. Around the same time, other countries were pressuring Japan to start importing rice and other foods.

Japan did end up starting to import more foods so I don’t know how that affected farms. Truth though most Japanese I knew didn’t like foreign rice because it was different. I agree. Rice tastes different and doesn’t have the same texture depending on where it’s grown. Japanese rice is stickier which makes a huge difference when you’re making riceballs and sushi. American rice, for example, falls apart and is useless for that sort of thing although it’s good for making pilafs.

I also miss Japanese fruit.  Their mandarin oranges from Satsuma were huge and delicious! So juicy.  I’ve never had it’s equal here in Arizona. I’d eat a whole bag in one sitting, making my fingernails turn orange with the vitamin C influx.  Oh and the peaches!

All of this was twenty or thirty years ago so probably much has changed. The next time my friend Rie visits, I’ll ask her about what is happening with Japanese farms.

I wonder now if someone built a new home where this old farmhouse stood.

In response to a haibun challenge : Haibun Road

You can use the search bar to do an Amazon search as I did with “Japanese countryside”. The results will vary. Today I thought it was cool that Folktales from the Japanese Countryside

popped up. I love folktales. One of the writers I enjoy is Lafcadio Hearn, he wrote Kwaidan: Stories and Studies of Strange Things

in 1904, a small collection of Japanese stories with a supernatural flavor.  If you have Amazon kindle, you can read it for free–I don’t know for how long it’s free as it does have a sticker price crossed off.  If not, the Gutenberg Project also has one you can download free in various formats.

While I am an Amazon affiliate, this has no effect on your price. Amazon disclosure: “We are a participant in the Amazon Services LLC Associates Program, an affiliate advertising program designed to provide a means for us to earn fees by linking to Amazon.com and affiliated sites.”