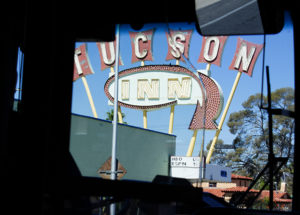 Tammy’s Neon Sign challenge is hotel/motel which I didn’t have. So I thought I’d be giving it a pass this week today but taking the bus to my brother’s house I spotted the Tucson Inn so I made it!  Yay!

I found out through wiki that it is Googie architecture, which I misread as Google at first.  Turns out “Googie architecture is a type of futurist architecture influenced by car culture, jets, the Space Age, and the Atomic Age. It began in Southern California with the Streamline Moderne architecture of the 1930s, and was popular nationwide during the late 1940s into the mid-1960s.” (Wikipedia)

Tucson Inn was built in 1953 and designed by Anne Rysdale, the only registered woman architect in Arizona then. It cost half a million to build, sold for two million in 1960 and was so popular they expanded the original buildings but when US 80 and US 89 was replaced by I10,  what once was a major corridor dwindled in importance causing an economic decline in here along with other areas once serving travelers. They tore down the expansion but the original buildings remained. In 2016, Tucson Inn was shut down for code violations citing unsafe building conditions and criminal activities. In 2018, Pima Community College (PCC) bought it for one million promising to restore and preserve Tucson Inn. PCC has also bought the Tucson Hotel & Resort, the Tucson Inn, the Frontier and the Copper Cactus Inn to expand their downtown Campus. PCC has already moved several neon signs from the 40s and 50s which are on display now on the north side of the PCC campus along Drachman,

This week is Tammy’s Neon Photo Challenge is hotel/motel. Starting Monday her next prompt will be plants, fruits or vegetables.

You can use the Amazon search bar to do a search as I did with “vintage neon signs book”. The results can vary on different days. Today I wasn’t suprised to see Vintage Neon

by Len Davidson with more than 350 vintage neon photographs including some from his Neon Museum of Philadelphia pieces. However I didn’t see Seltzer’s Vintage Signs of America

which looked like good books filled with neon photography too. Oh well, maybe next time.

My being an Amazon affiliate does not affect your price. Amazon disclosure: “We are a participant in the Amazon Services LLC Associates Program, an affiliate advertising program designed to provide a means for us to earn fees by linking to Amazon.com and affiliated sites.”