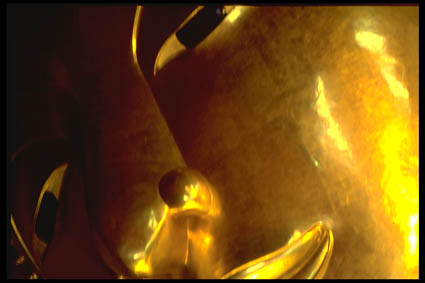 This was originally published October 19, 2017 in response to a Heeding Haiku prompt.  I am reposting it for the Haibun Road Week 3 because of the boat.  Basho mentioned a boat so I immediately thought of this.  I’ll also come up with a new haibun too later this week.  I hope you will join me on the Haibun Road.   The senryu was written in 2017 but the travel narrative was originally on my old website, hungryflower.com 30 years ago.  My memory is not that good! Well, actually I do remember a lot of this as coming across my old writing triggered a flood of memories).

Within Wat Pho, a giant reclining Buddha gazes sleepily down upon pilgrims and tourists.

Once upon a time (30 years ago), Rie and I met up in Bangkok.  Weird things happen when we travel together.  Ummm, I’ll save up our airport story for another day.  On this day, Rie wanted to go to Wat Arun, a very famous temple across the river.  We decided to go by ferry boat, similar to a regular bus service, running up and down the river. The ferry boat is much cheaper than a tuk-tuk.

As the ferry pulled up, locals jumped on, Rie too. Her years dashing onto the Tokyo subway has served her well. Three monks were behind me. As I reached out to jump on, the boat started moving away. Now Chao Phraya River was the color of slow moving mud served up with a layer of garbage, plastic and disintegrating stalks. I pulled back, fearing to miss the boat and land in that muck. So here I was with three monks on the dock, too polite to push me out of the way to board.  Look there Rie goes, floating away on the boat! Whoever heard of a ferry that doesn’t wait for all of its passengers to board?

Like a warped vision of a romantic movie, Rie calls ‘Mary.’ And I return, ‘Rie’. Ah, but no worries. I see another ferry coming immediately behind. This one I jump on first before it can leave. The monks stride on close behind. As the boats pass each other, I yell to Rie that I would meet her at the agreed-upon stop. Little did we know that these ferry boats don’t stop at every stop. When the moneytaker comes around to you, you’re supposed to tell them where you want to get off as you give the money — further stops means more fare. Well, we didn’t know that. We just paid. Being a tourist when you don’t speak the language has a few pitfalls.

So neither ferry stops where we expected. Rie ends up on the other side of the river. I end up too far up. So I ride back down and end up too far down. Then too far up. The darn ferry keeps skipping my stop! Confused but persistent, I decide to walk back down to the mysterious nonstop.

I loved the walk. Street vendors crowd the sidewalks and it was like exploring a long vertical swap meet with used to new goods. Meanwhile Rie is riding back and forth across the river. She too kept landing one stop up or down but would hop another ferry, hoping the next one would get her to the right stop. The moneytakers started giving her strange looks as she kept returning like a syndicated rerun.

I never did get to Wat Arun but I took pictures from across the river while I waited at the ferry stop.  Evidently the stop Rie and I had chosen was not a popular stop because the ferry never came as the afternoon hours passed. As the sun began to set, I shot some twilight shots of Wat Arun and then headed back to the Guesthouse where we were staying. Naturally, I took the bus on land!

After a shower, I sat down to write in my journal while I waited for Rie to come back. I felt at peace as I had enjoyed photographing while I waited.  Taking photographs stills my mind. Rie stormed in shortly afterward, not a happy camper. She was especially disgusted to see me already showered and relaxed as if I’d been there for hours.

Poor Rie. On the other hand, she wrote the incidents up as a comedic travel article in a Japanese magazine and made some money from it.

Still I did learn how to use the ferry system so I had no problem getting to Wat Pho the next day. Jump on fast! I met Rie at the ferryboat stop near Wat Pho. She was late since someone had stolen her sandals. When you enter the guesthouse, you have to take your shoes off just inside.  We didn’t know that the savvy traveler stored their shoes up in their room.

It’s a pity Rie didn’t go with me to Wat Pho. Lonely Planet says it also is the national headquarters for teaching traditional Thai medicine including massage. Rie really could’ve used the massage after her sandals were stolen, not to mention the day on the ferry. Wat Pho is a lovely, peaceful place.

Heeding Haiku with Chèvrefeuille, very cool poetry challenge.  He presents a haiku by a classical master and asks that you write one inspired by it.  Today’s choice was by Basho.

Reclining Buddha face by M. Nakazato LaFreniere. Unfortunately I don’t have the other photos I took at the time.  It was on a hard drive that died.  Luckily the Buddha Face was on my Hungryflower.com site so I still have that.

As an Amazon affiliate, I may earn a fee if you click on the above links and and make a purchase. This has no effect on your price. Amazon disclosure: “We are a participant in the Amazon Services LLC Associates Program, an affiliate advertising program designed to provide a means for us to earn fees by linking to Amazon.com and affiliated sites.”