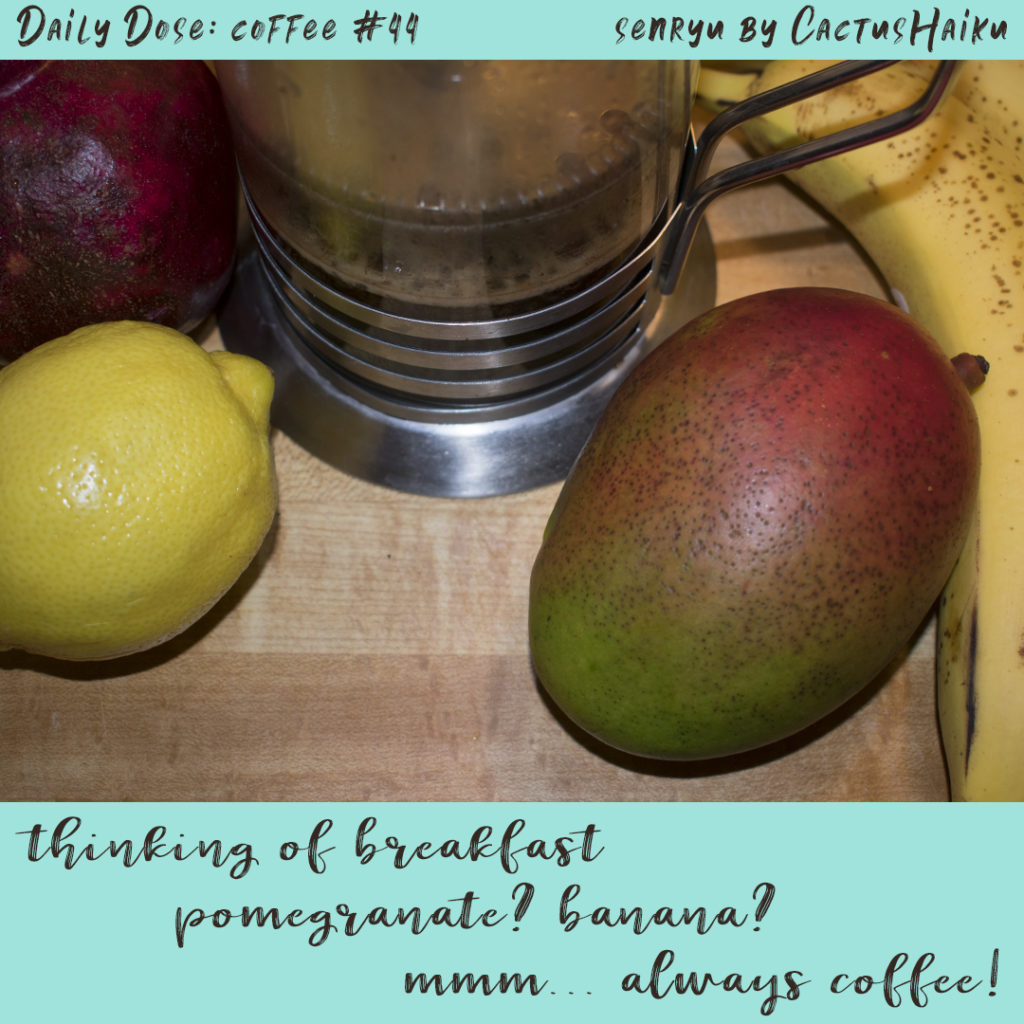 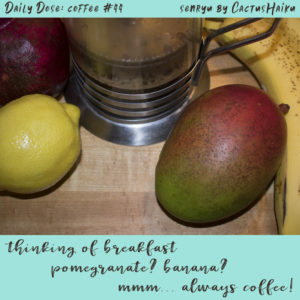 Used to be breakfast was coffee and bread slathered with cream cheese, a pastry or a slice of cake or pie. And of course, coffee.  Well, sometimes tea. Sighs. Those were the days.

Nowadays, I try to eat healthy so it’s fruit. Occasionally an omelette but generally fruit. Bananas are my favorites because they’re easy.

Mangoes are good but I wish I knew the trick where you slice it, flip the skin and it all comes off easy. I make a bit of a mess with mangoes but it’s worth it.

Pomegranates are in season now. Makes me think of Greek myths — Hades and Persephone, the promise that as winter comes, there will be spring later. Nowadays he wouldn’t have gotten away with kidnapping a relucant bride.
I wonder how we would write that myth these days? We still need a myth for winter and spring but unwilling women? Nope, that’s not okay. Even if you are big and powerful.

I’d rewrite the myth that Persephone so she is not his child bride. Nope, Hades married Demeter and they had one child: Persephone. Since they had Persephone, when they divorced Hades and Demeter got divorced and agreed they’d share custody. Hades gets Persephone six months a year and so does Demeter. Demeter can still mope when she doesn’t have Persephone bringing winter to the world.

Forget that Hades and Demeter were brother and sister — when you’re a god/goddess and have to marry a god/goddess at your level, your options are limited.  Intially they fell in love because opposites attract.  Demeter ruled green growing living things while Hades ruled the dead.  The problem is differences while exciting at first may chaff later.  Demeter got tired of Hades dour personality while Hades got tired of her insisting they live above ground.  Demeter is the outdoors type who loves hiking and sleeping under trees. Hades was the urban type and felt he had a perfectly good huge castle but she didn’t like the neighborhood.  It was dark with no sun or moon. Over time, he became affronted that she also didn’t like being around his subjects either since they were … well… dead.

Ok, what about the pomegranate? It was only after eating six seeds that Persephone had to stay six months.  Hmmm…

How about Hades and Demeter have a bitter custody battle? Demeter was refusing to share custody and kept Persephone all year long while she was growing up. Demeter does not want her child to spend any time underground where Hades lives.  She does not like the neighborhood or the people. Hades, of course, feels there is nothing wrong with his neighborhood and his people even if they happen to be dead.

During Persephone’s elementary school years, Hades leaves it alone as he’s an old-fashioned kind of guy and figures maybe a girl needs her mom during her early years.  So Demeter relaxes and thinks she can have Persephone forever … or until she grows up.  I imagine it might take a goddess a long time to grow up since they’re immortal.  The two are close and Persephone knows nothing of her father.

Once Persephone becomes a teen, Hades thinks she’s old enough to be away from her mom and should get to know her dad.  After all, this is a time when some teens get married and leave home.  Demeter says no.  Not even a trial visit.  She doesn’t want her daughter hanging around dead people and ghosts.

So dad Hades kidnaps his only child. Demeter runs to Zeus to have him order Hades to give back Persephone at once.  Zeus and Demeter got along okay as she visited Mount Olympus often.  Zeus and Hades not so much.  So Zeus is inclined to agree with Demeter. Hades rarely if ever came to Mount Olympus. As the oldest brother, Hades was not always happy that Zeus was the God of everything with Zeus while he had only the domain of the dead but what can you do?  The three brothers drew lots and that’s the way it went. Hades was a bit of a grump but impartial with his subjects and ruled his domain well.

Hades offers Persephone a feast, gorgeous gowns, lovely jewelry and anything else he can display.  He knows bribing won’t work long term but figures he has to make a good impression fast because Persephone is pretty upset about being kidnapped and he wants to convince her that she might want to get to know her dad better.

Persephone is a little shocked to find out Hades is her dad.  Her mother always said her dad was with the dead … not that he ruled the dead.  She’d always thought perhaps he’d been a Titan or something and got killed by a hero somehow.  She’s pretty mad at her mom but she doesn’t want to stay down in the underground either as she’s used to sunshine and it’s pretty scary in this dim world.  Plus she’s mad at Hades for kidnapping her even if he was her dad.  She thinks he should have figured out another way to introduce himself to her.  Being mad at everybody and not wanting to live with her mom or her dad as at the moment she feels neither are trustworthy, Persephone isn’t hungry.  Out of politeness though, she eats a bit of the pomegranate.  They are out of season, after all, and she loved the little ruby jewels of sweetness.

Zeus and Demeter storm in to take Persephone back topside.  Hades says no, she has to stay with me because she has eaten the food of the dead.  Everybody starts shouting which creates a lot of earthquakes topside.  That’s what happens when gods and goddesses shout underground.  Athene’s temple falls down.  Now she’s pissed and dives underground to find out what the hell is going on.

Athene listens to everyone. Demeter wants Persephone year round and so does Hades.  Persephone at the moment doesn’t want to live with either of them.  Persephone is particularly upset because she feels lied to by both as well as kidnapped.

Athene explains to Persephone that her powers will start rising and as an adolescent goddess they will be rather erratic so she needs to stay with an adult god or goddess in case she has a dangerous surge.  Athene also explains as she is half death goddess and half harvest goddess, she needs to understand both sides of her powers and at the moment she only knows the harvest half.   Therefore, Persephone must spend 6 months underground with Hades each year until she is an adult to understand her father, her powers, and the domain she might one day inherit.  The rest of the year she will be with her mother.  When she is an adult with her powers under control, she can make her own choices.

Athene says to Persephone, “Their shouting caused the earthquake?  Do you know what your anger and hurt caused?”

Persephone, “I didn’t do anything.  I’ve been stuck here while everybody else decides my life.”

Athene teleports Persephone to her temple which has fallen into rumble on the ground.  Nearby, a grove of trees look dead, their leaves blackened and falling to the ground.  Until then, the plants were green year round.  There was no autumn or winter, just an everlasting summer.

Persephone pouts, “But Zeus doesn’t do that.”

“Zeus is not a good role model,” Athene replies. “His temper causes lightning storms and things or people get killed but it’s usually just the one that gets hit.  One human, one tree.  With you, you can kill off a forest in a tantrum.”

“Guess what, kid.  Parents make mistakes.  They aren’t perfect.  Your problem is both of your parents love you too much and both want to spend time with you.  That’s not a bad problem to have.  Especially since they came from a dysfunctional family and had a dad who swallowed them at birth and then had to regurgitate them fullgrown.  Growing up in their father’s stomach gave them some issues. Give them both a break.”

“You can talk to them about that.  Let’s go back.”

And so it was decided. Demeter and Hades had shared custody.  Demeter was so pissed off, she introduced the world to winter for the first time during the six months her daughter was underground letting the plants die to remind people her child was with death.  Humans learned to dry and can plantfood but mostly hunted to survive the winters at first. When Persephone returned to her, Demeter showered the earth with spring, fertility and growth.

Hades taught Persephone the value of death, how to compress the spirits as more and more people, animals and plants died and entered their domain.  She loved making pocket universes specific to an animal’s needs or for a new culture created by humans. What she learned below, she brought upstairs and started creating new types of plants and insects.  Demeter helped her with new growing power of hers. Life and death was different than she thought but she learned to enjoy both.

What do you think? Does that work as a modern retelling? I’ll have to flesh it out, of course. And since the Underworld also represents the unconscious, that gives Persephone the role of the inner child. And we get away from the childbride/rape/forced marriage scenario. Yeah, I know, it’s a myth which is not real but I think myths show a culture values and fears which is why they tend to evolve or become different as the culture changes.  So I want to change the Persephone myth. What about you?