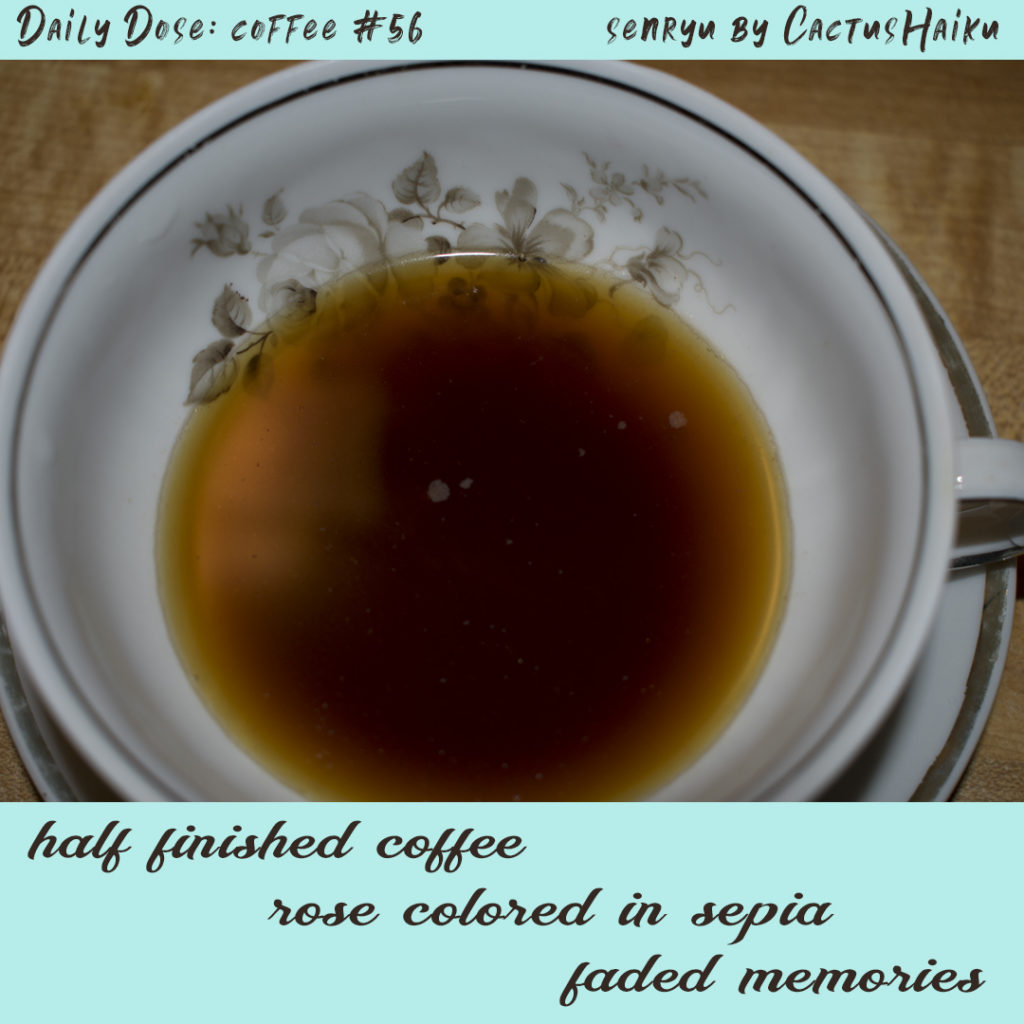 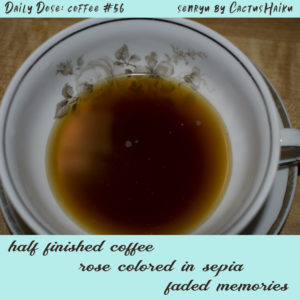 senryu and photo by M. LaFreniere, all rights reserved

My mind wanders during coffee break. Contemplating the surface of a half-finished cup, memories play across liquid, a cross between a dark oracle and the silver screen.

Black Friday, this is the day. On October 24th, 1929 (Black Thursday actually but hey, give me poetic license ok?) the market crashed and the once-rich flung themselves from offices to their death rather than face poverty.

The thing is I love Black Friday. I love sales and bargains. If we can shop, we won’t crash, right?

There actually were many Black Fridays historically, none of them happy.  Here are some November ones.

Black Friday, November 18, 1910.  300 women marched to the House of Parliament in London to demand the right to vote.  For six hours, male bystanders and the police beat them  and sexually harassed them (pinching and wringing their breasts).   Two women died as a result of the abuse.  After that, the women stopped doing protest marches as too dangers and instead would throw rocks at windows or things of that nature because it would give them time to disappear before the police came.  Churchill refused to investigate the police abuse.  Despite photographs showing a beaten women at the feet of several police officers that the newspapers published, the newspaper story stated the women did the abuse and not the police.  The newspapers did not report the violence the women suffered that day.

Haymarket Massacre, November 11, 1887. March 4, 1886 a rally convened to support a worker’s strike for an 8-hour day and because the police had killed several workers on March 3.  Though initially peaceful, it ended when the police arrived to break up the meeting.  Someone threw a dynamite bomb at the police, killing 7 officers and at least 4 others at the rally.  After that eight anarchists were arrested even though it was known none of them had thrown the bomb. Six of them were known to be at other locations when the bomb went off and not even onsite.  Two of them were leaving the speaker’s wagon because the police had asked them to step down.  They were in plain sight of the police and could not have thrown the bomb. Evidence was shown that one person may have built the bomb.  When Lingg’s apartment was searched, bombs and bombmaking supplies were found.  No actual bomber was brought to trial. All the jurors admitted to being prejudiced against the defendants as was the judge. Jurors were not randomly chosen. The bailiff specifically chose jurors that were prejudiced and would convict based on their social position. They were tried, not based on evidence, but based upon the writings and speeches they had made previously in support of their political beliefs (anarchy). Seven were sentenced to death by hanging and the eighth to a 15-year sentence. Lingg committed suicide in jail rather than be hanged. Four people were hung on November 11th.  Two others were supposed to be hung but the then Illinois governor Oglesby commuted their sentence to lifetime before the 11th. At the time and to this day, the trial is often described as a “miscarriage of justice.” In 1893, the next governor criticized the trial.  Wikipedia stated:

On June 26, 1893, Illinois Governor John Peter Altgeld, the progressive governor of Illinois, himself a German immigrant, signed pardons for Fielden, Neebe, and Schwab, calling them victims of “hysteria, packed juries, and a biased judge” and noting that the state “has never discovered who it was that threw the bomb which killed the policeman, and the evidence does not show any connection whatsoever between the defendants and the man who threw it”. Altgeld also faulted the city of Chicago for failing to hold Pinkerton guards responsible for repeated use of lethal violence against striking workers.

Paris Attacks, November 13, 2015. Three suicide bombers attacked a football (soccer) match at Stade de France in Saint-Denis while gunmen shot and killed 90 people, then took hostages at an Eagles of Death Metal concert in the Bataclan theater.  There were also mass shootings and a suicide bomb at cafes and restaurants.  While seven attackers died, they killed 130 people and injured 413 others.  The Islamic State of Iraq and Levant (ISIL) claimed responsibility.

Ragtag Community features a daily prompt is presented by a different person for each day of the week. Come and participate by posting writing or images evoked by the word and add your pingback or link to the comments there. Hope to see you at Ragtag Community!

Use the Amazon search bar to do any search at Amazon