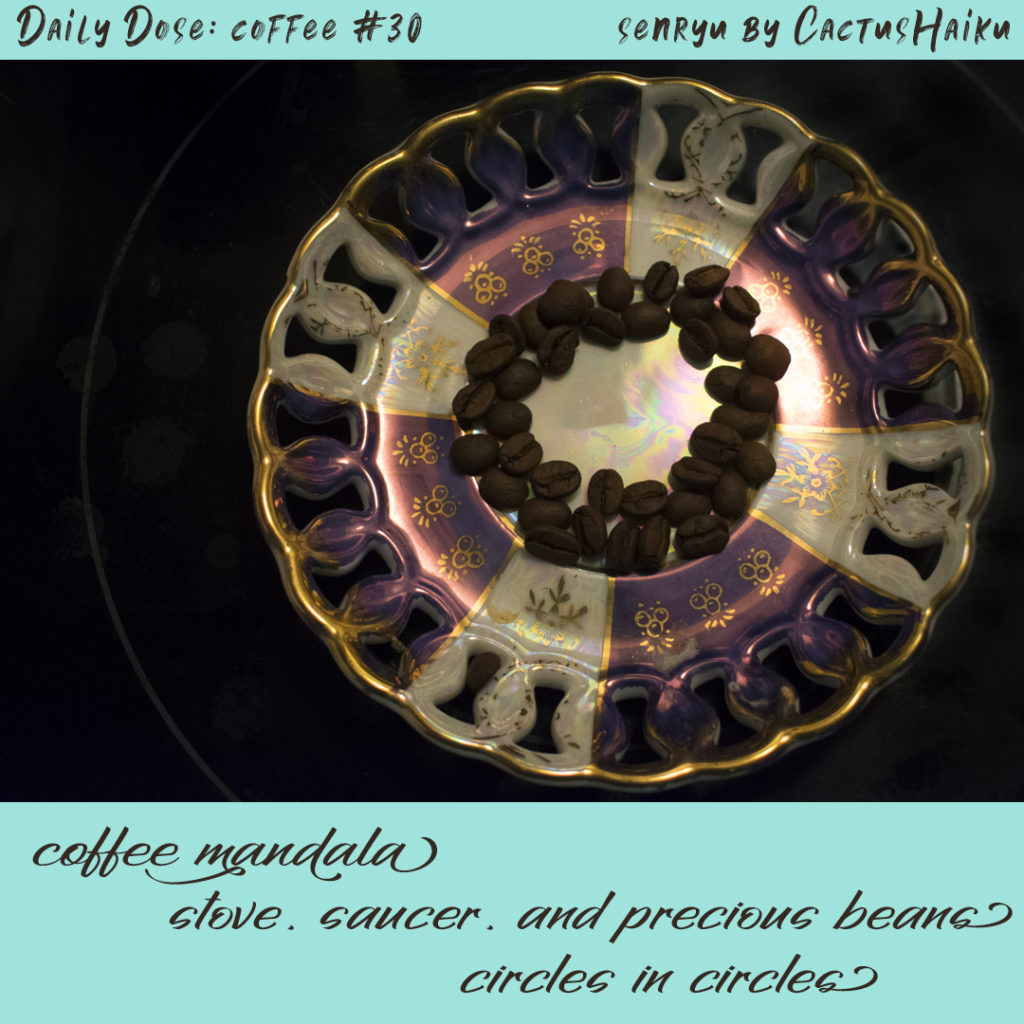 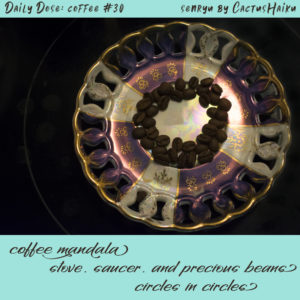 so it’s been a bit of a learning curve for me this week.  I’m taking a course on Instagram but have gotten a little derailed.  Meaning spending too much time on IG rather than doing the coursework.

First I made a coffee video with my changing mug.  I did try to do it with my camera but hard to hold a camera while you’re pouring so I did it with my phone.  I had to switch from coffee to water because I spilled while pouring.  But I go the video done as you all saw.

Winter watched it and said, “why were you sniffling? sounds like you have a cold?”

“What?  I was not sniffling! I thought there was no sound on it.”

Turns out on IG, it plays without sound at first until you touch the video and then the sound comes on.  The sound of pouring water.  That’s ok.  Then … sniffling.

“Oh, no.  I was sniffling!  Ewww!”  Well, I had been on the verge of a cold but no need to share that with the world.

Wait! I did share it with the world!  How many people saw it?  38 people liked it and I got 2 comments.  Well, maybe they didn’t touch it so didn’t hear me sniffle.  Hmmm, 29 views but 38 people liked it?  How does that happen?  Oh, they didn’t finish watching it.  They never go to the infamous sniffle.

“Or,” Winter said, “they are making a sniffle funniest video on youtube and you will have a famous sniffle.”

Omg! “No one would do that.  Who would make a video of sniffles?”

“People will do anything.”

Meantime, back at the ranch, I had already uploaded the video a few days ago on Cactus Haiku too.  Geez.  That has 11 likes and 44 views.

Oh look, you-tube has a sound tab. I can add music to cover the sniffle.  Added the first free sound file that was 45 second long, the length of the video.  Since you can do that on the fly on you-tube, the video never changed it’s url.  That fixes my wordpress video although it does nothing for my IG video.

Listens to the video.  “Yeah, it does sound like the crescendo of an opera but it staying.  It’s 45 seconds long.”

So ends my misadventure with a coffee video  — oh yeah, I didn’t film the coffee — my water video in a coffee cup?  doesn’t have the same ring somehow.

A couple days later on Instagram, I went from two or three new people following me daily (with one or two dropping me — IG people do that) to 300 people jumping on board.  I jump from 365 followers to 790. OMG! I hope it’s not the sniffle!

Oh good, it looks like people are hitting the baklava picture.  Huh.  Do people love baklava that much?

All these people are entertainers: actors, musicians, producers, and models and a lot of them are in bikinis.  They can eat baklava and still flex their abs while standing topless?

Lucky them!  I eat one baklava and I gain two pounds.  Seriously!  I weighed myself after.  I am finding there is a mathematical equation.  Any sugar into the body equals four times the weight onto the body.  Looks sidewise at the model.  No way she eats baklava.

No. no. no.  I am not posting a baklava picture everyday.  I love coffee.  I am sticking with coffee.  Even Pavlov’s dog has his limit. Another 50 people dump me.  Geez.  Clutches my coffee.  Breathes deep.  Takes a sip.

Okay, remind me why I’m doing this?  Oh yeah, people who get tens of thousands of followers can get sponsors.  I want to go on a roadtrip with my cats following a historical trail so I need sponsors to provide an RV, gas and money.  It’s a long shot, I know.  Looks at all the people dumping me. Yeah, it’s a real long shot.

And I know I’m supposed to do an IG feed just on one subject but mine alternates between daily coffee, geocache, art and food. Oh and occasionally the cats.  Still I think that would work for a travel feed because that’s what I like to photograph and what can be photographed anywhere.  I know i’m supposed to photograph myself and post it but I’d rather do art.  I’m shy and the idea of posting my face and/or body all the time just weirds me out.  And yes, I did drop from 252 pounds to 208 but I’m not ready to wiggle my belly for all to see.

(See and that just proves my point.  I’ve tried numerous times to lose weight and they didn’t work and then four months ago, I attempted it again and this time it worked.  You just never know what will work but you just have to keep trying different ways)

Yep, it’s a long shot.  But it will not happen if I don’t do anything and just wish for it.  And I’ve found out over half a century of living, that when you do things towards your goals, even if those actions don’t reach your goals, they can trigger other events or doors opening that get you there in the most unexpected ways.  That’s how I ended up living in Japan teaching English eons ago.

See, paths branch.  When you learn something, it leads you to learn other things that you didn’t know existed before.  Like my sniffling video leading me to learn that you-tube lets me add copyrightfree music when I upload a video. I thought you had to do it yourself before you added it to you-tube which meant buying a program. (Okay, Winter gave me his old program that he’s not using any more– but it’s hard! Driving me nuts)

Meeting people leads you to meeting other people.  Actions lead to new actions.

I don’t know if IG will lead me to traveling in an RV. Looks down as a handsome topless male model drops me.  Sighs.  Deletes him from my following list.  (Drop me, ha!  I’ll drop you!).

All those entertainment people are falling off following me but they have triggered some sort of introduction and lately travel photographers have started following me.  Hope they stick around.  Maybe I’ll meet them on my roadtrip.

Better go back and open my IG coursebook again. I need to finish this class.

One thing for sure, I don’t care if it takes me a year or ten, I’m going and so is Pinkie and Midnight because I can’t leave them behind.

Like my mom always said, there’s more than one way to climb a mountain.  And what I say is, keep climbing, you don’t know which path will get you to the top so try a few.  At least, you’ll get into shape while you try.