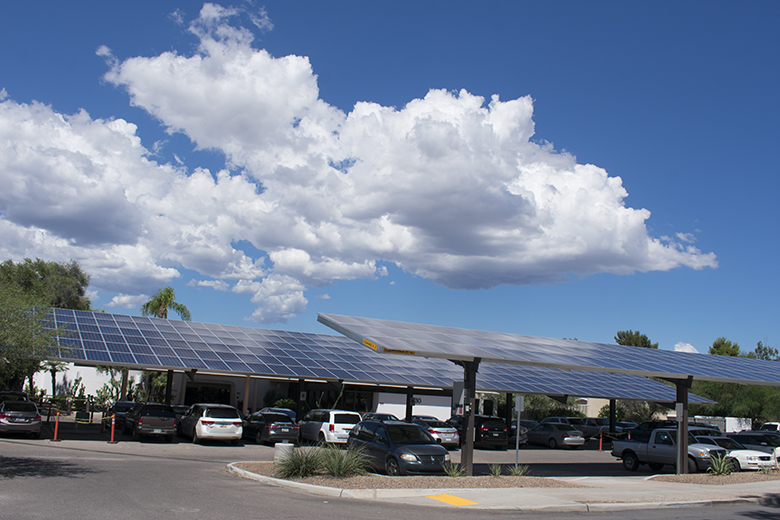 To say Arizona is hot is like saying a burning furnace is hot when the heat blasts out. Tucson gets sunshine 85% of the time — not as much as Yuma which is 90%.  So honestly very few are willing to ride the bus.  Most people drive and parking is free.

Parking is free but unshaded so people vie for the rare spot by a tree to keep their car cooler.  Then this summer, Wilmot-Murphy Library roped off most of the parking lot to put up covered parking …. with solar panels!  A two for one.  It makes sooo much sense.  It was a joint project with Pima County, Tucson Electric and Power, and the Solon Corporation who constructed it.

I was surprised that this was already an ongoing project and they had constructed solar parking panels at the various Pima Community College campuses, Pima Air and Space Museum, Kino Stadium, a number of Pima County buildings, several school districts, the YMCA, the Humane Society and a number of other places.

I am pretty impressed.  I’ve seen solar panels before like the ones they put up on the base but they are just standalone structures taking up space with only the one use and even in Arizona land is precious.  Parking lot structures makes more sense to me because the land can be used for two purposes.

Most people buy those cardboard things to put in their windshield so they don’t burn their hands on their steering wheels when they come out (seriously hurts — I’ve done it! After that I bought the cardboard thing).  So there is a potential if the practice can also spread into huge commercial parking lots like the mall, that people won’t need to buy the cardboard protectors which would reduce waste too.

I just love that Pima County did this.  And they didn’t even use tax dollars.  I don’t know if they got a grant or if they were able to get TEP or Solon Corp. to put up the money but it’s nice that we didn’t have to pay.  And honestly, even if we did have to pay, this is one item I don’t mind paying for because the long-term benefits are obvious.  Supposedly our energy costs will go down but I doubt it.  I just think for our state this is a better way of creating energy than nuclear plants, windmills, dams, etc.  Palo Verde Nuclear Plant is just 45 miles from Phoenix and is the largest power plant in the USA based on net generation.  In 2011, the NRC renewed their license for another 40-60 years. I would really like to see it shut down.  The problem with nuclear plants is the nuclear waste and shipping it off to another state or country doesn’t really fix the problem. It just gives it to someone else.

With 85-90% sunshine and huge acres of parking lots everywhere in every city and town across the state, if we could do more collaborations between not just county governments but also commercial interests and the electricity companies, there might be hope in 40 years to not renew the Palo Verde license.

This is one governmental initiative I think is great.

This RDP prompt was from Tuesday actually but I had to go take the photo so it was a tad delayed.  Today’s prompt is actually “tenacious” if you want to hope over there.
RDP# Tuesday Prompt: ENERGY
Ragtag Daily Prompt
from Margaret, Pyrenees to Pennines
The Ragtag Daily Prompt now has it’s own blog site called the “Ragtag Community“. Each day of the week a prompt is presented by a different person. Come and participate by posting writing or images evoked by the word and add your pingback or link to the comments there. Hope to see you at Ragtag Community!