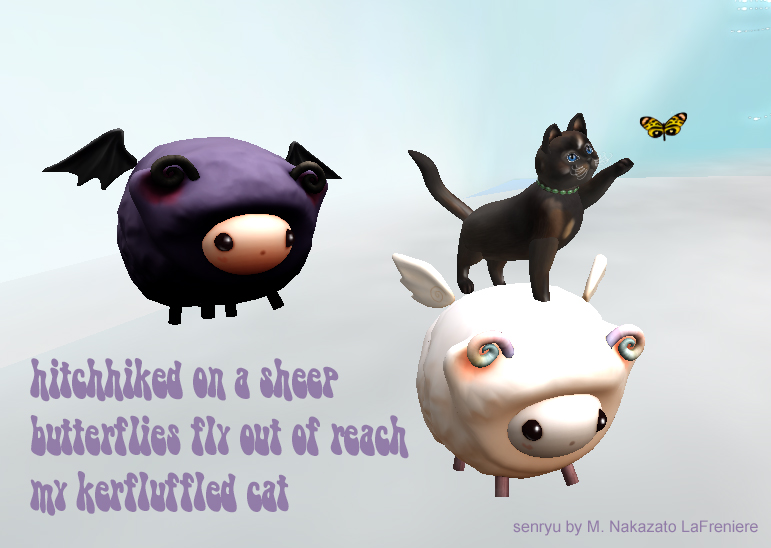 the word of the day is Kerfuffle

Merriam-Webster (their word of the day 8/1/2016) defines kerfuffle as “a disturbance or commotion typically caused by a dispute or conflict” and gave these two examples:

In all the kerfuffle, nobody seemed to have noticed Harry, which suited him perfectly.      — J. K. Rowling

But I misread it as “kerfluffle” which doesn’t exist except in the urban dictionary which has a number of people popping in a definition:

Taylor (2004) says: noun. a disturbance or hubbub; a small scale disturbance. an upsetting event
Due to yesterday’s kerfluffle, I will be leaving the community.

Samishii (2011) says: Verb: To rile up, confuse, or anger a cat (especially kittens) into fluffing up. Sometimes results in a cat spazzing out and running around the residence.
The cat was so kerfluffled you could hardly see its legs under all the fur.

jojociecie (2010 says: Lots of confusion, things in an uproar, (chaos!)
Phone ringing, doorbell ringing, lots of mail, and your dog ran away…all at the same time!! That’s a real kerfluffle!

TheWonderfulWizardofOz (2017) says: To create or cause a fluff.
Sam caused quite the kerfluffle when the cats came in the room.

Mksjdjdhsjjdncs (2017) says: Wacky or weird
That movie was weird. It really was kerfluffle

one epic person (2012) says: Kerfluffle means everyone and everything, all that once was and all that will be. Kerfluffle is the line between love and hate, life and death. Kerfluffle can see into your mind. Kerfluffle, CAN SEE INTO YOUR SOUL!!!!
kerfluffle is completely epic.

a. panda (2006) says: a mistake; something that wasn’t planned to happen
yesterday at work, i filed the wrong papers. that was a big kerfluffle.

Veronica, a British journalist, says “kerfuffle” is often pronounced “kerfluffle” in the United States in the radio show A way with words

The Fanlore wiki said “Another reason is that some fans use “kerfluffle” when they want to mock the content of a kerfuffle further, because it makes the spelling connection to “fluff” and implies a lack of substance or sometimes a playful argument. ”

Why all the brouhaha?  Kerfuffle is a relatively new word.  Merriam-Webster explains the evolution:

Fuffle was first used in Scottish English, as early as the 16th century, as a verb meaning “to dishevel.” The addition of the prefix car- (possibly derived from a Scottish Gaelic word meaning “wrong” or “awkward”) didn’t change the meaning of the word considerably. In the 19th century carfuffle, with its variant curfuffle, became a noun, and in the 20th century it was embraced by a broader population of English speakers and standardized to kerfuffle. There is some dispute among language historians over how the altered spelling came to be favored. One theory holds that it might have been influenced by imitative words like kerplunk, where the syllable ker- is simply added for emphasis.”

In the 1960s, UK journals often used “kerfuffle” to describe tiffs in the British royal family.  Brendan Buhler, in 3-27-2005 LA Times, lamented Wall Street Journal created a brouhaha when they called a controversy a “kerfluffle”.

So somewhere between the 1800s when it was “carfuffle/curfuffle”, it changed to “kerfuffle” by the 1960s.  The truth is simple.  The word is still evolving.  It is not set in stone.  Probably at one point people were arguing over the spelling of “carfuffle” versus “kerfuffle”.  “Carfuffle” lost.  Now there are whole threads of people arguing over one L or two.

A company has even named there peanutbutter-marshmallow product “Kerfluffle”.  Want to make a bet that they will tell people to desist using “kerfluffle” in writing as they try to hang on to their, no doubt, trademarked name.

Me what do I think?

In Second Life, Half Deer made and sold fluffy flying sheep called Kerfluffle in 2015.  So, um, that’s what I thought a Kerfluffle was, a mythological flying sheep usually seen when counting sheep during insomnia and giving random cats rides while chasing butterflies.  I’ve seen them occasionally when I am finishing a post at 5am and realize the sun is rising.  Hmmmm, maybe I should add that to the Urban Dictionary.

What do you think of kerfuffle or kerfluffle?

The Ragtag Daily Prompt now has it’s own blog site called the “Ragtag Community“.  Each day of the week a prompt is presented by a different person.  Today’s is “kerfuffle” by Gizzylaw, Talkin’ to Myself. Come and participate by posting writing or images evoked by the word and add your pingback or link to the comments there.  Hope to see you at Ragtag Community!