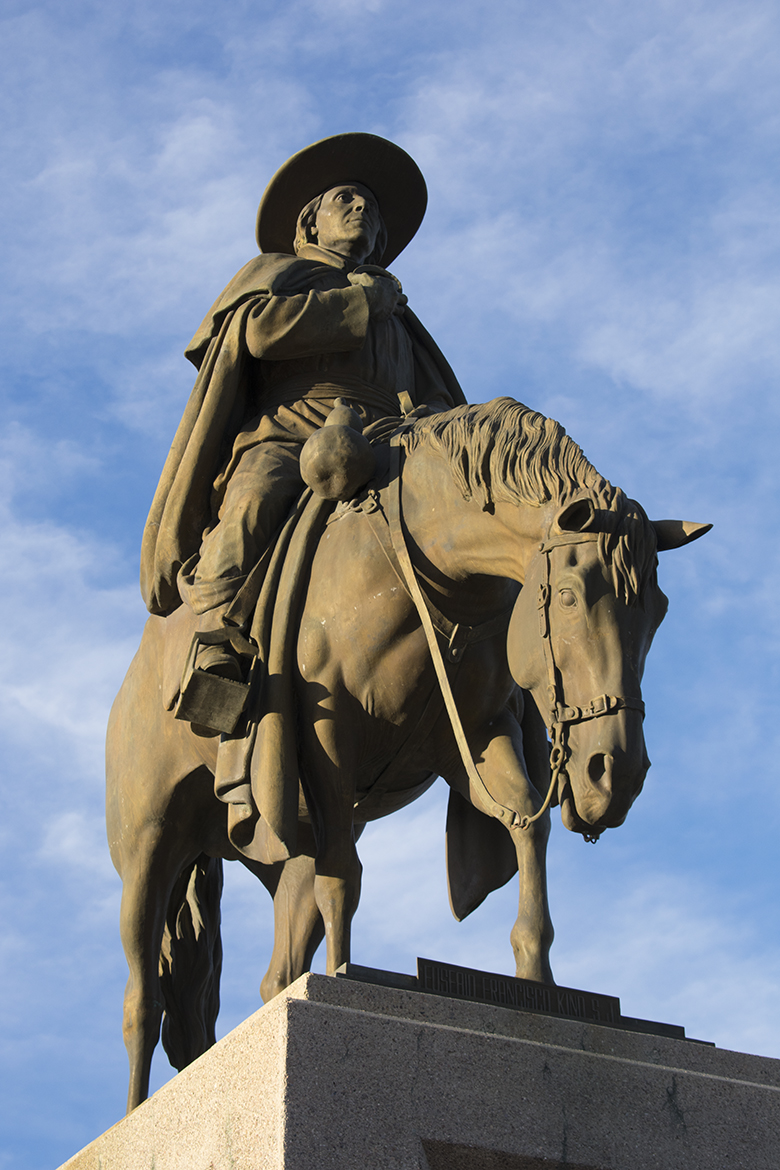 Jesuit Father Eusebio Kino founded San Xavier del Bac Mission in 1697.  Father Kino began his career in the Americas by leading the Atondo expedition to the Baja California peninsula. By 1720, his explorations of the peninsula and the Colorado River convinced Kino Baja California was not an island as drawn on European maps of the time.

In 1705, Kino published a map showing the peninsula connected to the land mass but it was not until a hundred years later that the “Island of California” disappeared off of North American maps.  By the time he died, Kino had followed Native American trade routes, covered 50,000 sq miles on horseback and mapped an area of 200miles by 250 miles, much of it unmapped by Europeans before.  Many of the missions he founded can be seen on his map.

Father Kino opposed the Spanish enslaving Native Americans to force them to labor in the silver mines making him controversial to other missionaries and the Colonial Spanish government.  Father Kino founded many missions in Pimeria Alta which in modern times is divided into Sonora, Mexico and Arizona, United States.  Native Americans would travel to him to request he set up a mission in various locations because he focused not only on religion but also on teaching and sharing agriculture and ranching.

Starting with 20 cattle, Father Kino eventually grew his herd to more than 70,000 but they were not all on one ranch.  As he set up a new mission, he would have cattle brought in.  The local Native Americans were taught how to breed and care for the livestock and herd them to new locations when he would send a splinter herd.

For example, in 1697, he sent 500 cattle as well as goats, sheep, horses,  and oxen to the Mission at Cocóspera.  However, in 1698, the Apaches and their allies attacked the mission, burning the local Pima village, and stealing the livestock.  The Pimas abandoned the area for two years.

Unlike the Apaches, other tribes sought out Father Kino including the Cocopa, Eudeve, Hia C-ed O’odham (called Yumans by Kino), Kamia, Kavelchadon, Kiliwa, Maricopa, Mountain Pima, Opata, Quechan, Gila River Pima, Seri (Comcaac), Tohono O’odham, Sobaipuri, Yavapai, and the Yaqui (Yoeme).  In return, at the missions he founded, Father Kino shared European seeds like wheat and melons although watermelons already had found their way to the area. Pomegranates, peaches, apples, pears, figs, limes and grapes were another agricultural innovation he brought in.

Here and there if they have not been uprooted by modern builders as cities expanded, you can still find Sonoran pomegranate, peaches, quinces et al who are the offspring of those early plants.  The Sonoran pomegranates are white, an adaptive response to heat.  There are folks today, like Jesús Manuel García Yánez, who seek out these heritage plants, often taking a cutting and replanting what would essentially grow to be a clone of the original tree.

The missions and the tribal people who welcomed them did not have an easy time.  Sometimes they would be attacked not only by the Apaches but even by the same tribe from neighboring villages who rebelled against the Colonial Spanish practice of forced hard labor and slavery.  Pima Native Americans lived and worked at Caborca Mission and in the nearby village. When Pima rebels from Tubutuma village attacked the Caborca Mission, they killed Father Francisco Xavier Saeta in 1695 along with four other Native Americans who worked as servants at the mission.

The problem in Tubutuma stemmed from Colonial Spaniards bringing their Native American servants from other tribes when they moved to a new area.  In the Tubutuma Mission, an Opata servant was made the overseer of the village.  Opata and Pima tribes were long-time enemies.  This particular overseer, Antonio, was often cruel and his actions came to a head day one day when kicked the missions farm’s foreman nearly to death, spurs adding viciousness to the kicks to man’s ribs and flanks.  The foreman was Pima.  This happened during Easter Week, a time meant for peace and also five days before the same village tribesmen were to later attack and kill Father Saeta at Caborca.

The foreman cried for help, “Look my brothers; this Opata is killing me, protect me! Defend me!” to his Tubutuma village Pima members as they ran to see what was happening.  Outraged, they attacked Antonio, the Opata.  They shot arrows at Antonio, wounding him. He tried to escape on a horse but they caught and killed him.

The taste of violence created a mob.  They killed two more Opatas at Tubutuma, and began to burn and loot churches in nearby villages.  Many of these churches were housed in small adobe buildings. They skinned mission sheep, profaned vestal sacraments and killed more people, though not missionaries.   For whatever reason, most of the missionaries were not at their little churches except for Father Saeta.

Father Saeta died kneeling at the altar, bleeding out from 22 arrows, his fingers clasped around a special cross he had brought over from Spain.  He had felt a calling for foreign missionary work. He had written several letters to Father General Gonzales in 1691 begging to be sent to either Mexico or the Phillipines and was accepted in 1692 for Mexico.  He was still in theology studies and was ordained a priest after he arrived in Mexico City in December.  He finished his fourth and last year of theology study there. He then went to Puebla for his “third probation”, one more and the final year of study for Jesuits. In October of 1693, he traveled with Father Kino to Caboca, his first mission assignment. April 2, 1694, he was dead at 31.

Two months later, the Spanish soldiers arrived wanting retribution ofr Father Saeta’s death.  Just as in the past when Aztecs stole livestock and they punished Pimas for the Aztec crimes, they did not differentiate between the Pima people from different villages.  They further victimized the Pimas at Father Saeta’s Caborca Mission.  The soldiers cut down the wheat fields, letting their 300 horses feast on the stubble.  They destroyed the wheatfields, vegetable gardens, and orchards from the neighboring Mission villages.  The same ones that had already been burned and looted by the rebelling Pimas.  The soldiers rationalized if the Pimas were starving they would give up the rebels. They killed many innocent people. Most of the Pimas, even those that were not involved in the uprising, escaped to the hills, waiting for things to get sorted. Those who could not or did not flee were “interrogated”,  some killed in the process.  Father Kino recorded one woman being forcibly baptized and then flogged.

Father Kino went to bat for the Pimas, even the guilty ones.  He convinced the Jesuit General that it was a very small group of Pimas responsible and that they were repentant.  He fought not to close the missions despite the dangers, convinced they would prosper spiritually and economically.  If others had operated with as generous a heart, the uprising might never have happened.  Violence and cruelty had been met/created violence and cruelty with each side blaming the other.  His trust in sharing, love and giving helped to bring about a local peace, at least for a little while.

Father Kino passed away in 1711 due to a fever.

In 1767,  Jesuits are expelled from New Spain.  Franciscans came to New Mexico and moved into many of the Missions.  The first mission he founded San Bruno had to be abandoned after two years due to drought.

However many of his missions have survived although not with their original churches, of course.  The one in Tucson, built by mostly Tohono O’odham Nation folks, the San Xavier del Bac is the oldest European structure with much of the original interior. The first church that Kino put in the foundations for in 1700 was never finished. The actual first church was built in 1756.  Apaches destroyed the church in 1770. The second and present church was built in 1783 by the Franciscans. The Tohono O’odham Nation and Yaqui tribal still worship there.

In 1821, Mexico gained independence and soon after in 1828, the new government banned all Spanish-born priests.  By 1834, the last Franciscan had left San Xavier.  The local Native Americans continued to worship there but the church was basically abandoned by the Catholic Diocese of Sonora.  In 1854, with the Gadsden Purchase, the Territory of Arizona came under the United States.  That repositioned the Mission under the Santa Fe Diocese which reopened the church in 1859. In 1868, with the establishment of the Diocese of Tucson, the Mission started having regular services again.  Even the Sonoran Earthquake at 7.6 did not bring the Mission down, although it did do some damage.

While, he was not there to build the second church, Kino’s influence is still felt. While waiting on a boat to come to the Americas (Kino missed his boat and had to wait a year), Father Kino wrote a treatise on comets where he stated he dedicated his life to Our Lady of Guadalupe.  She has a place of honor in the Mission enshrined to the right of the main altar, an icon that binds his time to ours.

Note: Pima Indians/Native Americans are the O’odham people.  I used the out of date term because much of the material referred to them as Pima Indians.  As historically writers sometimes lumped tribes together incorrectly, I used the term Pima like the writers did in case the people involved were not O’odham.

Passage by land to California. Discovered by Father Eusebius Francis Kino, a Jesuit, between the years 1698 & 1701 containing likewise the New Missions of the Jesuits.
Universe of Maps – Opening the David Rumsey Map Center
Stanford Libraries

The Spanish among the Pimas: Part 2. The Killing of Saeta
Thirty letters in my name

Mission churches of the Sonoran Desert
Through Our Parents’ Eyes: History & Culture of Southern Arizona
University of Arizona

The Ragtag Daily Prompt now has it’s own blog site called the “Ragtag Community“. Each day of the week a prompt is presented by a different person. Today’s is “precedent” by sgeoil. Come and participate by posting writing or images evoked by the word and add your pingback or link to the comments there. Hope to see you at Ragtag Community!