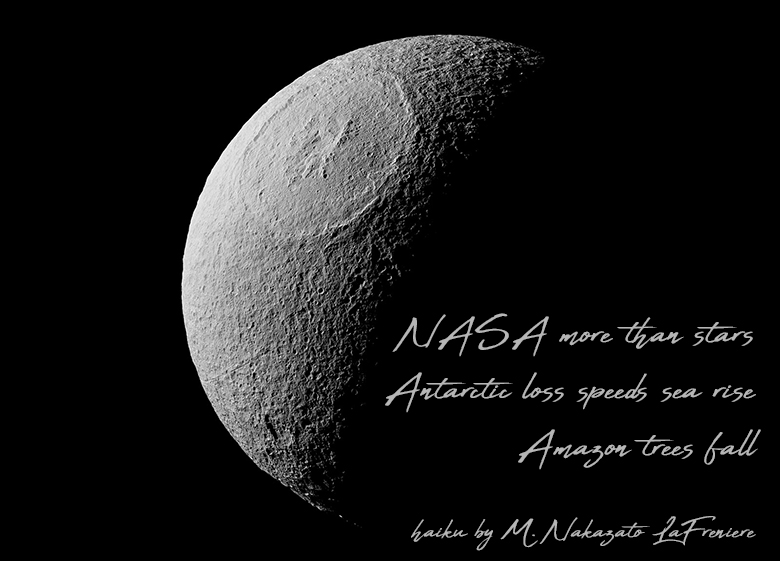 National Aeronautics and Space Administration (NASA) explores space, a stellar mission.  However, NASA studies much more than that.  They delve in earth research from an aerial or space view helping us to observe nature on our own planet.

“Flying over the Brazilian Amazon with an instrument firing 300,000 laser pulses per second, NASA scientists have made the first 3D measurements of forest canopies in the region. With this research they hope to shed light on the effects of prolonged drought on forest ecosystems and to provide a potential preview of stresses on rainforests in a warming world.
Credits: NASA’s Goddard Space Flight Center/Jefferson Beck” quoted from 3D View of Amazon Forests Captures Effects of El Niño Drought

As you can see from this list of today’s NASA headlines in order, while NASA is concerned primarily with space, they are looking at the earth too like the Antarctic and the Amazon.

Image of the Day : Bang and Whoosh! (Mars)

Tweets from NASA : Good night from the Space Station

Moon and Mars : New NASA Position to Focus on Exploration of Moon, Mars and Worlds Beyond

Amazon Affiliate disclosure: “We are a participant in the Amazon Services LLC Associates Program, an affiliate advertising program designed to provide a means for us to earn fees by linking to Amazon.com and affiliated sites.”

The Ragtag Daily Prompt now has it’s own blog site called the “Ragtag Community“. Each day of the week a prompt is presented by a different person. Today’s is “stellar” by sgeoil. Come and participate by posting writing or images evoked by the word and add your pingback or link to the comments there. Hope to see you at Ragtag Community!