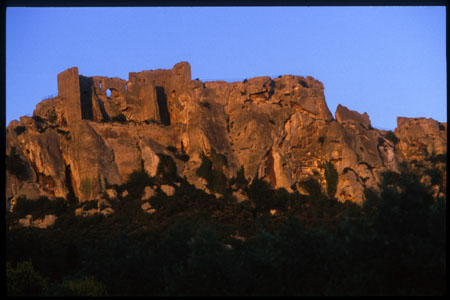 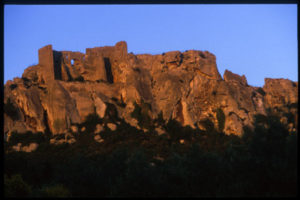 Rie and I drove by the chateau when we visited France decades ago. The bright afternoon light didn’t appeal to me and besides we were looking for a place to stay the night.  We spotted a B&B sign and pulled into the lot. Turns out the B&B was across the street from the sanitarium where they housed Van Gogh after he chopped off his ear and behind it were a few Roman remnants.  We were in the countryside just outside Arles. The owner chef made the most amazing bouillabaisse, a rich tomato seafood stew that I remember in my dreams.  Waking before Rie,  I drove back the way we came in the early morning to take this photo before returning in time for breakfast.  You think I’d miss breakfast?

The bastion Château des Baux-de-Provence was built high upon an escarpment. Wiki explains, “The natural defense provided by the escarpment, the raised and protected mountain valley that allowed them to have a protected food supply, and the natural ridge of the Alpilles that allowed them to control all the approaches to the citadel of Les Baux and the surrounding countryside, including the passage up and down the Rhone, and the approaches from the Mediterranean, made that the fortress impervious to the military technology of the time.”(1)

The known start of the The House of Baux began in 900 CE with Pons (Poncius) the Younger (de Jeune).  This was when the earliest texts associated with the Château first appeared.  At the time the bastion was known as Château Balcio. The family coat-of-arms features a comet and their motto ‘A l’asard Bautezar’, meaning ‘By the grace of Balthazar’.  The legend is that the family is descended from Balthazar, one of the three wise men who followed the star to Bethlehem.

Benedictine monk Bede (b.672-d.735), known also as the father of English History for authoring “Ecclesiastical History of the English People“, wrote in the 8th century that Balthazar was “black complexion, with [a] heavy beard” and carried myrrh. Magus Balthazar is also traditionally referred to as the King of Arabia and in the Western Christian church as Saint Balthazar.

Alix of Baux, the last of the Baux line, passed in 1426. Eventually by 1481, the domain reverted to the ownership of the King of France.  He ordered the fortress demolished because he disliked such a powerful bastion so far from his court and feared it would fall to this enemies.

The land was used by those in the King’s favor.  Constable Montmorency restored the ruined castle in the 1500s but then the religious wars came to the area.  Under the Manville family, the chateau became a center for Protestantism and regarded with suspicion by the king

In 1631, the king abolished the Parlaiment of Provence which resulted in his brother, Gaston of Orleans, revolting against the crown.  The Prince of Conde successfully ended the rebellion but Gaston and his cohorts retreated to the Chateau.   Richelieu ordered a seige on La Baux.  The rebels held out for 27 days before the fortress was breached.  Afterwards the walls were destroyed with gunpowder and pickaxes.

Louis XIII designated the La Bauxfiefdom a marquisate and gave it to Ercole Grimaldi for ridding Monaco of Spaniards.  To this day, his descendents pass down the title of Marquis of Baux with the current title holder being Prince Albert of Monaco, the son of Grace Kelly and Prince Rainier III.

In the 1990s, the Chateau began a new renaissance as a tourist destination beginning with the opening of the famed restaurant ‘L’Oustau de Baumanière’ by Raymond Thuillier in 1945. In 2007, the reconstructed the seige weapons (the trebuchet, bricole and couillard) and began daily demonstrations.

©M. LaFreniere, all rights reserved for poetry and photographs.  Copyright of the painting is listed on WikiMedia Commons.

The Château from yesterday to today
Château des Baux-de-Provence

Painting : Adoration of the Kings, circa 1500s, created in the workshop of Jan Gossaert (1478-1532), via WikiMedia Commons.  Currently at the National Gallery, London, England on loan from a private collection.

RDP #11 – BASTION
Ragtag Daily Prompt
Sundays by Martha from I’m a Writer, Yes I am!
on Ragtag Community

The Ragtag Daily Prompt now has it’s own blog site called the “Ragtag Community“.  Each day of the week a prompt is presented by a different person.  Today’s is “bastion” by Martha of I’m a Writer, Yes I am!  Come and participate by posting writing or images evoked by the word and add your pingback or link to the comments there.  Hope to see you at Ragtag Community!