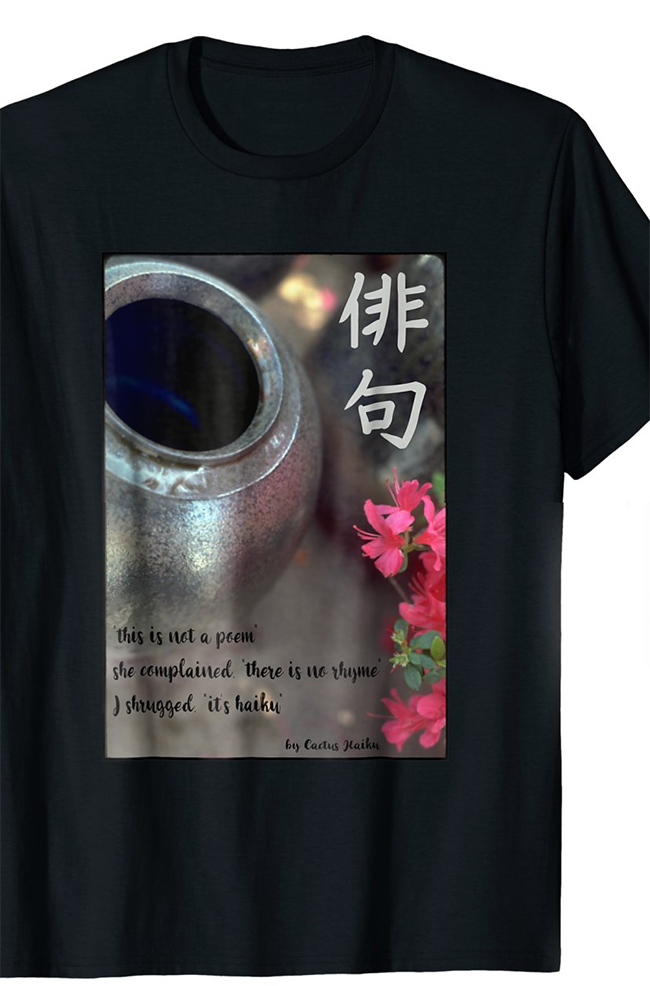 oh, I feel giddy
someone unknown bought a shirt
does a happy dance

Yay! Someone bought a shirt I designed.  And it was a haiku shirt! Plus I used one of my pictures from Japan. It’s my first stranger sale!  I am so happy.  Surprised too.

Here is my baby.  And whoever you are out there who bought it, thank you!

As some of you know I’ve posted designs to be sold on Merch Amazon T-shirts and on Zazzle (t-shirts, mugs, cards, aprons).  With a POD, you upload the design and they manufacture the item when someone orders it, collect the money,  ships it to them and gives you a commission.  With some like Zazzle, you can have worldwide sales because they manufacture in different countries.

Generally POD sites don’t give samples so I’ve bought a few to see how they will look.  Carol bought a couple shirts but she doesn’t count because she is my bestfriend.  I was doing a design a day but fell off the wagon when I did a site redesign as I have to create a page for each thing I’ve already designed. I did finish the t-shirt page though a month ago? If you want to see the other t-shirts (there are only a few), visit Cactus Dreams T-shirt page.

For weeks I checked daily and no one bought anything: not a card, a shirt or anything.  Then of course for whatever reason, I haven’t checked for the last two weeks and guess what?  Now I sold one.  It’s like the saying, “A watched pot never boils” and then Murphy’s Law, when something else grabs your attention, the darn pot boils over the minute your back is turned.  Which is awesome!  Ok, I only get $3.87 which is not a lot of kibble but I totally understand why people frame that first dollar.  It’s a symbol.

Designing stuff, drawing, photographing, writing poetry — these are the things I’ve wanted to do since I was a teenager.  Between my own fears and my working-class parents and most of my friends seeing those things as hobbies, as things to fit around the edges of your life, I worked a variety of jobs from a postal clerk (no, I’m not crazy, ha ha ha and I missed the day at work when someone came in waving a gun) to teaching English in Japan, clerking in a library to being the office support staff on an academic research project and a bunch of others. I especially loved living in Japan  and working in Oakland libraries.

I did try being an artist for awhile but I’m really bad at selling myself — I’m good at bragging about other people and other people’s projects but it is harder for me to do that about myself in person.  And most of the successful artists I knew were creative artists but also could either promote themselves or had someone else (usually girlfriend or husband/wife) who was willing to promote them endlessly.  Honestly I’ve known some very creative great artists who hardly sell anything because it is difficult for them to promote themselves.  I remember one girlfriend Janet whose photographs were amazing.  And yet she would spend her time promoting her boyfriend’s photographs instead of hers.  His photographs were excellent travel photographs but didn’t have her creativity and specialness. Rolls my eyes (and yeah, when we did Open Studios as a group, I was much more likely to promote hers than my own photographs so it is the kettle calling the pot black, sighs).

So out comes POD — Purchase on Demand.  You upload the design and it gets sold on various sites like Merch Amazon (only t-shirts) and Zazzle ( lots of stuff).  You get a percentage.  You still have to promote — and I admit that is the piece I haven’t learned.

I have tried Facebook advertising, mostly because they gave me a $30 certificate to try it out.  It was interesting.  For $5, they guarantee 100 or so people will see it.   I tried it but none of the 100 bought one although 5 did go take a look.  I still think that’s pretty good. I did have to design an ad but I didn’t have to go out and gladhand 100 people so it’s a major plus.

The thing with Zazzle, if after you load up a design, you have 0 hits, it doesn’t show on their search engine.  This way the 0 hits doesn’t bring down their aggregate numbers.  But it makes it hard for new people because a new person doesn’t get many or even 0 hits in the beginning so you need to bring people into the POD site.  Actual buys helps even more. Amazon is similar in that their search results with the bestselling at the top so someone who hasn’t sold anything is way way at the bottom — which since a gazillion people sell on Amazon means you won’t be on the first couple of hundred pages of the search results.  With both sites, the bestselling people are at the top which of course means they sell more and it’s a cycle.  Which is why I’m surprised someone even found my shirt to buy it.  I wonder how they found it?  Don’t care.  Does a giddy tap dance.

There is another problem with both sites and most other POD sites in that they show other bestselling people’s stuff on the page with whatever you designed — so there is a pull away from your designs. Also they push their brand so all the packaging, invoice and everything arrives with their logo.  Most customers become loyal to the POD site rather than to you.  That is why it is important to build a store with your own things outside the POD sites so they can see your collection.

Still I think this system works for me because it’s ok that I’m shyer in person.  i admit I don’t think I am the most creative person.  I know people who I think are way more creative than me.  Still I love doing poetry, photography and creating things and it would be awesome if it paid for food, the bills and travel (I still want to go on a roadtrip with Pinkie and Midnight. I just haven’t figured out how. Maybe a truck or an RV?) However, consistency in production is important so I need to start putting up more designs again and finish putting up the designs I’ve already done on the redesigned store website.  It’s more work than a regular job to do your own thing timewise.  But for today, no work.  Let’s just celebrate.

(Natalie sings “I feel giddy, I feel sunny, I feel fizzy and funny and fine”.  The line was supposed to be “I feel dizzy” after the committe should honor her but I like “giddy” much better)

Cactus Dreams T-shirts : note, since I’m a POD seller, clicking on a t-shirt will take you either to Amazon or Zazzle who does the manufacturing for me.  I don’t manufacture my own.

As the designer and affiliate, I’ll get a commission if you click the link and buy something on either Amazon or Zazzle whichever you visit from the link.  Amazon disclosure: “We are a participant in the Amazon Services LLC Associates Program, an affiliate advertising program designed to provide a means for us to earn fees by linking to Amazon.com and affiliated sites.”