It’s over. The flower has closed back up for the next few years, maybe a decade. It was open yesterday around noon and already closed so didn’t even last 48 hours.

In the morning, an expert placed pollen from Chicago’s corpse flowers Sunshine and Sumatra deep within the purple flower. If they take, there will be babies!

corm (definition): a rounded underground storage organ present in plants, consisting of a swollen stem base covered with scale leaves.
from wiki (incl the pic):

After the flower dies back, a single leaf, which reaches the size of a small tree, grows from the underground corm. The leaf grows on a somewhat green stalk that branches into three sections at the top, each containing many leaflets. The leaf structure can reach up to 6 metres (20 ft) tall and 5 metres (16 ft) across. Each year, the old leaf dies and a new one grows in its place. When the corm has stored enough energy, it becomes dormant for about four months. Then, the process repeats. 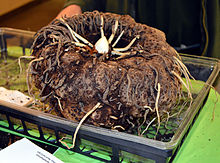 The corm is the largest known, typically weighing around 50 kilograms (110 lb).[3] When a specimen at the Princess of Wales Conservatory, Kew Gardens, was repotted after its dormant period, the weight was recorded as 91 kilograms (201 lb).[4] In 2006, a corm in the Botanical Garden of Bonn, Germany was recorded at 117 kilograms (258 lb),[5] and an A. titanum grown in Gilford, New Hampshire by Dr. Louis Ricciardiello in 2010 weighed 305 lbs (138.6  kg).[6][7] However the current record is held by a corm grown at the Royal Botanic Garden Edinburgh, weighing 153.9 kg after 7 years growth from an initial corm the size of an orange.[8]

Ok, that’s it for another ten years before I write about this flower again.