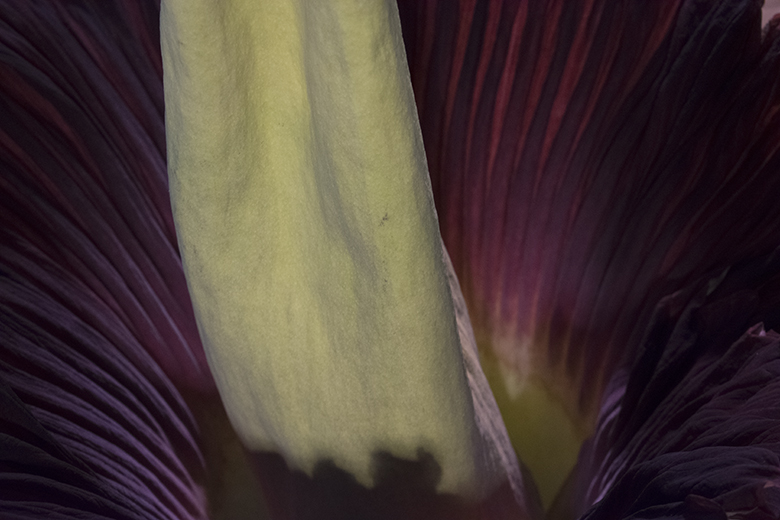 I stood in line for more than an hour to enter the butterfly room which housed the corpse flower.

The smell wasn’t that bad.  I’ve smelt worse driving on the highway passed farmlands graced with fresh manure.  In fact it smelled like manure to me — maybe a few days old, not quite fresh, so the edge was off.  The smell attracts insects and flies to carry the pollen from plant to plant and to drop it low enough into the female flower parts.

I was trying to take a photo of the inside because they said the female flower parts were down there in the center.  I wasn’t tall enough plus I couldn’t get near enough.  I asked a tall guy but he pretty much got the same pics I did. They had yellow tape around the flower — I’m not sure if it was not to block the live feed or to keep the flower by being traumatized by too many visitors too close. Probably the live feed as the yellow tape didn’t go all the way around.  I didn’t realize until I moved to the other side that there was no yellow tape there.

I’ll resize all my photos and throw them up tomorrow (Tuesday) on Cactus Catz in case anyone is interested.  It’ll flower for about 24-48 hours and then it won’t bloom again for another somewhere between two to ten years, depends on the flower.

The live feed at Tucson Botanical Garden is still going on.