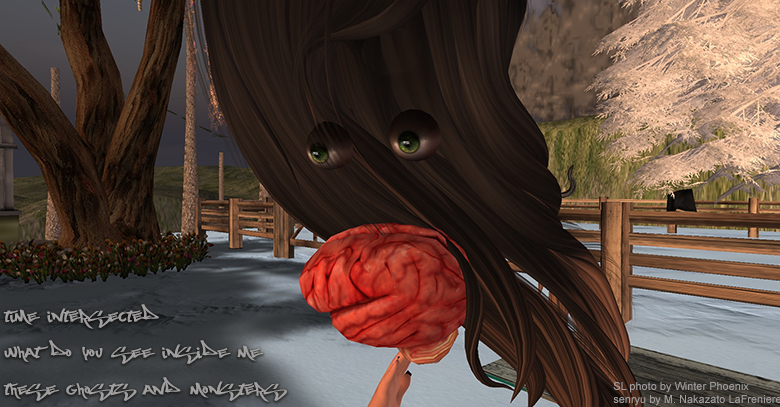 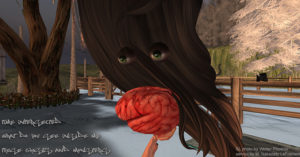 In Second Life, when you teleport somewhere, it’s not like Star Trek.  You don’t arrive all at once.  Sometimes your body arrives before your clothes and you’re naked.  Sometimes the inside of your head arrives before your face and you’re a monster.  And it’s really bad if someone has a slow computer.  Don’t ask me why but Winter loves to take pics of me as I rezz in pieces.

It must be a guy thing.  None of my women friends do that.  We wait until we are all in one piece before taking pics of each other.  Well, maybe not Amber.  She likes taking pics of people before they are completely rezzed but Jhan or Eleanor would never do that. It’s SL version of bathroom humor/prank humor.

And here you thought we looked perfect all the time in SL.  hah.

I like this one though.  My hand rezzed but not the rest of my body.  The hair and eyes rezzing first looks like a Japanese yokai ghost.  It’s almost like someone is offering a brain to the ghost to eat.  Might make for a good Halloween haiku picture.

And did Winter get pics of me rezzing in naked before my clothes arrive? He’s got a few of those and no, you’re not going to see them.  I’ve already given him an earful everytime he does it — no way I’d share them.

Can’t a guy give a woman a few minutes to get herself together? Or at least teleported in. Why didn’t they ever have these problems in Star Trek?  People always arrived with their clothes and face first. That’s how you know Star Trek is not real.

FYI: There used to be Star Trek sims (environmental builds) on SL until Paramount insisted SL shut them down for copyright infringement a few years back.  Let them exist for a decade and suddenly it wasn’t ok when the movies started becoming more popular.  Go figure.  Made a lot of Star Trek fans mad at Paramount but they don’t care.  They know the fans will buy the movies anyways. There are a lot of fan role-play environments here.  One day I will have to try out a role-play.  I’ve got the clothes for it but never did them.  I’m more into the photo creation aspect and land/interior decorating.

P.S. Missed posting a poem yesterday due to an overlong nap so my one year starts over again today.  Gazing mournfully into my cup of tea.  What? it doesn’t have the same oomph as whiskey?  Sorry about that.  Whiskey and laundry do not mix.  Ok. I’m laughing again.  It’s just one of those days.

Tuesday Platform: T.S. Elliot’s Four Quartets (if you have few minutes, go listen to Elliot read his quartets, they are amazing.)
imaginary garden with real toads