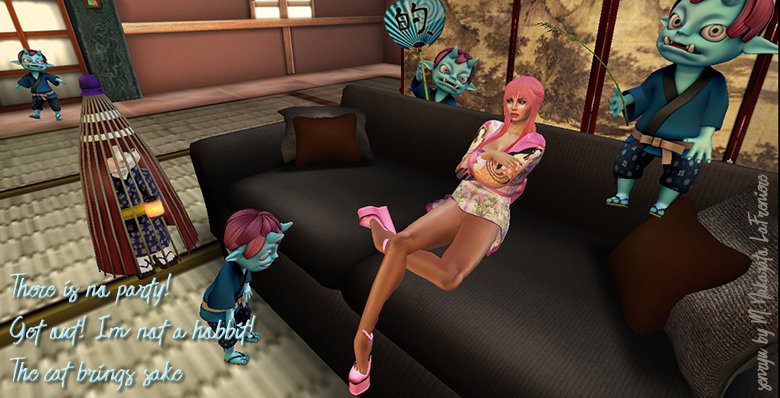 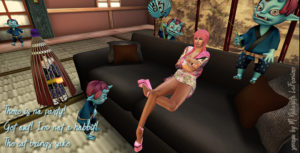 There is no party!
Get out! I’m not a hobbit!
The cat brings sake

There was a knock on the door. Surprised someone had found their way to the chalet, I answered. A little girl beneath a Japanese wooden umbrella stood there holding a lantern against the night.

Huh? I recognized her type having visited the land of the Rising Sun. She was a kasa obake, a kind of ghost which I always thought were actually a kind of night fae. Although usually the Karakasa did not appear quite as human as her, looking more like one-eyed umbrellas hoping around on one leg on a geta. Legend had it they were the animated spirits of normal umbrellas that had reached 100 years old. I’d only ever seen them in their native habitat, Japan, but maybe she escaped an antique shop. Pretty harmless, her kind never hurt humans despite video game lore.

“I heard there was a party here?” She queried.

She stood there patiently. It felt rude to close the door on her. I didn’t feel quite right inviting a spirit into Winter’s chalet. Still, I admit I was curious as to how she was so far from home.

“Thank you.” She stepped diffidently in.

I had just closed the door when there was a sharp rap on the door.

“Oh, that must be my friend. I told him about the party.”

“But there is no party!” I insisted, opening the door.

A little blue oni stood there chewing on a stalk of grass. Without waiting for an invite, he walked in.

“Where is everyone?” he looked around, his expression a tad disappointed.

“There is no…” another tap on the door

“That’s probably my brother,” he said,swinging the door open.

“Hey!” another imp danced in. “Don’t bother closing the door. Fanboy is right behind me!”

Sure enough, another demon leapt through the door. I grabbed for the doorknob when another of their quartet slipped in.

“Look! There is no party!” I sulked on the sofa. “You need to all leave before Winter gets here! And you! Stop looking up my dress!”

“Awww, you’re stressed out!” Fanboy started waving the fan in my direction, sending a rush of coolness

The littlest imp ran to the door, “I’ll get it! You don’t have to get up!”

And two more came in. One carried wooden steaming containers of omochi.

“Yay, the food has arrived! We need some drink!” Grass guy pulled out a bottle of sake. “I don’t think this’ll be enough,” he said mournfully.

A fat cat rolled in followed by a tiny little elephant. The cat hefted a barrel of sake, “Sorry, I’m late,” he slurred. Then fell over onto the cushion, already drunk, and began snoring.

“Wait a minute,” I yelled! “You’ve got the story all wrong! You’re not dwarves and I’m not a hobbit! There is no party!”

“She must be high,” said Fanboy. “Whoever heard of a hobbit leaving England.”

And just then, Winter came home!

————— So ends another cracked tale

The hobbit by J. R. Tolkien

Amazon. These are illustrated books so not available in kindle.

I’m an Amazon affiliate. Last month I got my third “buy” for a 90 cents commisson. So I’ve earned a grand total of $7.31 in 6 months. I like looking up cool books I want to have or already own.  Today I listed the Yokai Ukiyoe book that looks fabulous and I’d love to have it.  I’ll usually get a percentage if someone buys something by clicking a link — for books it’s 4.5%. Amazon disclosure: “We are a participant in the Amazon Services LLC Associates Program, an affiliate advertising program designed to provide a means for us to earn fees by linking to Amazon.com and affiliated sites.”