inscrutable word
prompt says write a Cherita
what the heck is that?
sounds like a cigar or drink
poem form evolved from tanka

once upon a time, or so the story goes
Leiana, a royal guard of the deep, doing a usual patrol
saw movement deep within a cave

of course, she had to investigate
a large pile of bones had grown out of the blue

Chèvrefeuille gave us a challenge to write out of the box with a Cherita.  Never heard of it.  I thought it sounded like a cigar or a drink, maybe a cherry margarita.  Luckily, he explains that it is a Malay poetry form that evolved out of haiku and tanka.  The structure was 3 stanzas telling a story.  First stanza is one line, 2nd is 2 lines and the final is, you guessed it, 3 lines.

Chèvrefeuille quotes: “The cherita arose out of the English-language haiku and tanka tradition, but is more anecdotal, or nano-narrative, in nature than are the “momentary” haiku and the more lyrical tanka, though it is easily adaptable to lyrical expression. It is imagistic and depends on conciseness and suggestion for its effect.”

The interesting thing about that quote is that it shows on Poet’s Collective as coming from Wikipedia but is no longer there.  Wikipedia deleted their Cherita entry because apparently somebody thought it was a made-up poetry form used by one person and hadn’t done the research to find out it has rippled out and now you can find it on a number of different poetry sites and blogs. In the 20 years since it was invented in 1997 by Ai-li to honor her grandparents, it has become a poetic form used by many, although the primary writers are often haiku and tanka folks.

Still before I wrote one, I had another question.  Is there a syllable count?  So the Poet’s Collective explained Cherita a little further. There is no title.  No restrictions on syllable counts or line lengths.   Interestingly enough it can be written either solo or with 3 partners so I bet each partner takes on one stanza.

The no-title rule is explained by Ai li, “…they [titles] defeat the whole point of the cherita which is to lead you into a story or tale. A title tells you upfront what the rest of the 6 lines is all about. What would the point of writing a cherita be then?”

Given the imagistic, anecdotal nature of a Cherita, I think it evolved out of a haibun.  Once I realized that, I realized I am going to love this form.  I have a feeling that.  Now there is also a Cherita Terbalik which is an inverted Cherita so instead of 1 – 2 – 3, you get a 3 – 2 – 1 form.  So three lines in the first, two lines in the second, and one line in the third.

Like a haibun, the narratives are based on real life, not fiction.  The Cherita site quotes Ai li, the form’s inventor: “Storytelling is an age-old tradition as we all know. Our ancestors shared their stories over warming fires in smoke filled caves. Cave drawings were left by early man for us to remember. Many other tales were also passed down as bedtime stories, an oral tradition that still exists today in many parts of the world.”

The Atlas Poetica: a tanka journal did a special issue on cherita.  If you’d like to see cheritas curated by Ai li from writers around the world, visit 25 cheritas

Traditionally haiku, tanka, and haibun as well as the new cherita forms are nonfiction based in reality.  However, I’ve started writing haiku stories that are fictional.  So my cherita is fantasy fiction.  And I used the Cherita Terbalik form, the inverted cherita.  Can’t wait to see one of your Cheritas!

And for fun because some people like to know about images:

My original photo in Second Life, avatar Kayla Woodrunner, looked like this: 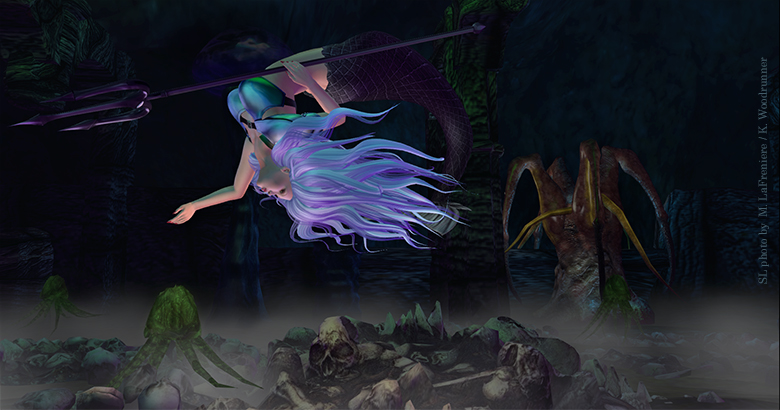 For those who are into the One Word Photo Challenge, this week is mermaid and the above photo is for that challenge.  However I decided to use Photoshop to make some artistic enhancements for my cherita story.  To that end, I went to Debbie Scott’s Friday Freebie and used that in two layers

One FriFreebie layer I had blend mode Soft Light 40% above my picture (it brightened the background revealing more depth to the cavern). then above that I had another FriFreebie layer at blend mode Overlay 70% which resulted in the image for the Cherita poem.