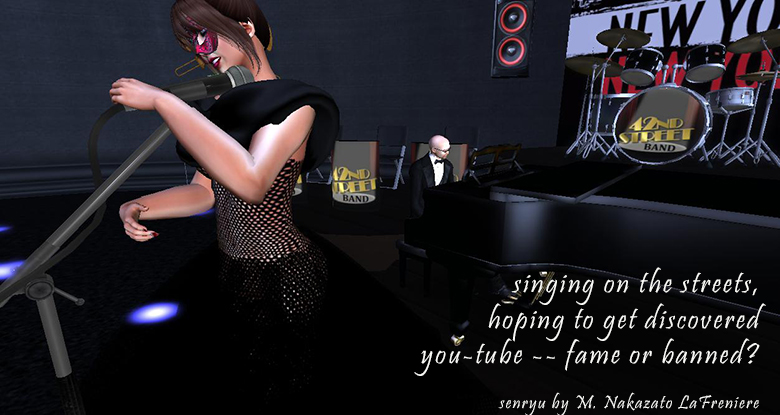 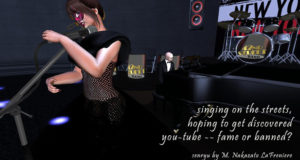 singing on the streets,
hoping to get discovered
you-tube — fame or banned?

Once upon a time people hoped a record producer would show up at their gig.  Nowadays people hope a video will go viral and get noticed. You-tube has become an avenue for newbies to put out their debuts and keep on trucking, hoping to build an audience, make a living, become famous. Does it happen?  Sure. But it’s risky. You could get banned.

Justin Bieber put up his first video when he was just 12. January 2007 he uploaded So Sick by Ne-yo. That year he uploaded 10 videos, roughly one a month. By March 2008, he was noticed by Usher and Usher appeared in a Bieber video.  Usher subsequently signed him to Island Def Jam Recordings despite an attempt by Justin Timberlake to win Bieber over to his label. Justin’s first video:

Walk the Earth posted their own original songs on You-tube as well as covers of other folks figuring it was easier than crisscrossing Canada trying to build a fanbase. When they did the cover of Goyte’s “Somebody I used to know”, they were hoping for 50,000 views but it went viral.  When the video hit 50 million views in its first month,  it spotlighted Goyte’s talents to U.S.A. listeners, bringing him another market as well as winning the Walk the Earth a record deal. Their video posted January 6, 2012

If you do a cover of another person’s song and you don’t have a synchronicity license (which most people don’t), the record label decides whether to say yay or nay.  Problem is you don’t know until you do it — there is no master list saying which songs are ok and which aren’t. If it’s nay,you have to take down the video and you get a strike from You-tube.  Three strikes and You-tube takes your channel down down automatically and permanently, no matter how many songs you have up or how many viewers.   If it’s yay, the record company gets a cut of the revenue. You-tube automatically gets 50% of the revenue and if you post your own music, you get 50% and if not, the company can getup to 50%.  In this case, Columbia went for 35% of the revenue, leaving the band with 15% of the revenue.  Their best month, it is estimated the band received $30,000 for their cover of Goyte plus Columbia offered them a record deal.  Take a chance, get banned or win big exposure.  Spin the wheel.

That’s the problem with covering other people’s songs.  If you are making a recording, there is no problem. Due to prior copyright laws, there is a system in place that you pay a preset amount depending on how many CDs or whatever you are making for about 8 cents a song per CD if it’s under 5 minutes and as long as you buy the license, you can play the song.

But if you are making a video, it’s a no-man’s land and you have to hope the person/company who holds the rights prefers to getting you-tube advertising revenue to removing the video. There is no set fee and the copyright holder decides if you can even make the video.  On you-tube, you-tube automatically takes 50% of ad revenue and publishers/record companies can take up to 50% of the rest, that would leave 0% for the videomaker. And some companies currently do take all 50% if they want or they can deny the song, earning the videomaker a strike.  You-tube pays 25 cents per 100 views and you have to reach 1,000 subscribers plus within 12 months have 4,000 watch hours before You-tube allows you to be in their ad revenue program. Three strikes of having a company say remove the video and the person is out: their account is closed and their videos are banned. Meantime You-tube has reached an agreement with some companies on revenue sharing but they will not publicize which companies so people can determine which songs might be safer to perform.

Bryan Andres, a Filipino-American violin street performer, decided to give Seattle a chance after playing around Alaska. A passer-by loved what he was doing and posted a video on you-tube that went viral and is up to 5 million hits

He’s gotten some notice but hasn’t cracked the big time yet.  Since someone else posted the viral video, Andres does not get a cut for his performance. I don’t know if the person who published the video gets any money as that info has not been published. Andres does have his own channel with his most popular video not quite hitting one million.

People posting videos on Facebook have the same problem except there is no revenue stream potential for publishers so my guess is you are more likely to have to remove the video and get your account closed for a few days or permanently. Videos garner increased publicity for a song but no revenue. Andres had his Facebook account closed without warning for 3 days because a video of his performance was posted to his facebook account.  There was no warning, no request to take down the video.  The account was suddenly just closed. If you post a video, you just have to hope copyright holders like the publicity for the song.

Similarly, people have been making videos for you-tube without the synchronicity license but it is rolling the dice and I don’t know if you have noticed but lately my playlists have suddenly had songs being taken off — which might mean that record companies are more and more deciding to say no. Or it could be someone had their account banned so all their videos were taken off, including the ones that were fine before. Could be worse.  A proposed Commercial Felony Streaming Act in 2011 would have punished videomakers for up to 5 years for doing copyrighted materials — with a system that currently has no way of identifying which songs copyright holders allow videos for and which don’t until after the video is posted.  The bill defined streaming as being streamed 10 times within 180 days – which on youtube is practically every video even the ones done at a homeparty viewed only by family members. The bill wasn’t voted upon and died after a public furor but it doesn’t mean that someone won’t try to put something through at a later date as there still are no protections for singers, musicians or videomakers. You can post 100 songs and 97 might be fine and number 100 gets your account closed, your performance banned and possibly jail (if future bills criminalize it). How crazy is that? When you speed at least there are signs saying 65mph.  You don’t have to guess at the speed limit and hope you are going under.

The U.S. lawmakers need to pass a law like they did for recordings — not criminalize videos but make it relatively easy and affordable for people to get a license to make a video.  For recordings, there are a few agencies like the Harry Fox Agency that people can receive a mechanical license after paying a set fee.  In 1909, lawmakers made this mechanical license compulsory so that copyright holders couldn’t arbitrarily withhold the right to perform a song once the song had already been recorded.

At minimum, songs should be placed on a list which songs can be videotaped and which can’t  and a maximum percent of revenue the copyright holders can demand.  Because it is impossible to gauge how many people might view something as a video going viral is unpredictable and some ways of releasing a video has no income stream, a percentage seems a fair way to go.  Otherwise it is like criminalizing people for singing at a party.  Plus I think before anyone gets punished, a civil request to take down a video should be the standard first step with no punishment (no strikes, no closing of accounts, no banning performers for any amount of time) if you do so within a predetermined set amount of time. That has problems too because not all people log into social accounts everyday.

I am not a singer (I’ve been told I sound like a sick cow when I sing) but criminalizing or punishing some people and letting other people get a pass for the same behavior when there is no way to determine which songs are okay to tape is nutty.  While copyright holders of songs/music should be protected, so should the right of artistic expression of singers/musicians/filmmakers. There needs to be some sort of balance instead of this weird arbitrariness.  Somewhere out there a 12-year old kid just like Justin had his singing banned for 3 strikes while another one is still singing — and it was just luck of the draw.

Pop Star Justin Bieber Is on the Brink of Superstardom
By Desiree Adib, ABC News, Nov. 14, 2009

The Right to Copy: Cover Songs and Copyright on YouTube (Presentation)
Kurt Trowbridge

The Right to Copy: Cover Songs and Copyright on YouTube
Kurt Trowbridge