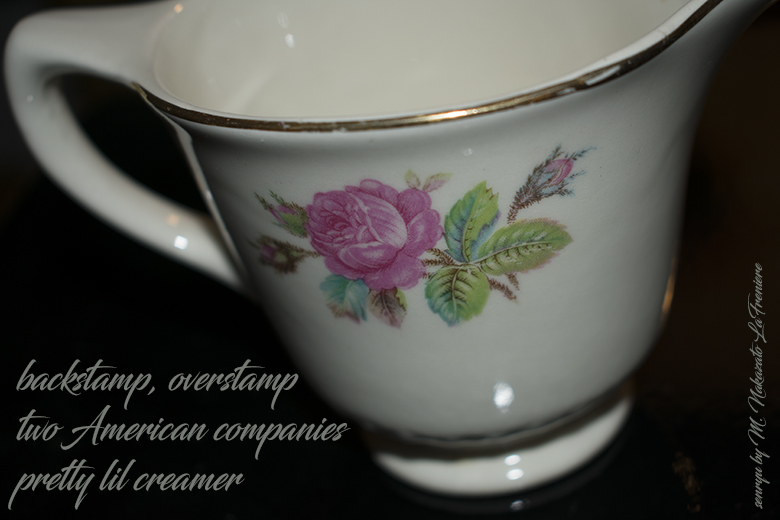 Another thrift store find.  This time a vintage creamer.  The backstamp is interesting to me as it shows two companies.  The top one is Cunningham & Pickett, Inc. of Alliance, Ohio

Cunningham & Pickett was a distributor so they would put their stamp over the manufacturer that the wares came from, usually Homer Laughlin.  They were distributed between the 1930s to 1960s* so the stamp nicely narrows the window of a vintage dinnerware. Alliance, Ohio had a series of distributors that engaged in this practice. The understamp is the manufacturer which in this case was Homer Laughlin.  You can see the stamp in green under the black overstamp.  The Calirose pattern uses the Liberty pattern in the Homer Laughlin line.  The Liberty pattern is the shape rather than the decoration.  Decorations in that line varied from American to flowers.  The Calirose is the single rose pattern in the Liberty line and was manufactured from 1942 into the 1950s.

The Homer Laughlin stamp has a series of lettters and numbers under the “made in USA” which tell the year and month it was made.  Unfortunately it is difficult to read due to the back stamp but I think I see H4?N.  H is the 8th month so that is August.  4? is the year but I can’t read the second number.  It was made in the 1940s.  The N is for the Newell plant.

Homer & Laughlin started off as Laughlin Pottery  founded by two brothers in 1871 in East Liverpool, Ohio. At the 1876 Philadelphia Centennial Exposition, they were awarded the best white-ware. Shakespeare left in 1879, leaving the company to his brother Homer.  Homer ran it on his own for awhile until William Wells joined him in 1889.  In 1897, Homer sold his interest to Wells and left.  Although both Laughlin brothers were gone, the company kept the name.

They expanded rapidly, adding plants and kilns until they had 3 plants with 32 kilns in East Liverpool  It wasn’t enough.  Along with investors, they bought land across the river to build a new factory.  The investors developed a town called Newhall on that West Virginia land, put in public utilities and ran a streetcar between East Liverpool and the new town.  In 1903, the company opened up a factory in West Virginia. A fifth plant with 78 kilns was added in 1914.

An innovative continuous kiln was invented for plant 6 working with engineers, scientists and potters in 1923.    This design drew worldwide attention and increased their output tremendously. By 1929, they had built two more plants with the new continuous kiln and closed the original factories in Ohio.   Their most productive year 1948, they produced more than 10 million pieces. Still the largest American potterymaker , they still manufacture their popular 1930s Fiestaline to this day as well as other lines and custom orders with designs by the customer.  If you collect American vintageware, you are likely to have Homer Laughlin.

The HLC family of companies