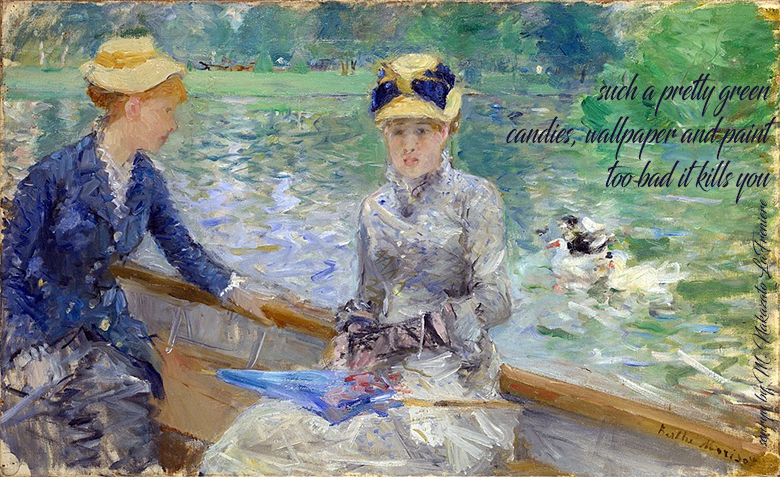 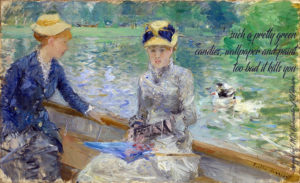 such a pretty green
candies, wallpaper and paint
too bad it kills you

Arsenic in history and art

Arsenic is everywhere: in the air, in the soil, in water and food.  You have arsenic in your body.  It’s a fact of life.  However, arsenic in certain forms and above a certain quantity kills.  So arsenic giving a brilliant emerald hue in a wallpaper won’t kill.  But mix that wallpaper

with a damp British climate and add the ensuing growth of fungus, this combination results in the arsenic  expelled as a poisonous arsine gas killing the inhabits or if the inhabitants survived, inducing or contributing to cancer and other diseases.

Napoleon, in exile, demanded the house be papered in his favorite color, green.  Later he died of stomach cancer.  Recently arsenic was found increase the risk of gastic carcinoma.  Coupled withe findings that Napoleon’s hair had significant amounts of arsenic, historians now widely believed his wallpaper contributed to his death.

Arsenic imparts such a pretty emerald hue to paints that painters loved it.  First the pigment Scheele’s Green became popular and then later Paris Green because it lasted longer. Among many others, Van Gogh, Monet, Gauguin, Renoir, Cezanne and Picasso used Paris Green pigment also known as Emerald Green, Veronese green, Schweinfurt green, Mitis green, Vienna green, and Imperial green. Paris Green may have caused or contributed to Monet’s blindness and Cezanne’s diabetes.   It was so common that even today if you buy odd lots of oil paints at ebay and estate sales, you might find used green paint tubes containing arsenic.

Decorators, craftsmen, manufacturers and wallpaperers refused to believe in the “Arsenic Scare”. Some would  even lick the wallpaper to prove to their patrons it was perfectly safe.  William Morris, who designed a wallpaper using Scheele’s Green, complained, “it is hardly possible to imagine….a greater folly…than the arsenic scare.”

Arsenic was thought so safe that white arsenic powder, chalk and vinegar mixed together were drank by Victorian women hoping to whiten their complexions.  Women also rubbed the arsenic into their face.  Arsenic was even used to dye dresses green.  No wonder so many women were prone to fainting at the drop of a hat.

But the times, they were achanging.  In 1858, there was a huge scandal in Bradford, England, when a man selling sweets accidentally poisoned more than 200 people.   Back in the day, sugar was expensive so they would cut the sugar in candy with other powders like powdered gypsum.  William Hardaker bought his candies from Joseph Neal who manufactured the sweets and saved money by cutting the sugar.  Joseph Neal, in turn, bought his gypsum aka “daff” from a pharmacist Charles Hodgson.  Unfortunately one day Hodson was sick and his assistant William Goddard told Neal the daff was in the attic but Neal fetched the wrong cask.  The assistant didn’t catch the error and sold him arsenic trioxide.

Neal’s hired sweetmaker James Appleton fell ill after making the sweets with the arsenic but did not associate it with the candies.  Appleton did notice the sweets looked different than usual.  Hardaker also noticed the sweets looked different when he picked his order up and received a subsequent discount. He sold 5 pounds of the sweet from his stall that night but due to sampling his own merchandise, he fell ill.  Within a day, 21 were day and more than 200 were ill.

William Goddard, Charles Hodgson, Joseph Neal and William Hardaker were all tried for manslaughter.  Goodard was found guilty, then acquitted. The charges against the others were withdrawn.  However, the scandal resulted in the Pharmacy Act of 1868. To this day, the chemist and druggist is responsible for obtaining the signature of the purchaser for nonmedicinal poisons.

In the 1960’s many countries banned the manufacture of Paris Green.

You can use the Amazon search bar to do any search at Amazon as I did with “arsenic history”.

While I am an affiliate for Amazon, the prices remain the same. Amazon disclosure: “We are a participant in the Amazon Services LLC Associates Program, an affiliate advertising program designed to provide a means for us to earn fees by linking to Amazon.com and affiliated sites.”