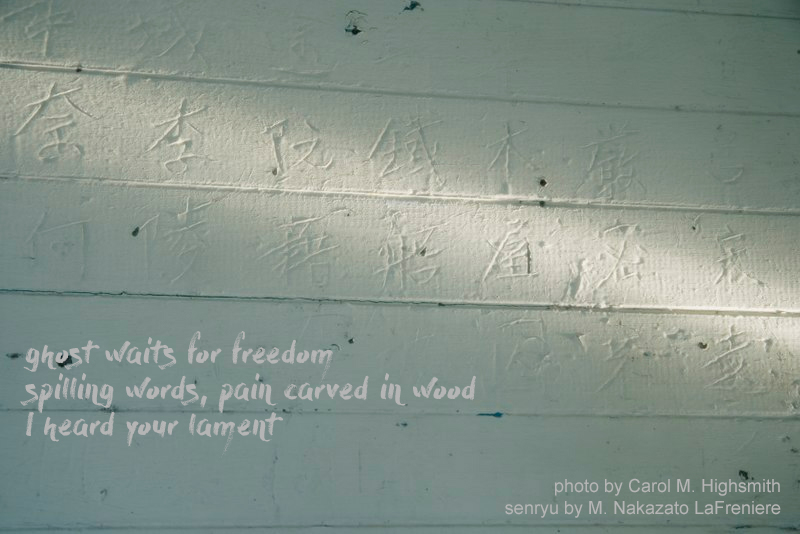 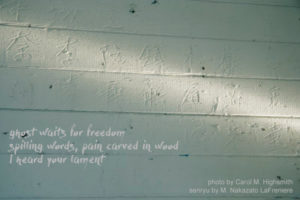 A response poem responds to another poem.  This senryu is in response to the following poem carved on the barracks wall at Angel Island.

Angel Island rests within the San Francisco Bay and once immigrants coming into San Francisco were sent there.  From 1910-1940, Angel Island was seen as the “Guardian of the Western Gate” and unlike it’s counterpart Ellis Island on the east coast, officials saw it as their duty to block Asians from immigrating, especially the Chinese. The Chinese Exclusion Act initially enacted for 10 years was extended until 1943. Many Chinese were kept on Angel Island, while officials quizzed them to determine their eligibility and the correctness of their papers. In these interrogations, the officials would even ask questions like “how many windows does your next-door neighbor have?” This detention could last weeks, months or even years before the officials made their determination.

In 1910, within a few months of opening, District Commisioner North complained the detention barrack walls were being defaced by graffitti.  Maintenance workers would fill in the carvings with putty and repaint the walls but the detainees would carve new poems once they were done. When the facility was closed down, the word-lined walls were forgotten.

In 1963, Angel Island became a state park which led to the Ranger Weiss rediscovering the Chinese carved poems and messages carved in the old barracks. With the shifting of time, the words were now recognized as a anthropological treasure drawing scholars and tourists to the island.  The prisoners/potential immigrants had spilled their fears, longings and frustrations into words onto the walls trapping them while they awaited the official verdict. Some people died during their wait, through illness or even suicide so Angel Island is known to be haunted.

A museum was created in the barracks and people can read about the history of Angel Island as an immigration center and view the poems. More than 200 poems have been discovered along with other writings and images.

My being an Amazon affiliate does not affect your price. Amazon disclosure: “We are a participant in the Amazon Services LLC Associates Program, an affiliate advertising program designed to provide a means for us to earn fees by linking to Amazon.com and affiliated sites.” I appreciate your support for this site.

original photo used for my haiku/senryu (without senryu or additional text) is by Carol M. Highsmith’s America, Library of Congress, Prints and Photographs Division.