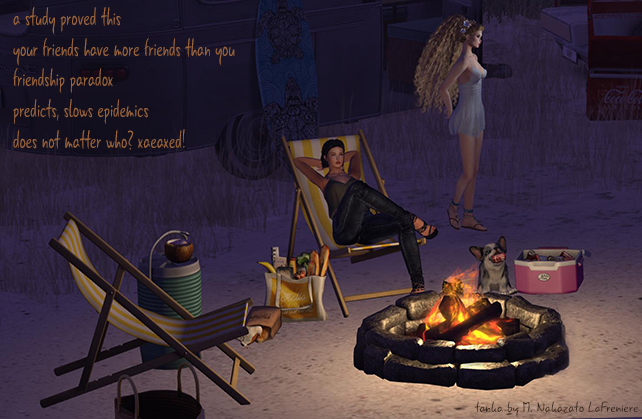 a study proved this
your friends have more friends than you
friendship paradox
predicts, slows epidemics
does not matter who? xaeaxed!

First off a definition (mindlovemisery did another Wordle — this is one word on it. Pick 10 words to do the challenge which I didn’t.). A rather obscure word.  Ok, a gamer’s word but I am putting it out there so everyone can use it because I really need this word in the dictionaries for Scrabble! It only took “amazeballs” ten years to get into a dictionary and this one is much more handy. Sleazeballs took 30 years and look how useful that one is proving. I love new words.

xaeax (prounounced ZEE-ax): to get drawn into useless circular logic from paradoxes; a state of confusion resulting from mind games

Sociologist Scott L. Feld observed the friendship paradox in 1991.  Apparently most people have friends who have more friends than they have.  This seems to work in social networks too.  Your Pinterest follower or Facebook friends have more followers or friends than you do when you average them all.

And don’t even go into Twitter, geez. They did a study just on Twitter and yes, it’s true, your Twitter followers and especially those you follow have tons more than you do.  You want to fix this?  Go follow a Twitter person who has one follower — that’ll fix your average, laughing.  The Twitter study, very long and complicated to read actually — a lot of stats and I’m not good at stats — boiled down to — people follow people who have the same or more followers than they do. In Twitter, and most likely in the other social networks, popularity breeds popularity and we are talking thousands to millions.

looking around, counting
everybody has more friends
wonderful life, not

(This video prompt from Haiku Shuu Kan was perfect today)

What surprises me is that they can use this idea  of a friendship paradox (that all the friends of people have an average number of more friends then they do) to predict the outbreak and stages of epidemics to slow them down.

This makes me wonder if the people who participate in tests are likely to be unpopular or antisocial.  Or if they are more likely to remember their more popular friends when writing down who their friends are.

Thing is, though, I don’t need a lot of friends to be happy.  I like my solitude (can’t write without it) but also enjoy/appreciate my few friends. I’ve always been the sort of person who generally has one or two very close friends who I see/talk to often salted with a mix of a number of acquaintances to good friends to socialize with or engage in group activities who I see infrequently (weekly or less). I can’t maintain a shitload of people in my life — it makes me feel jangly.  A partyer I’m not.

The richness in friendship is not how many but how you enrich each other through knowing each other.  The real paradox of friendship is usually you have just as many as you need.

[Note: to unxaeax the whole issue.  Friendship paradox is due to math. It’s how the law of averages work.  If you average the (total number of friends your friends have) divided by (the total number of friends) — that’s the average.  The thing is a popular person is more likely to appear more frequently in more friendship circles so that person gets counted more often and raises the average because they have more friends.  It only takes a few popular people to inflate the average. That’s why in the Twitter study a few popular people really inflated the average because people can have tons of followers — it’s not limited by face-to-face contact.]

Your friends are probably more popular than you – especially if you’re an extrovert, claims study
by Ellie Zolfagharifard, Dailymail.com, April 6, 2015

Study: Your friends really are happier, more popular than you
By Caitlin Dewey, Washington Post, January 14, 2014

How the Friendship Paradox Makes Your Friends Better Than You Are
A View from Emerging Technology from the arXiv
MIT Technology Review, January 14, 2014

Turns Out All Your Friends Have More Friends Than You
by Cari Romm, The Cut, May 19, 2016

photo taken in Second Life by M. LaFreniere, avatar Kayla Woodrunner visiting with her SL friend Jhan Bonde who is tons more popular than she is, lol