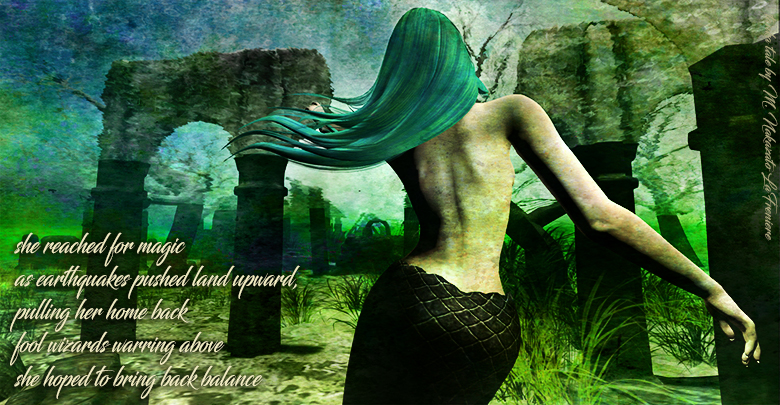 she reached for magic
as earthquakes pushed land upward,
pulling her home back
fool wizards warring above
she hoped to bring back balance

Ronovan Writes has a haiku prompt to use two words “magic” & “hope”  For my story, I did a tanka.  But here is a haiku as well (well, senryu really but close enough).

So I’ve been finding there is a thing called Freebie Friday where folks give away something.  Debbie Scott is giving out a texture each Friday so I through I’d try one from last Friday of January 5th.  She did a lovely watercolorlike texture using distressed oxide inks which I thought I might experiment with to make a mermaid image look underwater. I tried the texture in various blend modes over the image:

I ended up layering overlay, hue and linear burn at various opacity’s to get my final result. I think it is pretty cool that Debbie Scott gave away a very pretty texture.  I had a lot of fun playing around with it.

What do you think?