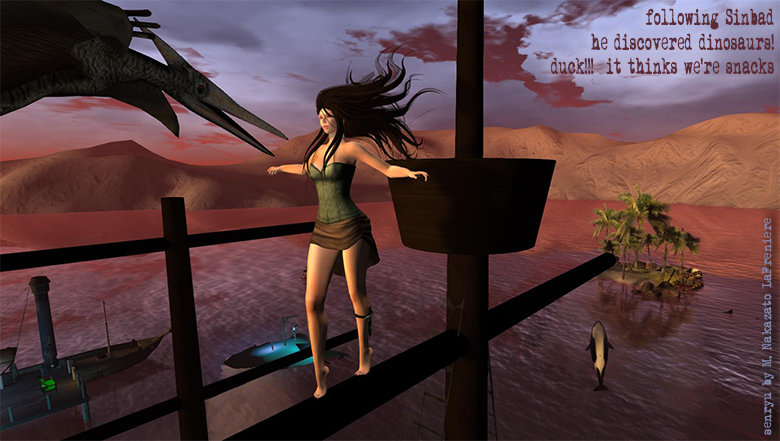 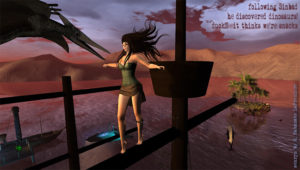 The dig in Baghdad went really well until Da was convinced he found Sinbad’s maps.  I tried to persuade him that the scholarly papers he could write on the dig and maps were enough – – he would be acclaimed at the University.  But no…. He wanted to follow Sinbad’s route to prove that these were indeed Sinbad’s maps.

So off we went.  Find a patron to fund this mad mission, find a ship (meaning finding a captain crazy enough to follow Da), get it outfitted (lots of salt pork, tea and orange marmalade — I didn’t think the oranges would last that long but we took a few crates — had to put off scurvy as long as we could) and the various other sundry things one must do for a journey of this type.

Of course, all Da’s archaelogy students were aboard with this — good thing because a few of them had rich fathers who cabled money and wanted a cut.  Reading some of those suggested contracts gave new meaning to the word “pirate.”  I cabled back to each we’d try to keep their kid alive, spend their money wisely but no promises could be made because we were following a fairytale so it was doubtful we’d find anything but if we did I would cable immediately and we would negotiate from there. I did suggest that any broken artifacts we did find were unlikely to sell for much cash but they could donate the items to the university museum and their name would grace the plaque for prosperity as generous patrons of whatever shards we found.

I would like to say they were kind enough to say yes but guess what? You can actually transmit cusswords by cable.  I myself was accused of being a kidnapper holding their child for ransom.  Uh huh.  I want their sons to go home because then maybe I could get Da to go home too.  Bunch of crazies. However their college-age sons refused to go home and sent their own flurry back and forth of cables.  A couple of them gave up on their parents and cabled fond grandparents or uncles instead.  In one case, a cynical student received money from two nasty siblings who were hoping to end up with a bigger share of the inheritance by losing their beloved brother. Nice folks some people are. In the end, we got the necessary funds although I don’t think we made many friends.

The ship set sail at dawn after the tenth day.  Da used his knowledge of ancient cartography and his copy of Ptolemy’s map of the meditarrenean in circa 140AD to help him decipher Sinbad’s map.  Third day out I saw a rusted steamer behind us — crap!  Pirates!  Hate those steampunks!

They caught up with us on the 5th day.  Turned out they weren’t pirates.  One of the student’s older brother had set out after us and that was the best boat he could hire on short notice.  He thought for sure his brother was being swindled by Da.  Talking to Da and his brother he threw up his hands and said both were crazy Bedlamites!  He refused to leave his brother so his ship stayed with us.  I didn’t mind — the guy was a good fisher so we had the best dinner in days.  And totally swoon worthy.  Way better looking than Da’s students. The man sure was grumpy though.  He should try having Da for a father.  Da was 68 years old and instead of being back in a comfy university office, here we were on the high seas.

Then we found an island on the map!   Da was ecstatic.  We made camp, threw up a few tents.  Weird fruit abounded but no one died and it tasted good.

Wasn’t long before we found an old remnant of a wall.  Da set out the perimeters for the dig.  The students were all happy taking notes.  Da was sure he’d found a place where Sinbad must have stayed.  I can handle a dig for a couple of months.  Life was back to normal — or as normal as it gets for us.  The sailors built a dock with a hearty will convinced this was an island full of pirate treasure.  I did not have the heart to explain to them that broken pottery was likely to be Da’s treasure.

It actually wasn’t bad … until the first pteradactyl did a flyover.

I think we found Sinbad’s Roc.

Carpe Diem #1346 The Seven Voyages of Sinbad the Sailor (introduction to the Theme week)
CARPE DIEM HAIKU KAI
The haiku inspirations continue with Scheherazade’s tales.  Next up: Sinbad!

Island of the Jewel. 1037 AD map in of al-Khwarazmi’s Book of the Description of the Earth (Arabic: Kitab Surat al-Ard), held by Strasbourg’s Bibliothèque Nationale & Univeritaire as its Codex 4247 (folio 11b). Via Wikimedia Commons.