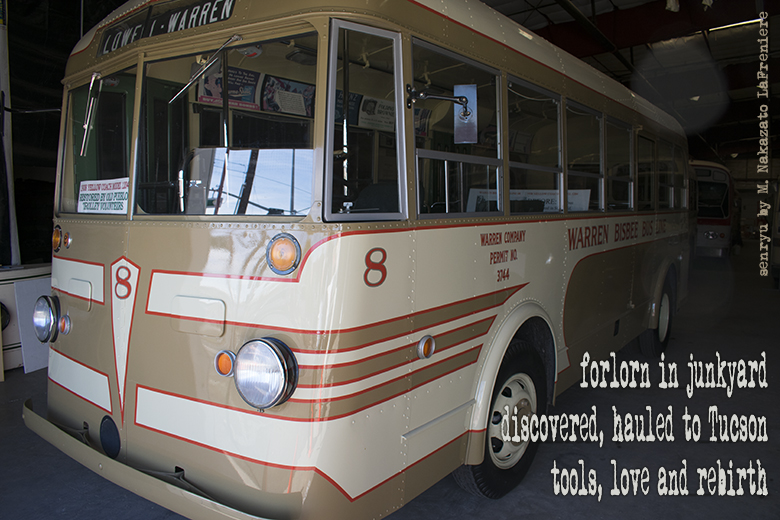 The murals (I haven’t shown you yet, lol) turns out to be in the backyard of the Old Pueblo Trolley, an operating transit museum.  It’s free to visit and it’s amazing, filled with old buses, trolleys and even a couple of antique cars.  They look for any transit vehicle — but it has to be a model that has run in Arizona at least some time in the past.

They renovate the vehicle, get it running and sometimes the transit vehicle gets a second life — one of their renovated trolleys actually runs on the weekends here in Tucson.  They do the work here so you will see the ones that are done, the ones that have just been carted back, and the ones that are going to used as motors or seats in one that has a better outside. 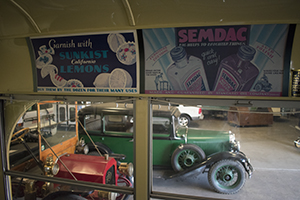 I was lucky enough that Mark Hart was there Sunday and gave me a tour.  The one used for my senryu is a 1938 Yellow Coach, model 1204, that ran in Bisbee back in the day when fares were a nickle on Bisbee’s line. The last Yellow Coach was retired there in 1955. Hart opened up their last bus for me and it was filled with information boards on the bus’s renovation and old-timey ads.

Bisbee numbered their buses consecutively 1-8 as they got them.  In September 1995, Old Pueblo Trolley volunteers found bus #8 in St. Davis, Arizona.  They were coming back after picking up the vandalized #7 bus from Orrin and Edna Soles who had originally bought it

with an idea of making a rural retreat. Bus #8 had a well cared for exterior as it was actively being used for storage while the #7 had a good chassis and running parts. When they got back, they moved the body of #8 on top of the #7 chassis. Lucky for the museum, the owners of #7 and #8 donated the buses.

Another major difficulty was the top of the transmission was missing and they could not get a replacement.  They finally borrowed one from a US Coach bus and sculptor Nick Burke and machinists Louis Grossman and Wade Musil replicated it. 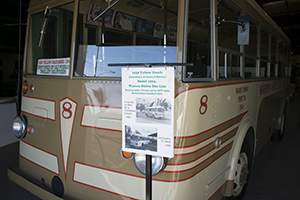 After eight years of hundreds of hours of volunteer sweat and smarts, and a Hanford California bus with good seats and dashboard, they finally got it running and ready to roll January 2007.  Local folks and businesses donated money (and their expertise) to match the $40,000 grant from the Arizona Heritage Fund (part in 1997, and part in 1999). Afterwards, the donations continued filtering in until the bus was done.  Now you can view it at the museum, and maybe on the road or at an antique cars exhibition.