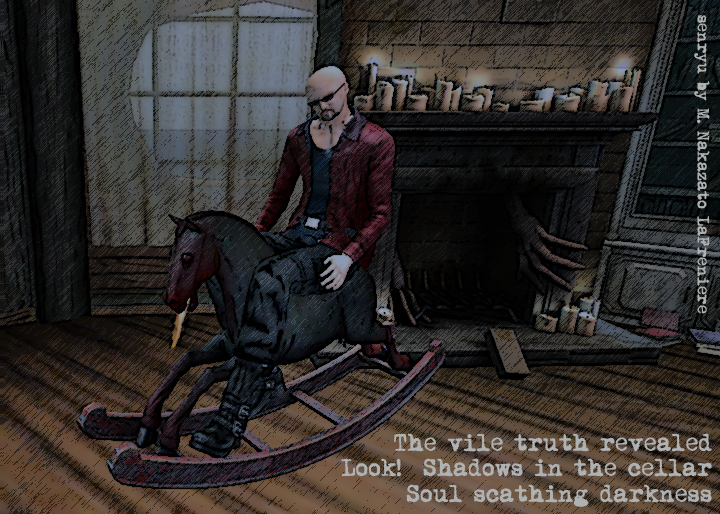 I was redecorating again. Winter came over and discovered my fire-breathing rocking horse. This is not a horse for kids! Handle with care! Plus it bites. Of course, when I said, “Be careful!”, he had to sit on it.

He started to tell me about some of his misdeeds when he owned the voyeur lounge. He even told me about the time he shook down Santa for change when he didn’t like his Christmas present.  He’s a nice guy until he starts talking.  Really he is!  Although he did warn me not to go down into his cellar…

I thought of going down when he wasn’t around.  Even opened the trapdoor just to peek but a seething darkness started surging up.  Scared the …. out of me so I promptly dropped the trapdoor and locked it.  I am not a cat!

Uh oh, I think he was bragging a little too much! That is not Kris Kringle coming down the chimney!

Except for a few edits just now, the story was written November 20, 2015, M. Nakazato LaFreniere.

Second Life photo by M. LaFreniere, avatar Kayla Woodrunner.
Thank you to Winter Phoenix for posing.  Hope he didn’t get eaten! I skedaddled.