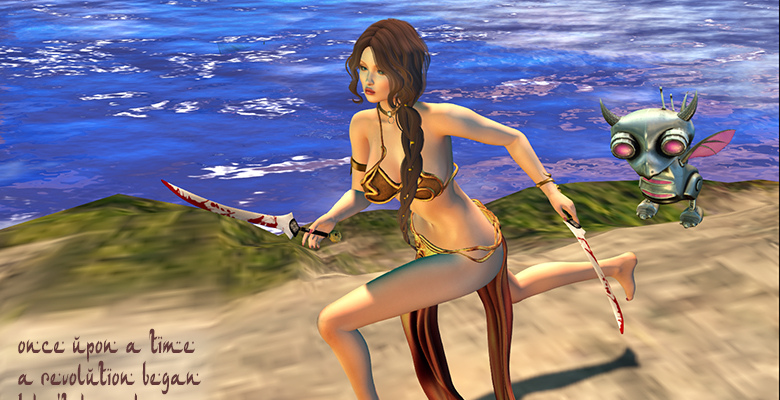 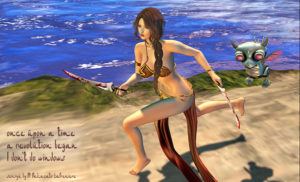 once upon a time
a revolution began
“I don’t do windows!”

once upon a time in a galaxy far far away …

“I get the job description. I really do. You have to do whatever your ownermaster tells you to. I did everything I was told. I practiced the sword dance for hours and hours on end as ordered even though knives creep me out. I slept on the floor. I ate gruel. But everyone has their breaking point. I was quiet, meek and obedient so of course the idiot tells me to do the windows. That was it! Well, I took care of him! Who knew all the practice for the sword dance would pay dividends? Only problem is now I have the whole countryside after me and I accidentally started a revolution. How do these things always happen to me!”

—-  So ends another cracked tale

Yeah, the picture is an obvious homage to Princess Leia.  I loved the original Star Wars. Carrie Fisher was awesome. Her writing showcased her courage and wicked sense of humor which I thought also came shining through the Leia back then. She is one of my heroes.

At Carpe Diem Haiku Kai, Chèvrefeuille is introducing Scheherazade’s 1001 Arabian Nights as prompts for haiku.  Tonight he shared “The old man and the hind” which was one I’d forgotten.  Growing up, Scheherazade was one of my favorite character because she was the only oldest daughter who wasn’t evil, vain or mean.  Usually the youngest daughter is the most beautiful and the sweetest.  And I’m an oldest daughter so she was cool.  Yep, another one of my heroes. She was smart, creative and was a great storyteller. hmmm, maybe she influenced me more than I thought.  Ok, I’m not a great storyteller.  I do scenes.  Maybe I’m a great sceneteller.  laughing.

my cracked tale originally written May 5, 2017.

Amazon (not so free). The Penguin Classics did all 1001 Arabian Nights stories in 3 volumes. I only list Vol.1 here as that will give the the links to the next two volumes if you decide you want them all. I listed the Arabian Nights miniseries DVD. There is also a downloadable video split into two parts: Arabian Nights – The Complete Miniseries, Part 1

. Carrie Fisher goes back and forth in The Princess Diarist

going back and forth between her diaries when she was young and her older self in the years she worked on this memoir published in 2016.

I am an Amazon affiliate so I may get a small payment if anyone buys anything by clicking a link. The sheet said 4.5% if it’s a book. I earned $3 in August and $3.41 in October, 2017 so not going to get rich anytime soon, lol. I think Amazon requires this next quote but I’ve noticed on some sites they have written their own personal disclosure text so I’m not sure. “We are a participant in the Amazon Services LLC Associates Program, an affiliate advertising program designed to provide a means for us to earn fees by linking to Amazon.com and affiliated sites.”