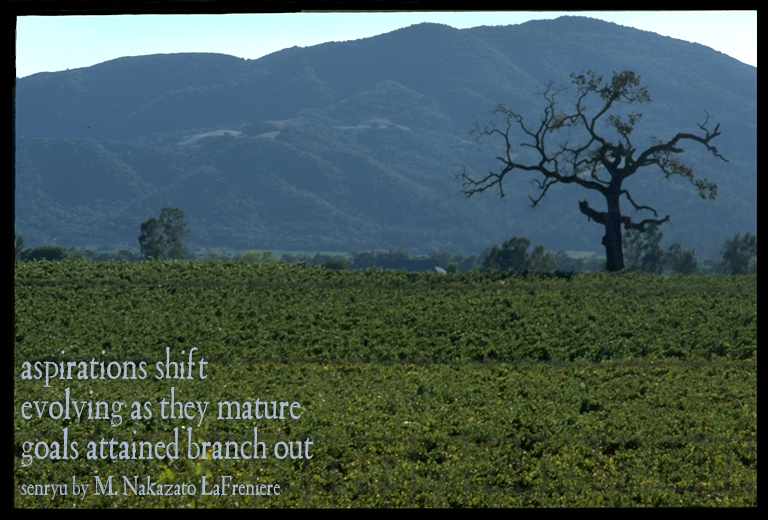 aspirations shift
evolving as they mature
goals attained branch out

First off, I apologize to anyone who got pingbacks from me today from Onblogging.net when I updated the posts I exported from RestructuringLife.net.  I did not realize the pingbacks would retrigger when they were updated in their new home.  I am splitting my old blog so I felt Colleen’s prompt this week really suited this past week as I reconsidered my blogging and made changes.

In the beginning, there was a blog

Last July I decided to start a blog called RestructuringLife.net.  It wasn’t the best name but after my first five choices or so were already taken, I was thrilled to find one that wasn’t.  I was at a point in my life when everything changed and I didn’t know what I wanted or needed except that I wasn’t ready to go find work and just do what someone else wanted or needed. I had been so long focused on my mom and her health that I had no clue as to what I might want. So I decided to write while I figured things out. I penned my first post on July 10.

I tell people when you start a blog, just write.  You find out what you want to write about by writing.  Some people have already been writing for years or have a clear path in life so they already have a very clear idea what subject matter pulls at them.  For many, it will be a discovery process.  It was for me.

I went to a women’s blogger meetup in town and someone mentioned the Daily Post.  August 7th, I wrote my first Daily Prompt post to shimmering called Shimmering sunsets, senryu and wild geese.  It was the first haiku/senryu I had written in a long time.  My first haiku, like a lot of people,  was in grade school as an exercise in English. I had written them every once in a while — like maybe one every few years.  I decided if I was going to write daily, the 5-7-5 form gave me a structure and was short enough that daily felt feasible.

That changed everything for me.  I fell in love with the form.  But the daily poems soon swamped anything else on RestructuringLife and definitely did not fit the name so I spun off CactusHaiku.com on September 14th and exported my poetry. 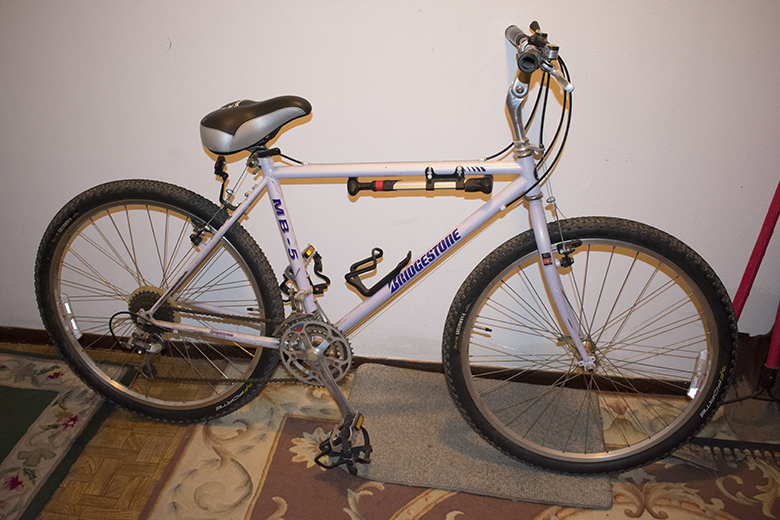 RestructuringLife.net continued to limp along as I spent most of my energy on CactusHaiku.  I started up a volunteer thing at the library helping people get started on blogging.  So started putting up some posts about blogging, partly so I wouldn’t forget something that I did once in case someone asked how to do that thing.  I also started putting my poems on images so started taking photos again and did a few photo/digital imagery tutorials.  I also wanted to do my lifestyle stuff —  I need to learn to work on my car–well, actually I think I’ll move over to a biking mode of transport (bought a bike!), reorganize the house, do more cooking at home.  I feel ready to work on my home changes and I do better if I have deadlines.   Blogging self-challenges works for me.  It helps me create mini-goals and see my daily progress.  Otherwise I procrastinate like crazy.

So over the last week I was thinking about my goals for the year and about my blogging.  I am happy with CactusHaiku.  I view the blogs of people who like or comment it and so have read or seen some fun photos, essays, fiction and poems.  It’s like a get a little window to other parts of the world, lives and mindsets.  I have a couple goals there:  more haibuns about Arizona and learning to layout an ebook.

I realized RestructuringLife.net was a mess.  For one thing, almost all the comments I get there are from spammers who want me to buy content.  Irritating because I write my own content which if they would just read a post or two, they would know.  The name is still too long and doesn’t stick in people’s mind.  I also realized the remaining posts sans poems fell into two categories: lifestyle and blogging/imaging tutorials. 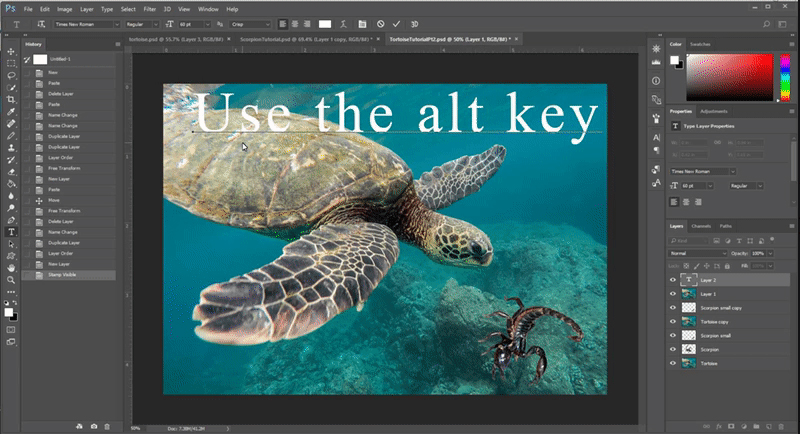 I bought Onblogging.net for the Photoshop tutorials and blogging stuff.  Onblogging.net cost $11.99 to buy.  Onblogging.com costs more than $2,000.  It was a pretty easy decision to get .net.  I wonder if you’re a speculator and buying names at random, how long before a potential wants to buy it and you get your money back.  Or maybe it was a website/blog that someone got tired of doing so they just closed but kept the name.  Anyways, I thought it was curious.

So last night I imported my old posts into Onblogging, selected a new theme, changed some categories and went through to redo some titles and fix the pageviews.  Pageview numbers don’t export but you can change that.  I didn’t realize that some people were going to get a lot of pingbacks because I forgot how many people and websites I mentioned when I was doing the “Double Pageview challenge” for a couple weeks a few months back.  So when I hit UPDATE, and I hit update on each one, the pingbacks were sent out again.  Now I know for when I do CactusCatz to turn off pingbacks while I bring those lifestyle posts on board over there.

I realized I did the pingbacks when I opened the Onblogging menu today and got a comment from Colleen from Fairy Whisperer thanking me for mentioning her poetry challenge.  I thought “what?”  And then I realized some people got a lot of pingbacks.  When I had done the “Double Pageview Challenge”, I had turned off pingbacks once I realized how many were going out.  I didn’t realize I needed to turn them off again on my new blog because I thought of these as old posts even though I imported them into their new home.  Facepalms.

So for Onblogging.net the goal is to do two posts a week: one for the Thursday group and one tutorial a week.  This week, I’ll probably do one on the hazards of updating imports, lol.

On CactusCatz.com, my lifestyle one.  The more immediate goal is to choose a theme, check the categories, and check the posts that imported (turning off pingbacks, lol).  The longer term goals — I’d like to do a couple of short-term challenges — get on the bike and rearrange the livingroom.  The walls still have empty spots from the pictures I gave to my brother and I have shelves on the floor to put together because the livingroom is the only spot big enough.  A lot of my stuff is still packed in the garage from my move from California 8 years ago so I want to bring that stuff in and move some stuff out.  Also clear a bedroom to make it a blogging room because right now my livingroom almost looks like a studio apartment with the laptop, printer, books, table and stuff out.

Longer term goals is that I want to go on a long roadtrip and my two cats hate each other.  Right now when one is out in the house, the other is locked up in their room.  They take turns roaming the house.  If I go on a roadtrip, I want to take them with me which means I hope they can learn to like each other — right now that’s a tad doubtful or I’m going to need a huge camper with two bedrooms, lol.  I haven’t figured out the logistics of the roadtrip yet — vehicle, funds, etc.  I just know the path I want to follow, take photos of and write about.  It’s been on my bucket list for decades and I want to do it before my health fails and it’s not possible.

I picked the name CactusCatz.com partly because of Pinkie and Midnight.  Plus, I’m a Leo so that’s a cat of sorts.  No matter where I go, I’m taking Pinkie and Midnight.  Since I already had Cactus Haiku, CactusCatz seemed like it fit.  I haven’t decided how often to blog on CactusCatz — it’ll depend on whatever challenge I’m working on at the time.  While it’s my lifestyle blog, I also see it as more my personal blog to help me get things done.  My essays, fiction and nonfiction prose will likely be tucked under Cactus Haiku like they have been. 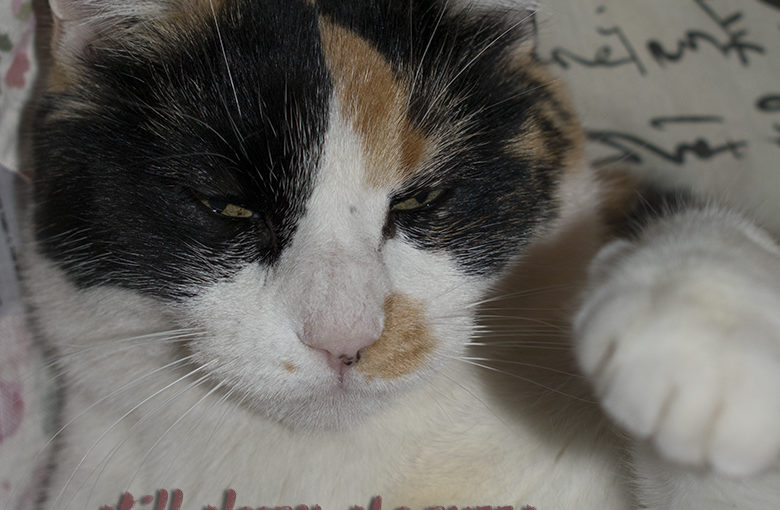 So RestructuringLife.net is coming to a close.  I am deleting posts as I check them in their new homes.  RestructuringLife helped me a lot when I felt lost.  Now I am waving good-bye. My first blog helped me build new structures to house the life I am creating but its branches sprouted, putting out new blogs.  One thing I have learned living with someone who had dialysis three hours a day, three times a week — when your health goes, your choices become more limited.  It’s important to do some things while you are healthy enough to do them instead of putting it off, thinking you can do it next year or the year after.  This year I want to convince Pinkie and Midnight to be friends, go on a very long roadtrip (I’ll tell you the path as I travel it),  and maybe write a book. Yeah, I’m not convinced about a book  although I have this itch to do Nanowrimo this year.  I also have an itch to make minivideos so one or the other.

Last year was defined by “Where do I go from here?”.  This year is more of “I want to get over there. (looks across a deep chasm) huh, how do I get there?”

Thanks for coming this far with me.  All of you have also been part of my blogging/poetry journey and I appreciate you for it.

No. 65 : ambition & change
Colleen’s Weekly Tanka Tuesday Challenge
challenge this week is to use synonyms of ambition & change.  While the title lists Tanka, she explains the following forms: haiku, tanka, haibun, cinquain, and senryu so I believe you can choose the form that suits you or your poem best.