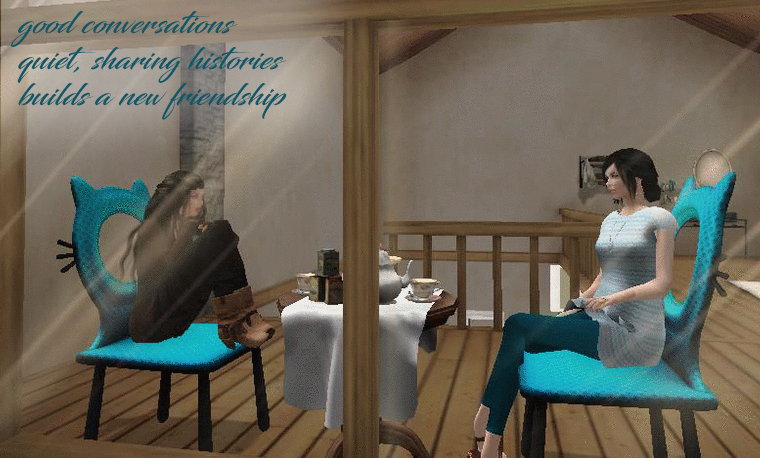 Jhan became my first Second Life friend back in January 2015 when this photo was taken. Until then I had had only acquaintances or one-off conversations with folks. I didn’t do social networks back then — no facebook, or whatever and I disliked email.  I preferred hanging out in person. I wasn’t a technophobe — I just didn’t understand becoming friends with people I’d never met.  Being shy, I made friends slowly through activities where I met folks on a regular basis.  I’m still like that.

Initially Second Life was more like one of those find games for me.  After I finished that first master’s course in library science which met in Second Life, I would come back here as an escape for an hour.  Stores would have hunts — if you find the object, you get a freebie to put in your inventory.  You get tons of stuff that way but you don’t really meet people — any more than you’re likely to make a friend in a mall.

I got into breeding virtual kittycats and eventually went to an auction to sell one of my cats.  The auctioneers voiced, calling out the number describing cats and accepting bids.  Folks bid in chat.  At my first auction, Jhan bought my cat.  Then she started IMing me, asking questions about how to breed for specific traits.  I wasn’t good at the selling of cats but I am good at the math for breeding.  I also did love math.  So I helped her improve her cats.

I never had anyone IM me frequently like that so it was a bit of a surprise but I like helping people so it was fine.  After awhile, the conversations became more personal and we would sometimes talk about our real life.  She was there for me when my mom passed. Through her, I learned how to chat in Second Life on a more personal level and I made other friends in the coming years.

Recently her mom passed and it’s been real tough for her.  I wish she lived closer because I’d go over, give her a hug, bring over some food, something hot to drink.  Sometimes you don’t really want to talk about it but it’s nice to know someone cares, that they’re thinking about you and that they hope it will get easier and through physical actions they can show their caring.  Sometimes when you’re grieving you want to share the grief, cry on someone’s shoulder and sometimes you need a distraction, a momentary relief from the heavy feeling of that hole that’s been dropped into your life. In person, it’s easier to know which way to go, talking, sharing, comfort eating, distraction, comedy relief because you can read their face, their body, their mood.

But in a virtual friendship, words are all you have to share, to give.  Words aren’t enough sometimes but they have to do.  Too heavy? Yeah.  You can also provide a virtual distraction.  Maybe go look for dragons.