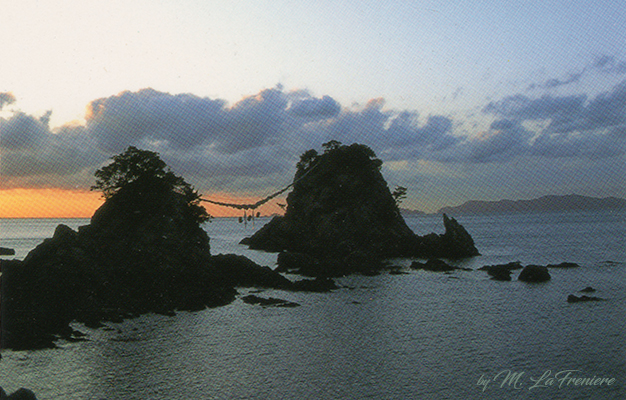 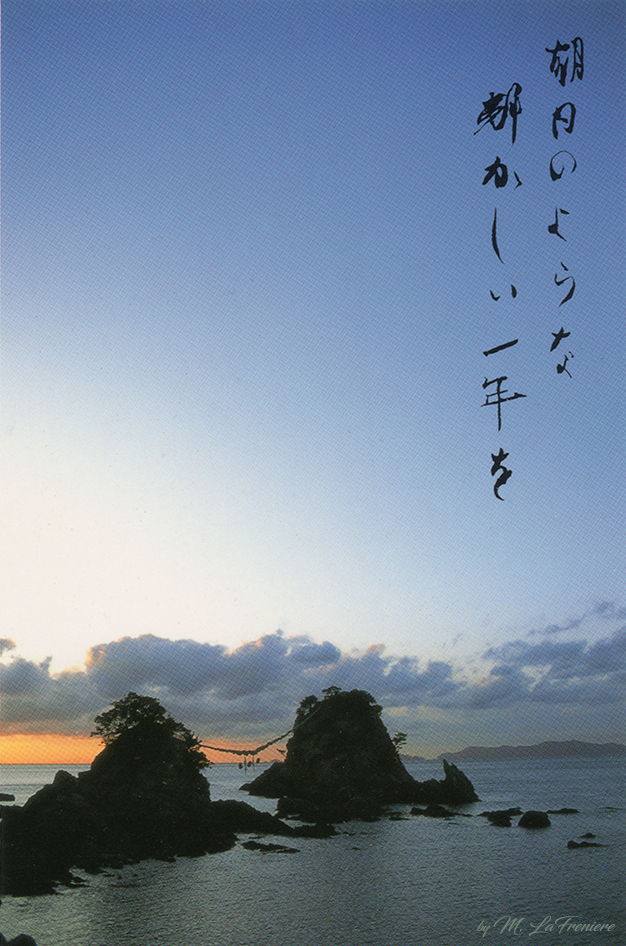 Honestly today when I woke up, I thought it was January first so I went looking for this postcard.  (Shakes my head … it’s only the 30th!) This image has moire lines from scanning a postcard I made 30 years ago.  The original image  is stuck among a huge collection of my scanned slides and photographs on a dead hard drive.  Luckily, I have a lot of leftover postcards so I am able to scan a few of my old photos.

Decades ago when I was living in Oita, Japan, teaching English, I set out to make a new year’s card.  I knew I wanted the dawn’s light on rocks I remembered seeing on the coast a couple hours south of Oita.  I got up early in darkness and drove down.

The straw rope and folded paper hanging between the boulders means it’s sacred in Shintoism.  You’ll see that on torii gates, on trees, and like this between two giant rocks.  It wasn’t some place in a guidebook, just a place I found while driving down the coast toward Miyazaki so I don’t know the back story.  Luckily I wrote the name of the place on the postcard: Kamiura so I can google it.  That’s one thing I enjoyed living abroad — just finding places that feel special to you and completely different than anything back home.  I loved that the boulders were sacred even if I didn’t know why.

(Later on same day:  I googled Kamiura and following links, I found this on the rocks quoting welcomekyushu.com:

The 17m “male rock” and the 10m “female rock” of Bungo Futamigaura are linked by a 65m, 2-ton strip of Shinto consecration straw rope measuring 75cm in diameter. The symbol of Kamiura, this particular strip of Shinto rope believed to be fending off evil spirits is the longest one of its kind in the country, which consequently led to its listing in Guinness World Records in 1994.
Bungo Futamigaura is also known to be a scenic spot for viewing the sunrise on New Year’s Day among the natives. Between early March to early October, the sun rises right in-between the two rocks, drawing numerous spectators to the area for the early morning view.)

I wrote out “May your dawning New Year shine bright” and asked Nobuko to translate it for me.  I remember another Japanese friend said that’s a very American sentiment.  I wish I could remember now how it was different than what a Japanese person might write but that conversation was about three decades ago. 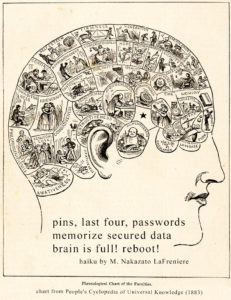 Memory is strange like that.  You have unmoored fragments rise up but they are islands in a vastness of unremembered areas.  When you tell stories of events that happened over and over, they reinforces the memory, keeps it fresh.  At more than age 50, I know people who remember the hurts of their 20s but not the joys and others who remember the joys.  Both had both but guess who feels like they have a happy life because they retell over and over the good/happy/joyful/funny things that have happened or they have done. You can choose what you remember.  As you do or tell certain things over and over, neuron pathways get worn into your brains making it easier to remember or do the next time.  There is an actual physical effect.

Luke Mastin on the Human Memory site explains: “As such a neuronal pathway, or neural network, is traversed over and over again, an enduring pattern is engraved and neural messages are more likely to flow along such familiar paths of least resistance. This process is achieved by the production of new proteins to rebuild the synapses in the new shape, without which the memory remains fragile and easily eroded with time. ”

I was so caught up in my angst in my 20s — I wish I had known then what I know now.  I would have told different stories.  So many good times I’ve lost because I did not retell them often enough or write them down.  Pain is given too much weight. Happiness is too often taken for granted and the memories slip away.  I used to feel it was kind of braggy to say you were happy.  It’s partly an Asian superstition — if you talk about how good your life is, you are inviting bad luck so it’s better to be humble and talk about how little you have as that invites good luck.  But you know what — life is a wheel.  In it’s time good and bad luck eventually comes; good and bad events eventually comes; you will meet good and bad people eventually.  There is a zen parable:

An old man and his son had one horse.  One day the horse escaped over the fence and ran off into the hills.  “Oh, no” said the son.  “We have so much bad luck!”

The son searched all day but could not find the horse.  The next night at feeding time, the horse returned followed by 11 wild horses.  “Oh wow!” said the son, “Now we have 12 horses!  We have so much good luck!”

The next day, the son rode one of the wild horses to try to break it in and train it.  The horse bucked him off and he broke his leg.  “Oh, no” said the son.  “We have so much bad luck!”

The next day, the government came through, conscripting every able-bodied young man and woman, taking them off to the front lines to fight in a war.  The son was left at home with his broken leg.  “Oh, I am so lucky!” said the son.  “We have so much good luck!”

While the morale of the story is don’t get too happy and don’t get too sad because life is always changing so don’t cling to emotions or something like that, I wonder forty years down the road, does the son remember hunting all day unsuccessfully for the horse or the horse bringing home a herd or breaking his leg.  He isn’t going to remember everything — only what he reinforces even though his life had “good” and “bad” events.

Of course his father would probably just let everything go and just live in the moment.  I am working on learning to live in the present but have a long ways to go.  His father would write a very short blog post (really? you say, a short post — I like those!  so I stick my tongue out at you — you’re getting a long one today because a year is almost over and I am thinking about memories) 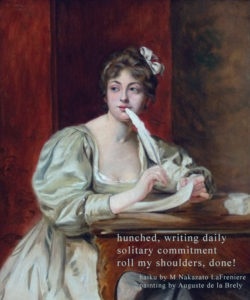 Along with your verbal recountings, photographs serve as anchors.  Each time you look at them, you remember that event which serves to preserve that little island of memory.  Diaries, letters also serve that function.  I expect these days blogs do as well.

I remember Deborah, from Colorado, was taking calligraphy at the time so she wrote out the phrase Nobuko translated.  She was doing well at her level but really had only been doing it for a few months at that time.  I remember Deb said that studying calligraphy was much more of a workout than she expected and that she was glad she was  a cyclist.  On a large piece of paper, she said you use your whole body to write.  I scanned her writing on a normal sized sheet of paper and layered it on the image.

I remember the first time I drove down that road past the boulders was with Nobuko on her one day off from work.  She was my boss at the English Conversation school I taught at but off-hours we were just friends.  She just wanted to lay out on the beach near Miyazaki and I was hoping to find a good beach to take photos at.  We had a good time.

How do you know it’s bad luck?
by Shirdi Sai Gurusthan Mandir, November 22, 2015
Shri Shirdi Sai Gurusthan Mandir – Daily Parayana of Shri Sai Satcharitra
(Note: I originally read a version which was an ongoing conversation between the father and son but couldn’t remember much except the breaking the leg so Google helped me find this version.  So I took this version and merged it with the admittedly faulty memory of the one I first read to retell the version up above)

Saturday Mix – Same Same But Different, 30 December 2017
Mindlovemisery’s Menagerie
Today Weejars challenges us to make a poem with synonyms of:
(my synonym in parathensis)

On Amazon:  The first book Kojiki I initially looked at because the cover is similar to my Featured Image today .  It sounds really interesting: quoting from Amazon “Japan’s oldest surviving narrative, the eighth-century Kojiki, chronicles the mythical origins of its islands and their ruling dynasty through a diverse array of genealogies, tales, and songs that have helped to shape the modern nation’s views of its ancient past. Gustav Heldt’s engaging new translation of this revered classic aims to make the Kojiki accessible to contemporary readers while staying true to the distinctively dramatic and evocative appeal of the original’s language. It conveys the rhythms that structure the Kojiki‘s animated style of storytelling and translates the names of its many people and places to clarify their significance within the narrative. An introduction, glossaries, maps, and bibliographies offer a wealth of additional information about Japan’s earliest extant record of its history, literature, and religion..”  “In search of memory”  — I love that title.  I’m still looking for mine.  Let you know when I find it!

Disclosure: I am an Amazon affiliate so I get a small percentage when links are used to buy things.  Books are 4.25%. My first buy August 2017, I received $3.00 for a Fire TV Stick with Alexa Voice Remote | Streaming Media Player

purchase.  Yay!  In October I earned $3.41.  So far that’s it so I’m not getting rich anytime soon, lol. Amazon requires the following text: “We are a participant in the Amazon Services LLC Associates Program, an affiliate advertising program designed to provide a means for us to earn fees by linking to Amazon.com and affiliated sites.”