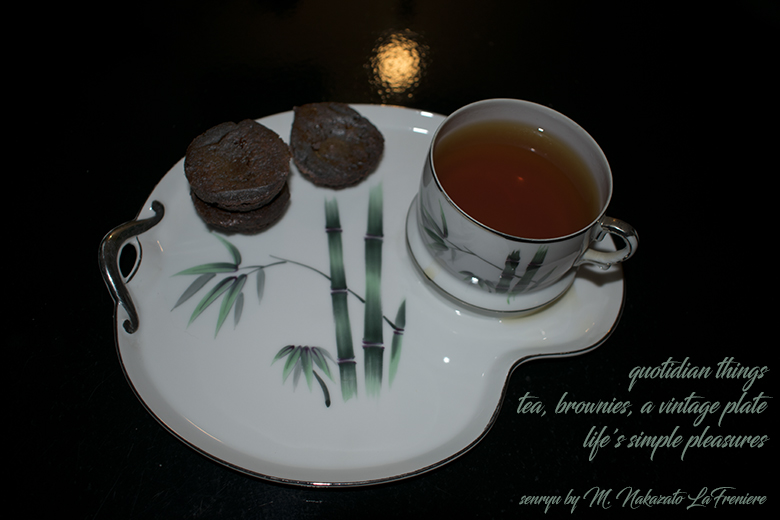 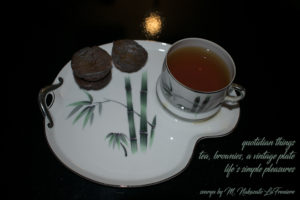 Dutch goes the Photo has the challenge “quotidian” for the week.  I hadn’t seen the word before and had to go look it up. I just love that word: my new word for the week.  It rolls off the tongue. It means “everyday, ordinary”.  To me, it’s a reminder that even everyday things can be special.

I love this vintage snackplate and teacup.  Some people call it a sushi plate but it’s really not.  A sushi plate would not have a European-style teacup with a handle. If you look closely at the little lip at the bottom of the teacup, you will see it is not a separate saucer but a part of the teacup.  There is a little circle on the snackplate that the cup rests upon. 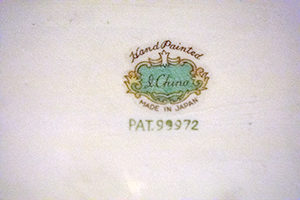 The bottom of the snackplate is the label: “Hand Painted, I. China, Made in Japan, Pat. 99972”.  Japan is called Nippon in the Japanese language.  So until 1915, imports would be marked simply “Nippon.”  In 1914, the revised McKinley Act required the phrase “Made in” although it wasn’t always enforced.  So from then, things were usually marked “Made in Nippon” but might still just be “Nippon.”

In 1921, the customs bureau ruled that imports had to be marked with the English name of the country and not their own so from then on, things were marked “Made in Japan.”  At that time in the U.S. anti-Japanese immigration sentiment had grown.  In 1922,the courts ruled in Takao vs U.S. that a Japanese immigrant could not become an American citizen no matter how exemplary their life or their contributions to their community — specifically only white immigrants and blacks from Africa could. The Civil War was judged to have won Africans the right to be able to become American citizens but any other nonwhite person were excluded simply because they were not white. Also in 1922, the Cable Act stripped any white American women of her United States citizenship if she married any immigrant ineligible for citizenship (meaning any nonwhite immigrant not from Africa even if they have lived here for decades.)  However children born in the United States were automatically citizens no matter their color.

After WWII, Japanese goods backstamp changed again as from 1947 to 1952, imports from Japan were marked “Made in Occupied Japan”.  With 1953, it went back to “Made in Japan”.  It’s easiest to date a plate if it says “Occupied Japan” or “Nippon.”

I could not figure out which company made it.  The middle area is the name of the china set I’m pretty sure.  I say this because I saw the exact same thing on another site but it said Kutani as the name.   Set of Kutani on ebay — the person took a lot of pictures.  The first one the shape is the same as mine and the sixth one shows the “hand painted” in the same cursive and the “pat. 99972”.  So you can see my “I. China” and the “Kutani” is really just the name of the set.   I saw another one that said “Hira China”.  Japanese companies were also used to using symbols rather than the name as a signifier so it’s possible the surrounding frame actually identifies the company.  It may even be an American company which manufactured in Japan like Lefton did. (I love Lefton China — I have a gorgeous hand painted teapot). 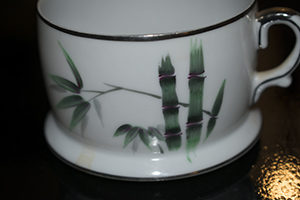 I think only one company can file a patent so it’s a bigger clue.  I am thinking the patent referred to the shape of the cup and how it fit with the plate.   Problem is when I googled 99972 patent  I got a furnace in 1906 so it was no help.  Ah well, the mystery continues.

Probably the plates are from just after WWII so 1953-1959 because some companies stop putting their name or used an alternate name on items for a short time after WWII because they said they could not get quality material. Noritake used “Rose China” for instance and did not return to using Noritake until 1963.  Since I’ve seen “Rose China” and it’s pretty nice, I think the Japanese companies may have done not used obvious sounding Japanese names because many Americans were prejudiced against anything Japanese after WWII. My American grandmother refused to acknowledge my dad’s marriage in 1960 because of my mom’s Okinawan ancestry.  She acknowledged us grandkids and mom in 1964 after my brother was born (he was grandkid #3 by that time) — note: that Noritake took back their name in 1963 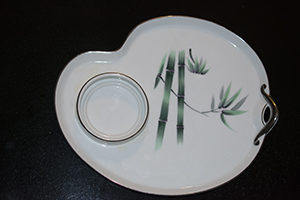 so I feel that prejudice against Japanese in the United States was beginning to wane about that time.  In 1952, people who were not white or from Africa could finally become American citizens. I think my mom took her exam in 1961 after my dad was stationed in New Mexico.

That’s why I like vintage things.  They are ordinary but they also reflect their times.  It can be as simple as the name of the country on a backstamp hinting at the prejudices that triggered changes in laws and regulations. Even “dishwasher safe” or “microwave safe”  tells you what new technologies have become common place, dating a piece.

I don’t know the manufacturer or the dates on my snackplates.  I may find out more one day for certain … or not.  I still like the snack plates with or without the knowledge. Eats another brownie.  Breakfast of champions, lol.

Immigration and Nationality Act of 1952
Wikipedia

Why the 1920s U.S. Ban on Japanese Immigrants Matters Today
By Shotaro Oshima, HuffPost (doesn’t give a date but does refer to a Dec 9 speech by President Obama commemerating the 150th anniversary of the 13th amendment which took place on December 9, 2015)

I am an Amazon affiliate so I may get a small payment if anyone buys anything by clicking a link. The sheet said 4.5% if it’s a book. I earned $3 in August and $3.41 in October, 2017 so not going to get rich anytime soon, lol.  I think Amazon requires this next quote but I’ve noticed on some sites they have written their own personal text so I’m not sure. “We are a participant in the Amazon Services LLC Associates Program, an affiliate advertising program designed to provide a means for us to earn fees by linking to Amazon.com and affiliated sites.”