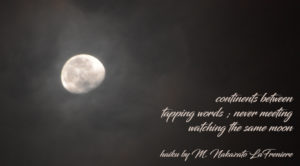 Chèvrefeuille quotes from The Valkyries by Paulo Coelho as inspiration for a poem in a Japanese poetry from:

[…] “There is no sin but the lack of love, have courage, be capable of loving, even if love appears to be a treacherous and terrible thing. Be happy in love. Be joyful in victory. Follow the dictates of your heart.” […]
Recently, in November 2017, the 15 years of love letters between Albert Camus and Maria Casares were published.
“What I have said, written or done since the spring of 1944 … is different from what happened inside me before. I have breathed better, I have hated things less. I have admired more freely what deserved admiration,” Camus wrote in 1949. “With you, I have accepted more. I have learned to live.”

“Tied to one another by the bonds of the earth, by intelligence, heart and flesh, nothing, I know can surprise or separate us,” Camus wrote to Casarès in February 1950.

“We met, we recognised each other, we abandoned ourselves one to the other. We have lived a love of burning, pure crystal. Do you realise what happiness we have, and what has been given to us?” she wrote to him in June of the same year.

Both busy with their careers, his literary and hers theatrical, Camus and Casares corresponded through incendiary letters and telegrams until 1959.  They met in June 1944 but their first affair ended when Camus’s wife returned to France that October.  Years later, a chance meeting rekindled the affair, writing daily until Camus’s death in a car crash coming back from a family vacation. At the time, Camus was married and had two other mistresses. His last manuscript, The First Man, was in the crash.
Lara Marlowe wrote, “Camus conceived of his oeuvre in three parts: the absurd, derived from man’s unanswered questions about his own existence; revolt, which was the only salvation from the absurd; and love. He had only begun to broach the subject of maternal love in The First Man, the unfinished manuscript found in the wreckage of the Facel Vega sports car and published 34 years later.”
Camus’ biographer Olivier Todd had once quipped, “”I did not write a book about Albert Camus’ love life. Even a telephone directory wouldn’t have been long enough for that!” Camus’ infidelities were devastating but still his wife, Francine, stuck with him. And yet, Camus daughter Catherine was moved to purchase the love letters in 1979 from Casares (after her mother’s death).
In her 1980 autobiography, Casares discussed her love affair with Camus but didn’t quote from his letters.  Given the letters were sold to his daughter the year before Casares autobiography came out, I can’t help wondering if at that time she bought them to keep them from being published — perhaps she worried about what her father wrote. When Catherine released the letters, she wrote in the book’s introduction, “Their letters make the world more vast, space is more luminous. The air is lighter, simply because they existed.”
I admit I feel some ambivalence towards the Camus/Casares affair as his having other mistresses at the same time undercuts the romantic ideal of “one great love”.  Yet I would love to read the collection of letters.  Unfortunately, I don’t read french and it has yet to be translated into English.  Sighs.
Carpe Diem #1325 follow the dictates of your heart
Carpe Diem Haiku Kai
Tuesday Platform by Rommy: Open, share a poem
imaginary garden with real toads

Albert Camus’s sizzling letters to one of his three lovers
by Lara Marlowe, The Irish Times, November 25, 2017

Camus letters show secret passion for love of his life
By Alain Jean-Robert, The Times of Israel, November 11, 2017

Disclaimer: I have signed up as an Amazon affiliate so I may get a small payment if anyone buys anything by clicking a link. The sheet said 4.5% if it’s a book. I earned $3 in September and $3.41 in October so not going to get rich anytime soon, lol.  I think Amazon requires this next quote but I’ve noticed on some sites they have written their own personal text so I’m not sure. “We are a participant in the Amazon Services LLC Associates Program, an affiliate advertising program designed to provide a means for us to earn fees by linking to Amazon.com and affiliated sites.”