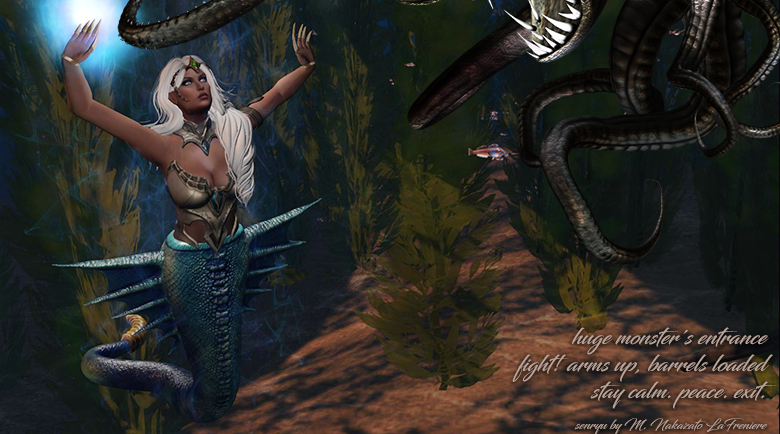 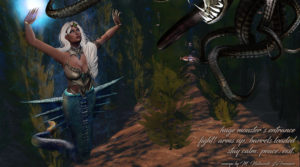 The tentacles reached towards me. Not to mention the gnashing teeth!

Quickly I moved my hand back, mentally chanting the spell. As the first words formed, my hand glowed.

OMG! What was the last word of that spell?!!!

Stay calm, I thought. Yeah, right. The word will come. Well, it better hurry! The only spell that came to mind was the one where I understood all communications. Not helpful when you are about to be eaten!

Just then out of the corner of my eye, I saw colors flashing. I couldn’t help but look.

OMG! It was another one and it was 10x bigger.

The one in front of me flashed colors, from purple to dark green, almost sullenly.

Since it was the only spell, I could remember at the moment, i spat out the communication spell.

Weird, suddenly the colors going back and forth made sense.

“Why aren’t you with the pod in school?”

I glanced round to see what had been following it but nothing was there.

A large black ocean of an eye peered down at me.

“What do you have there?…. A sea witch! Oh no! Those nasty things! No, you may not! They bite and carry diseases. I’ll get you a nice whale. Besides there was a color flash that they are endangered now so just leave the nasty thing in the wild.”

“Let’s go. If you’re good, we’ll talk about what kind of whale you can have.”

Reluctantly the junior kraken swam to his mother. Geez, there was a school of those things?!!!

And then I remembered the last word of the blasting spell as mom and kid disappeared into the distance. Ah well, lucky I didn’t remember it earlier. I shouldn’t have jumped to violence as my first alternative anyways. It was just a kid after all.

A word about Second Life

In this photo, I used Photoshop to jazz it up some so I thought I’d go a bit more into detail for the pic because in a lotta ways, SL photos are collaborative efforts a lot like movies in that different people create different things.  In real life, nature photos are not collaborative because everything is made by nature, God, Allspirit or whatever your personal beliefs feels makes the world around you.  In urban area, photos are collaborative like second life in that almost everything around you is made by other folks like buildings, cars, sidewalks, etc.  It’s just easier in SL to know who made something because most of the time you can right click on something to see the creator.

The viewer I use in SL is Firestorm which is also my camera.  It allows me to use wide angle, close up or normal on a sliding scale which is very helpful.  It also allows me to control time of day and I can set different skies or water for differnt lighting settings.

Photoshop: Base of the image was this pic
www.sluniverse.com/snapzilla/image/view/593034/Kayla-Wood…
(Note: on blue flaming ball and swirling blue mist — that is not a special effect. That was in SL through wearing the Eternal Flames)

I thought the picture needed a little something for umph and thought Kraken! with the help of Roy3D at Deviantart, it was added in. Sorry i do not have a kraken at my island.

Added some things in:
For texture on the seafloor used on a blend mode
286 Underwater lagoon, by Tigers-stock
tigers-stock.deviantart.com/art/286-Underwater-Lagoon-244…
Resized it so it more than covered my pic, used the hue layer to change it to black&white then merged hue & layer, used levels to increase contrast & merged
Blend mode: Color dodge; opacity 30%

For the kraken kid
Tentacles PNG Stock art by Roy3D
roy3d.deviantart.com/art/Tentacles-PNG-Stock-532860018
The way I colored it was kind of complicated and I didn’t write down all my steps since I was doing it on the fly and experimenting. 85% of the color was from the stock art including the sheen. I just added a little more colors and a little more texture.
I used several of the tentacles from his stock page at 100% opacity as the base layer
Then I colored them purple on another layer, made a pattern from a purple texture I made, used the craquelure filter, used blur tool to bring down the cracks instensity and I don’t know what else. All I can tell you is just experiment until you get what you like. This layer was at
Blend mode: hard light; opacity 70%

It helps to have a good background so location is the key.  The rest of this info is the place and objects in Second Life for the base photograph.  I put the creator names as by store name (creator name)

here is where things get tricky.  The head and body is the physical head and body.  An applier applies the skin onto the head or body so it give the head and body texture to make it look real instead of an all white mesh statue.  These appliers are what can make your avatar look like a human, an elf or an alien depending on the skin.  You can do add-ons like elf ears, cat ears, horns, tails, etc as well.
Head (catwa) applier: Lara (EpiphanyJan) Tone 06 – 2 by Birth
Head Alice V4.10 by Catwa
Skin (maitreya) applier: Walnut cleavage v2 by 7 Deadly s{K}ins (Izara Allen – Zuta (izara.zuta))
Mesh Hands and Body – Lara V3.5 by Maitreya

So as you can see, a lot goes into making a Second Life picture.  As the model, I choose my physical look for the shoot so I have a variety of faces, bodies, hair, skins, and clothes that I “own” to choose from.  Some are freebies given away by creators and some are bought.  Some settings I create with landscaping or indoor items I own but most often I go to someone’s “land” aka sim and take a photo there.  Landscaping/Interior Decorating is also a big part of SL.

Honestly a fair number of pics from SL are boring.  People can be any age they choose and as gorgeous as they like so the vast majority of SL pics are basically selfies.  It is unlike other games as you can choose what you want to do so the learning curve takes effort.

In SL, you can become a creator, role play, have virtual sex with strangers (apparently an article in Playboy brought in a crowd of folks), take photos, breed cats or go shopping.  a friend of mine in Japan told me it is known among young people as a place to go to create your own sex anime comics. With voice, you can also chat or voice for free long distance across countries.  I talk with friends in England and Australia. I entered SL to take a master’s library science course with students across the United States. The professor gave lectures in SL and we did a joint project with a University in Wales.

You can landscape an island like the Lake District in England, Lovecroft’s Innsmouth, or a space station.  People make friends, take on lovers or complain bitterly about being lonely.  You don’t need money to get a ferrari  but it generally gets you a better ferrari.  In effect, it is a place where your experience depends on what you do, who you meet and where you go. It’s very open-ended. My thing is taking pics and hanging out with some friends there. Some of the people you meet are disabled in real life, cannot leave their homes but SL is a way to get out, make friends and do things.  I like taking pics in SL because I like the gamut of reality to fantasy ; being able to illustrate my poems is a plus.

Anyways, I hope you enjoyed this short intro into the making of a pic and life in SL.