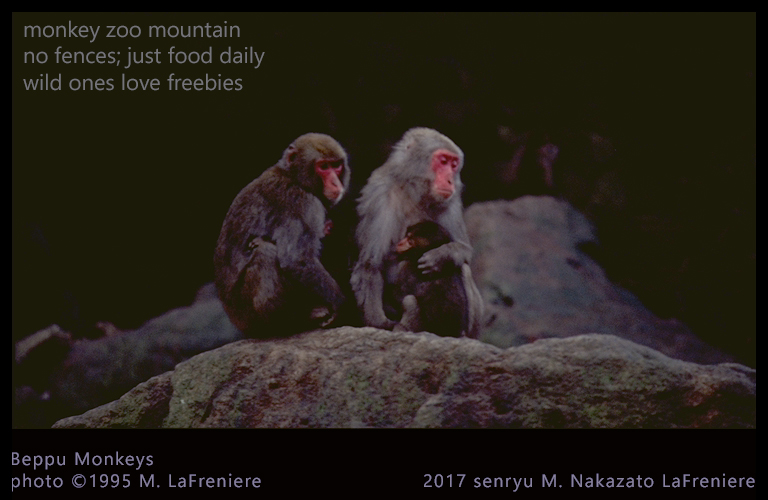 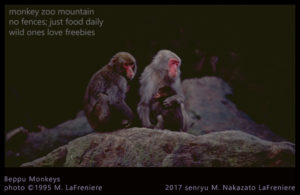 I used to call Mt. Takasaki,  Beppu Mountain because it was on the edge of the town of Beppu. Beppu is on the coast of Oita-ken with many natural hot springs spas that attracted tourists year round.

I wrote about the monkeys a little before when I wrote Senryu : Amble.

The farmers in Oita-ken had a problem with the wild monkeys eating their crops.  To solve the problem of the macaques without killing or imprisoning them, the government decided to bribe the monkeys.  On Takasaki, they created a national park and started putting out food daily.  The macaques had lived on the mountain for more than 400 years but with the daily bribes, the government hoped they would stop their forays into the cultivated rice paddies and farmlands. The government even built monkey bridges over the highway to help the monkeys get to the mountain safely.    The monkeys wander around at will on the mountain and can leave anytime. For the most part, the plan has worked although the occasional single monkey will go adventuring.

There are two wild tribes numbering around 1300 or so that live on Beppu Mountain (Mt. Takasaki) in Oita-ken.  They don’t get along so they come to the main daily feedings by the park personnel at different times.  There are smaller feedings hourly.  This first video is a smaller feeding I think because the ranger is throwing out the food by hand. I remember the park employee pushing out a wheelbarrow when I was there.

In this next video at around the 7minute mark , you can see the wheelbarrows they use for the main feedings.  You also can see that while there is a fence, there is no gate so the monkeys are not really separated from the tourists.  They can and do walk out in the same areas the tourists are.  So you can get some awesome closeups — just don’t sit or stand too close.

If they feel threatened, the macaques will bite. Make no mistake, despite the regular feedings, they are wild. There are signs in Japanese and English saying don’t stare the monkeys in the eyes, touch them or feed them.  The monkeys wander in among the tourists but will bite if you touch them. And if you are holding any food, sandwich bag, or can of cola loosely, they will steal it from you.

In the video, you will see a monkey around the 13min mark — looks like something is wrong with his paws.  I can hear the ranger saying “kawaii so” which means “poor thing” so I think something happened to that monkey.  Unfortunately, that is the extent of my Japanese so I don’t know what happened.

Now the two monkey tribes will have nothing to do with each other; think Montagues and Capulets.  The rangers call them Group B and Group C. And they come in the main feedings at different time.

Once upon a time there was a tough guy, Bentz, who rose to boss in Group B and naturally the girls in Group B wanted him but he had eyes only for … you got it .. a Group C girl. I could not find her name mentioned anywhere which is too bad. Can you imagine Bentz saying to his lady love, “Parting is such sweet sorrow that I shall say goodnight till it be morrow.” ?

So Bentz ran off to join Group C to be with his love in 1990 and it was back to the bottom of the heap for him. I remember the ranger, as he threw out food to the monkeys, told that story to Rie and she translated it for me.

The next bit I got from various websites as it happened after I left Japan. Slowly Bentz rose up the hierarchy in Group C and by 2000, was number 2.  When Group A went to war against Group B, Bentz led Group C in as allies and together they drove Group A off the mountain in 2002.  The battle increased tolerance between Group B and Group C.  Eventually Bentz became the boss of Group C in 2011.

In December 2013, Bentz disappeared never to be seen again.  He was 35 which in human years is over 100 years old.  Because he had disappeared earlier that year to be found in the middle of Oita, I looked to see if he had been found but couldn’t find any other reference to him.  I am handicapped, though, since I don’t read Japanese. I think, though, perhaps Bentz went away to die. A sad good-bye to Romeo.

Monkey of Mount Takasaki, made famous by Charlotte and the boss monkey Bentz
Xperience

From Amazon Books: some travel guides that might be helpful. I thought it was interesting that you can buy Lonely Planet chapters (Kyushu&Okinawa) on kindle instead of the whole book. The other one is from Tuttle Publishing which I thought looked intriguing. When I was living in Japan, I often bought books by Tuttle — a publisher in Japan, they produced books written by folks living in Japan, including Europeans and Americans.

Disclaimer: I have signed up as an Amazon affiliate so I may get a small payment if anyone buys anything by clicking the amazon links. The sheet said 4.5% if it’s a book. I think this next quote is required but I’ve noticed on some sites they have written their own personal text so I’m not sure. “We are a participant in the Amazon Services LLC Associates Program, an affiliate advertising program designed to provide a means for us to earn fees by linking to Amazon.com and affiliated sites.”