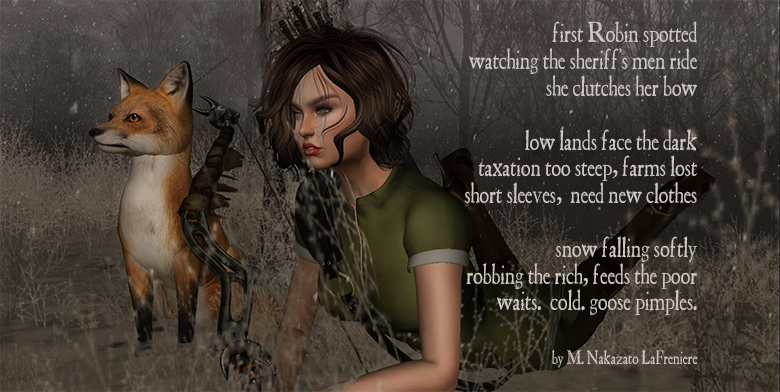 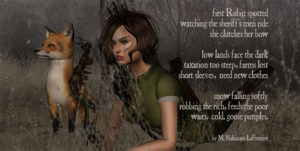 Chèvrefeuille challenged us this week to create a troiku using this poem as a base:

Each line of the original poem becomes the first line of a three-stanza troiku.  I took a couple liberties which I hope Chèvrefeuille won’t mind to make the first line 5-syllables on each of my stanzas.  In troiku, the second stanza starts with the second line which is 7-syllables so you are not required to be in the traditional format in that stanza.

In haiku, the bird robin is a kigo (seasonal word) representing the season spring.  So in the original poem, the robin (bird) is a harbinger of spring even though it is still winter.  I shifted the robin into Robin of Robin Hood fame and then made her female. In my troiku senryu tale, my Robin is really regretting wearing spring clothes as winter has started.  Plus you know, she should really be wearing white for camouflage. She thinks about this but other people need the money she robs more. Altruism can be tough. Maybe she can steal the sheriff’s white fur coat soon.