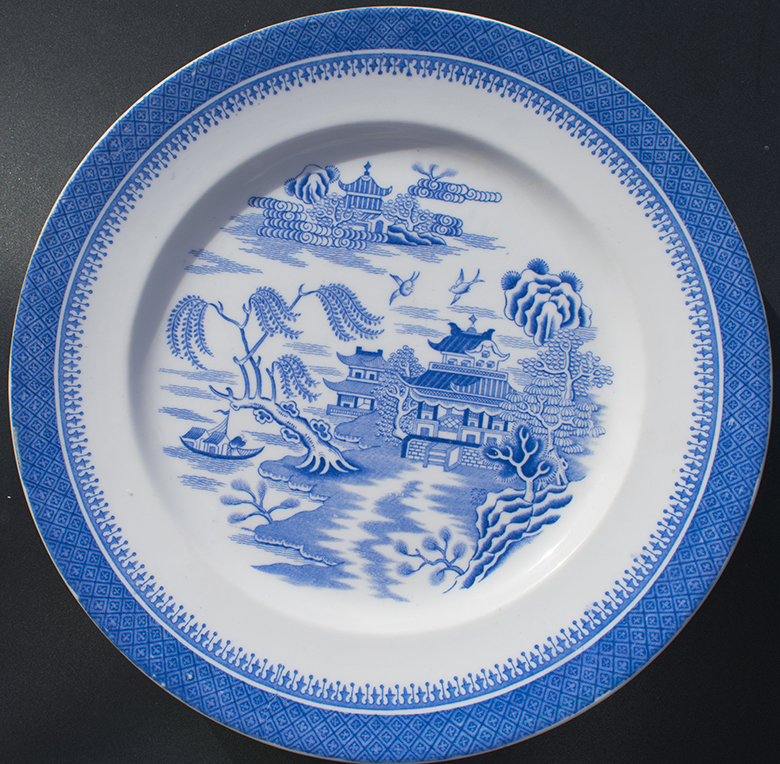 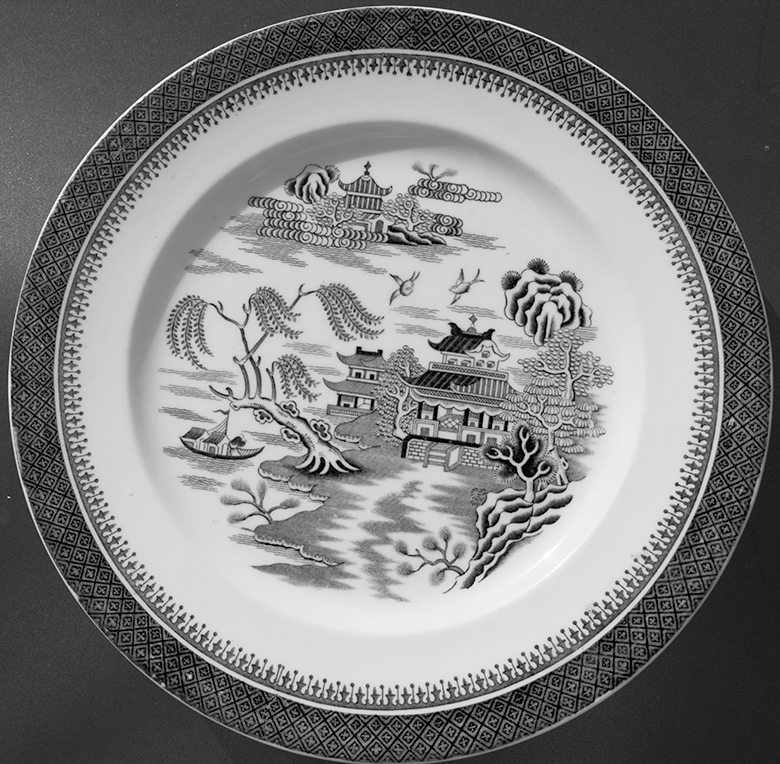 May 1880
a family supped gilt edged
snapped up – ebay prize

Cee’s challenge to do a black and white image of something found in our kitchen so I pulled out my 1880 Mandarin plate. I snagged it on ebay for $7 several years ago.  I wash and eat off this plate made 137 years ago while speculating about the first probably British family that ate off of this back-then brand-new gilt-edged plate. Times were very different back then.

Thinking about what might have made the news back then: 1880 was only 15 years after the United States Civil War ended.  February 1880, the first electric streetlight was installed in Wabash, Indiana.  May, writer George Elliot (aka Mary Anne Evans) age 60 married John Cross age 40.

In June, Ned Kelly was captured by the Australian police after a gun battle and hung later that year. France takes Tahiti. In August, the Cologne Cathedral was completed, only 632 years after construction began in 1248. Barnum & Bailey join up.

That autumn, the Apache chief and war leader Victorio was killed by Mexican soldiers. The Snow Winter of 1880 with its blizzards starting in October is still considered one of the worst winter’s in United States history and is the subject of Laura Ingall Wilder’s book recounting her family’s survival during The Long Winter.

Lillian Russell made her debut in New York City.  The First Boer War started. The first cash register was patented. The Capuchin catacombs of Palermo was officially closed. Pierre and Jacques Curie discovered piezoelectricity.  And that’s just the first year of this plate. 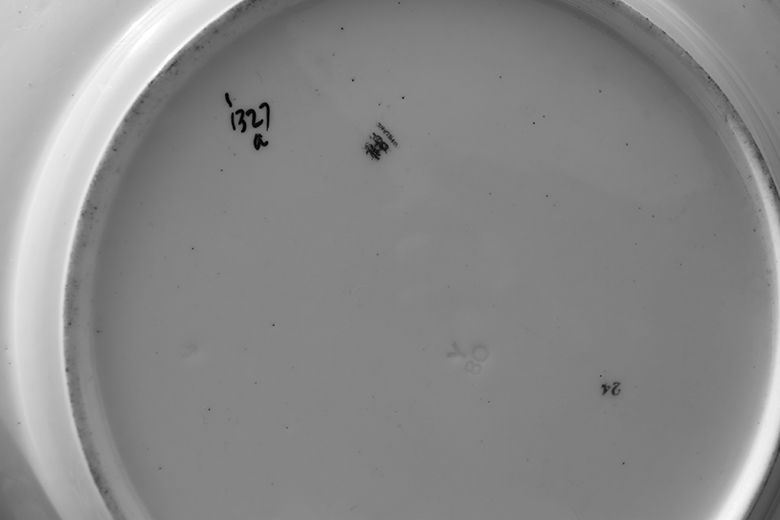 to better see the impression was doing a rubbing.  Nowadays, we can use Photoshop to darken the back sufficiently to see the markings.

You can see the makers by the little mark which shows this to be Copeland.  The names on the pottery also helps to date a piece.  Spode appeared from 1770-1833. The Spode name appeared inconsistently on the back but was sometimes imprinted, sometimes printed in blue or black ink while the pattern number was in red. Then 1833-1847, the logo changed to Copeland & Garrett often in conjunction with “late Spode” meaning formerly Spode. From 1847-1970, it was W.T. Copeland & Sons, Copeland or variations in conjunction with or without Spode. On this plate, the logo appeared as Copeland under a curlique design.  Pottery.org shows the various Copeland marks. In 1970, the Copeland company reverted to using the Spode name.

For the United States, some import laws effected how pottery was labeled. The McKinley Tariff Act of 1891 required imports to have the name of their country.  There was a caveat that items in a set did not have to have a mark.  Then in 1914, the law changed to require “made in”.  In 1921, the name of the country had to use the American spelling.

So what does this mean.  Let’s say a plate made in Japan was imported to the U.S. in 1880.  It does not have to have the country name on it.  So my Copeland plate only says Copeland and not England or United Kingdom.

If that same Japanese plate is imported in 1891, it will have “Nippon” under the mark which is the Japanese name of Japan.  That same plate imported in 1914 would have “Made in Nippon” imprinted. Then in 1921, the plate would read “Made in Japan”.   Japan is a special case because it was occupied in WWII.  So from 1945-1952, pottery would read “Made in Occupied Japan” and returned back to “Made in Japan” when the occupation ended.

The tricky part of this is that paper labels are allowed for “Made in….” which means that when the labels fall off, there is no way to know which country something came from as the back may be completely blank if nothing is imprinted or painted under the glaze.  This makes dating something like the blue willow difficult because the pattern is still being made today by several countries. So a blank-backed plate may have been made 200 years ago (before the McKinley Act) or last month when the “Made in China” label fell off. You never know.

Technological advances can give you a start date but not the end date as things can be touted for decades.  For example, Ironstone was patented in 1813 but became a generic term and is still used today.  Things like “detergent proof”, “oven safe”, “dishwasher safe”,  and “microwave safe” mark a plate as more modern obviously.

So I was lucky they stamped my plate “Y 80” so that the date was  a gimme.

This pattern is called Mandarin and is the precursor to what would become known as the Blue Willow pattern.  Here it is again in color.

Back then, some British potters made their pottery based on Chinese art in paler blues.  Dark blues was the norm because cobalt blue was the best and cheapest pigment that could withstand high-temperature kilns.  Part of the paler blue choice was that Chinese pottery that was shipped to England was stored below the bilge lines in ship while the more precious tea cargo was stored higher up.  So sometimes the salty seawater would get in and damage the handpainted porcelain, fading the dark blues to pale blues.  Not knowing the original color, the recipients assumed the pale blues were the intended color, among whom were pottery makers who were inspired by the Chinese vessels.

In the Mandarin pattern, you can see many of the elements that would become the iconic Blue Willow pattern:  the two lovebirds, the willow, the rich house, the temple in the background, the apple tree and the boat.  It is only missing the bridge with 3-4 persons which came later.   When the Mandarin plate was first sold, it was gilt-edged but over time the gilt has worn off.

Below is a 1926 Ridgway Blue Willow plate with all the elements.  I like the Mandarin pattern better, though.  Seems a little less crowded. 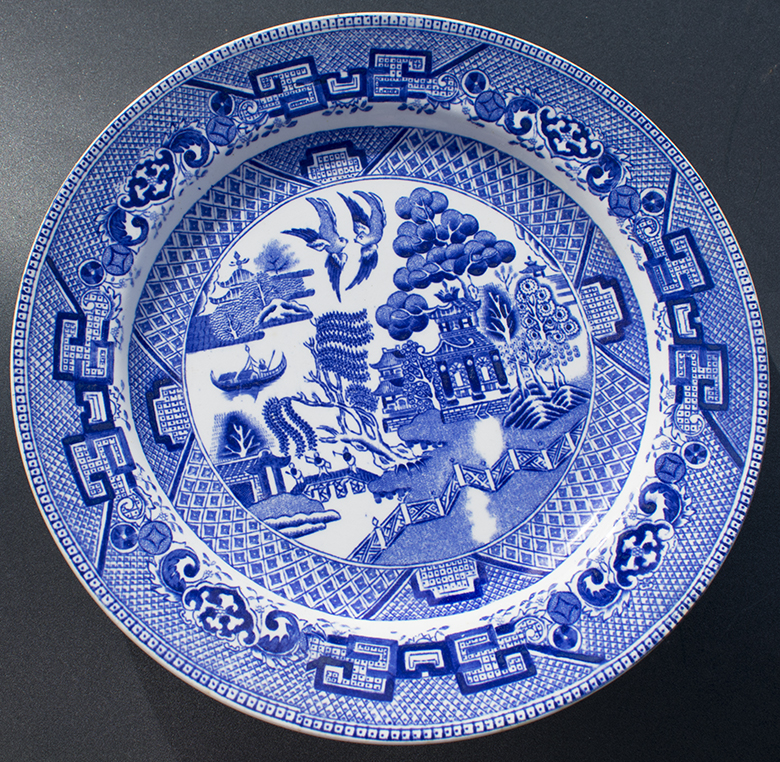 Funny thing about the Ridgway plate.  Because the logo has 1832, you will see people advertising it on ebay as made in 1832 and ignoring the little imprint like mine had an imprint of O 26 for October 1926.  In the picture below, I used Photoshop to burn in the area around O 26 to make it stand out more and a couple arrows to the pertinent areas. 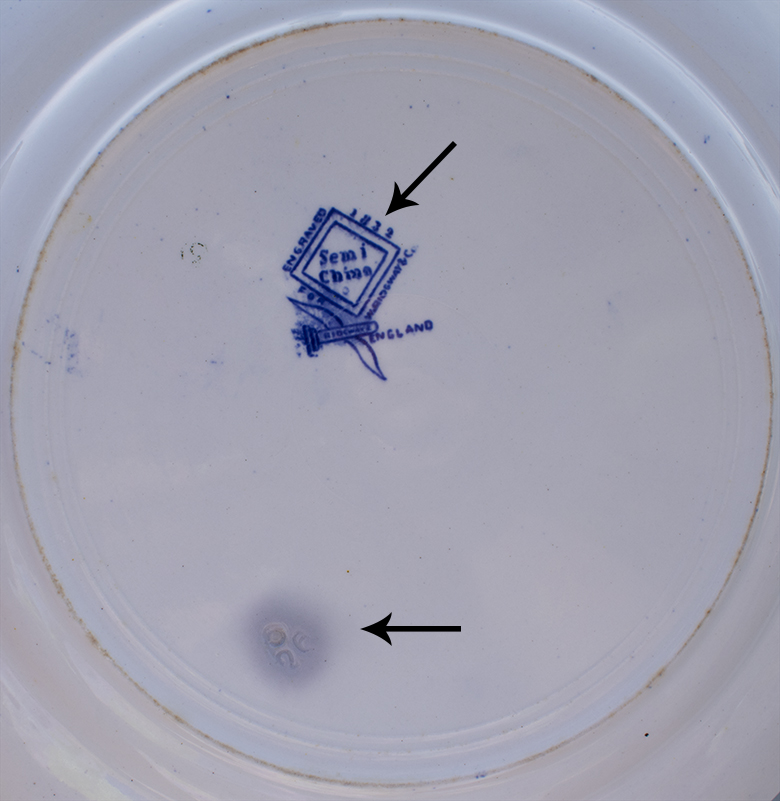 You have to be a little careful on ebay, of course.  My 1880 plate was touted as a Civil War plate.  Luckily they had a scan of the back so I could see it was a little later.  It was still a Victorian plate so I was pretty happy to win it.  Anyways, here ends the tale of my plate.

Spode shown by Pattern name
(Previously sold pieces but shows a nice variety: Mandarin is shown here as well as Bridge & New Bridge which included the bridge element that would be merged later into the Mandarin pattern to create the iconic Blue Willow pattern)
Lovers of Blue & White