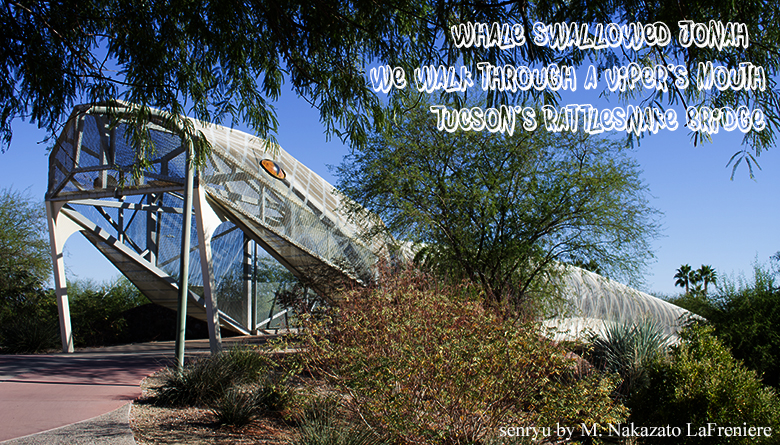 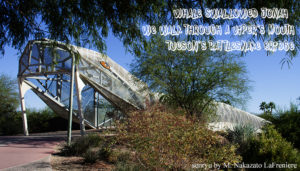 I took some more pics of the bridge if you’d like to see them at Arizona Mary Photos.

(This text is the same text I shared there just so you don’t end up reading the same thing twice, smiles)

Tucson, Arizona, USA. Built in 2002, Rattlesnake Bridge is a bike/pedestrian bridge that runs over Broadway just before it turns towards downtown Tucson.  Apparently there is a tail on the other side that rattles when you walk under it. It is a bridge that I wanted to visit in particular once I had seen it on a weird things in Tucson list.

I went to the park at about 2:30pm today.  It was totally empty. It was a nice cool breezy day, around 78 degrees F but no one was on the swings or walking around.  It made the park feel spooky. On Yelp, someone wrote that they saw a few people sleeping here  and the smell of alcohol and stink of someone using the bathroom outside.  There was no one here and no stink  although there was few bits of garbage blowing around and some broken glass underfoot if you went off the path.  I didn’t stay there long and didn’t cross the bridge.  Last month someone was killed here so I think people will be avoiding this park for awhile. Makes me sad that someone committed violence here because it could be a nice park.

Bicyclists may still be using the bridge to commute to work if they work downtown. Today is Sunday; I didn’t see any cyclists up near the bridge mouth although I did once I drove away.  Two cyclists were cycling south on Euclid,and then east on Broadway away from the bridge and downtown.  Since the park is about a mile from the University, I would imagine students live in the apartments nearby. The University has a large cycling population because parking really sucks near there.

Warning: if you come to Tucson and want to take a picture of the bridge, visit it in the middle of the day preferably with a group.  Last month October 12, 2017 at around 7:30 pm (sunset was 5:54pm), a man and his female friend were walking near the bridge.  They were held up by two men and although they gave the robbers their money and cellphones, the male victim was shot and died soon after.  The female victim was unharmed physically. 15 minutes later a few blocks away, the murderer shot his confederate,  (imo, to keep him from talking) but the confederate was rushed to the hospital and survived.  The shooter hid out on the Tohono O’odham Nation but the tribal police arrested him on unrelated tribal charges and then extradited him to Tucson. The Tohono reservation runs along the southwest side of Tucson.