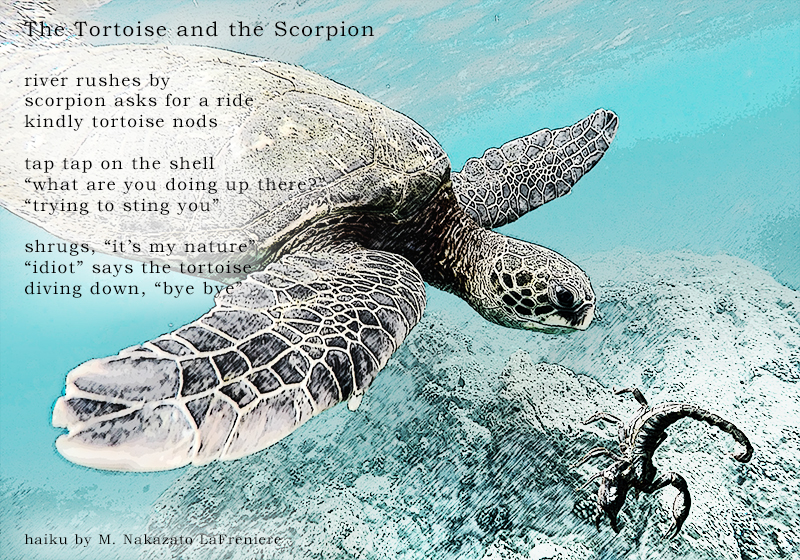 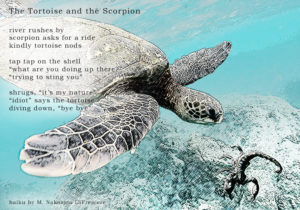 Just cuz you’re nice, doesn’t make you a fool: an old folktale
aka The Scorpion and The Tortoise (told in haiku)

tap tap on the shell
“what are you doing up there?”
“trying to sting you”

In some stories he convinces his close friend to carry him over; in some stories he sweet talks a creature swimming by into carrying him over who may or may not be acquainted with him.  Basically the morale of the story is a person or animal will revert back to their true nature eventually even if doing so is not in their best interests and will destroy themselves along with people/creatures around them and/or how much they love or care about their victim if the scorpion is great friends with the potential victim. So it’s either “Be careful of strangers no matter what they promise” or “Dump your friend quick once you know their truly colors”

Personally I think people and animals can change but it’s hard so you change for awhile and then revert and then change and revert.  Each time the changes last longer and the reversions are shorter in duration until they change for good.  However, not everyone or every animal can make a change.  While the change is being made, the person/animal changing has to believe the change will result in positive benefits.  If that belief/trust is lost, likely they will revert.  And yes, some of them are faking it and will revert.

Pinkie, my crazy cat, is becoming more domestic.  Lately she is actually letting me pet her.  She never used to let me do that and I am talking about seven years of never.  Sometimes in the middle of being petted, she remembers she doesn’t like to be touch and she will be bite.  I’ve noticed that I can tell when she is getting uncomfortable because her tail starts to twitch and I stop.

Pinkie never used to purr but in the last couple of months she has started purring.  I taught her to purr by laying down next to her and making purring notices.  Eventually she copied me.  She might have known before but I never heard it.  Now if I can get Pinkie and Midnight to get along or at least ignore each other, I would do a happy dance.

I decided to do this folk tale haiku for the Open Link Night at dVerse Poets Pub. I originally wrote the haiku folktale on August 12, 2017 (without the paragraphs on the variants and Pinkie) and included a random picture that I took.

Also for Experimental on the Daily Post Weekly Photo Challenge, I will do my own photo later this week on my photo blog (looking for some infrared ones I did) but I thought it would be okay to include this because I changed two “real life” photos in photoshop to become one picture for my story.   As there was no picture that really fit my folk tale, I created one on September 20, 2017 and changed out the pics in the original post. I used Photoshop to merge a tortoise and a scorpion picture along with using some filters to change the look of the image from reality to this.  I posted how I did it in a three-part post on my other blog, Restructuring life:

Image: I changed the photograph a bit in Photoshop but used 2 photographs as a base:

Some folk tales on Amazon:

Note: Amazon disclosure: “We are a participant in the Amazon Services LLC Associates Program, an affiliate advertising program designed to provide a means for us to earn fees by linking to Amazon.com and affiliated sites.”