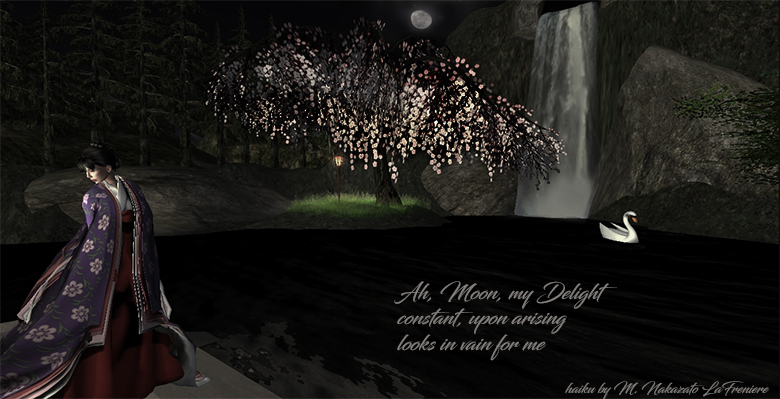 Ah, Moon, my Delight
constant, upon arising
looks in vain for me

This week in Heeding Haiku, Chèvrefeuille  has challenged us to “create a haibun or haiku inspired on one of the quatrains extracted from “The Rubaiyat””.  I chose the following quatrain from Edward FitzGerald’s The Rubaiyat Of Omar Khayyam, the Astronomer-Poet of Persia, (London, B. Quaritch, 1st ed., 1859).:

Ah, Moon of my Delight who know’st no wane,
The Moon of Heav’n is rising once again:
How oft hereafter rising shall she look
Through this same Garden after me – in vain!

Bob Forrest did a verse by verse explanation which I found helpful.  This bit is about the verse I chose:

Ah, Moon of my Delight who know’st no wane,
The Moon of Heav’n is rising once again:
How oft hereafter rising shall she look
Through this same Garden after me – in vain!

“Moon of my Delight” is the Poet’s Beloved, she being constant, unlike the Moon of Heaven, which waxes and wanes as the month goes by. The meaning of the last two lines is that there will come a time when the Moon of Heaven looks down upon the Poet’s Garden, but will no longer find him there, because he will be dead (see the next verse.) Incidentally, it is an easily missed fact that the rising Moon in this verse, at the end of the poem, pairs with the rising Sun in verse 1 at the beginning, the whole poem thus effectively following the course of Omar’s musings through a symbolic day, from Sunrise to Moonrise. Did FitzGerald intend this from the beginning, or did he only notice it later? It is a fact that FitzGerald only pointed out the Sunrise to Moonrise progression in a letter written to his publisher Bernard Quaritch in 1872, fully thirteen years after the appearance of the first edition. Talking of Omar, he wrote:

“He begins with Dawn pretty sober and contemplative: then as he thinks and drinks, grows savage, blasphemous, etc, and then again sobers down into melancholy at nightfall.” (III.339)

It was this late notice which led Martin (as note 1e, p.209), for example, to speculate that it was “probably hindsight”.

Verse by Verse Notes on The Rubaiyat (1859 edition)
Bob Forrest

Full text of the 75 quatrains published in FitzGerald’s first edition of the Rubaiyat of Omar Khayyam
OmarKhayyamRubaiyat.com

Downloadable pdf of the scan of The Rubaiyat
translated by Edward Allen-Heron, 1898
Internet Archive