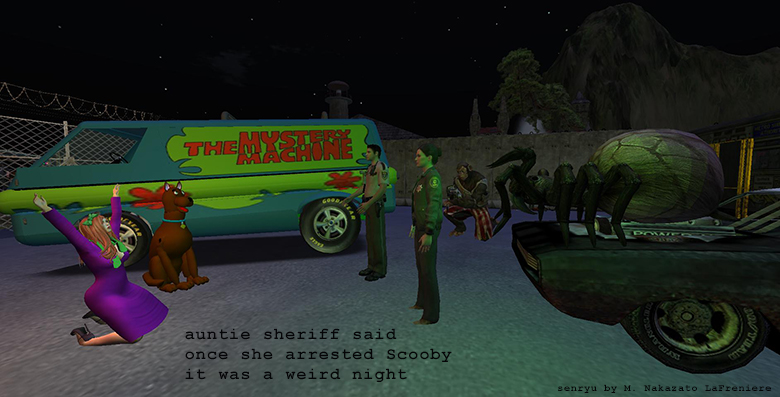 She doesn’t talk about that night much.  Just said good thing Henry was fast with a gun as they had a slight problem with a chimp.  She’d shake her head, look into her coffee, saying that was the night she really started hating spiders.  She’d remember “That night was black, no moon, even the stars seemed dim it was so dark when we came across the dog and the girl.  The two were peering into a car as if they were going to steal it so Henry and I said, “Down on the ground. Hands up!”  The dog sat and the girl kneeled. It was only a flashlight in the girl’s hand, not a weapon after all. She dropped it by the car so that was good.”

Auntie told me, “The girl yelled, ‘Seriously, officer, look behind you.”  I wasn’t going to but that dog was shaking with fear so I did.  It was  a big-ass spider.  I guess that dog was scared of spiders.  Quiet town like this, we never get to use our guns.  Good thing I stay in practice.  Henry is not the only one fast with his gun.  Took care of that spider. Yep, I did.  I hate spiders.”  They ended up letting Scooby go.

(in)Famous and possibly fictional
challenge: write about a relative’s encounter with a famous person
imaginary garden with real toads