my identity
a nod to my ancestors
still grounded in me

I took the photo in my twenties.  Three negatives: a photo of a rose on a white background; a photo of myself in the mirror; and a photo of a poem (which I erased her to put in today’s poem). The negatives have to be overexposed or be filled with bright highlights to do this as they darken with each sandwiched layer.

I sandwiched the three negatives and exposed them to photopaper.  The thumb being in the way was an accident but I liked it for some reason so I kept this one as well as a “more perfect” one.    Then I developed the photo in a b&w darkroom, the old fashioned way.

I love the immediacy of digital cameras — from the card into the computer with no delay.  However I miss the darkroom, the magic of a photo surfacing onto the paper while it floated in the developer.  Don’t miss the chemical smells though.

Oh you are curious about the original poem I wrote in my twenties? 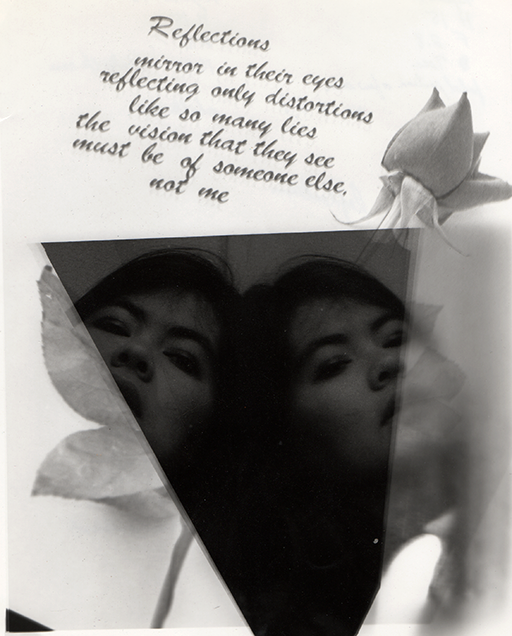 I think in some ways, the two poems do show the changing visions in one’s own identity as one ages.  In my twenties, I was overly concerned with how other people saw me.  I had no stories of ancestors to fall back on so “adopted” ancestors by becoming very interested in women’s history, and later pan-asian american history.  I still identified with my Okinawan, Norwegian, French and perhaps Blackfoot roots even though I didn’t know much about them so for a time became interested in different art, folk art and folk tales from their areas. That interest in history, arts and old stories has never faded.

Eventually though, everything you’ve learned, done and seen, people you’ve known, the relationships you’ve had, just becomes a part of you.  My ancestors feel like they are part of me even though I don’t know their stories. They are woven into my DNA. You don’t worry about who you are, how other people see you, what you are becoming; because you just are.  You are who you are, who you have been and who you are becoming;  at the same time all the time.

Identity stops being a question. Identity becomes the journey.