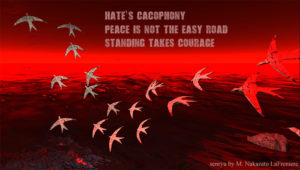 A young Indian woman, Gurmehar Kaur, stood for peace, protesting against Akhil Bharatiya Vidyarthia Parishad group’s bullying at Delhi University. The ABVP first objected against two Pakistani being invited to an event which resulted in the college calling off the event. When students organized a peaceful protest against these events, the ABVP and the police attacked them. Kaur participated in that protest and her views advocating peace between India and Pakistan became known.

Kaur became a national target: the ABVP, and then it spread outwards to even  ministers and celebrities denigrated and made fun of her.  Cyberbullying ensued. False videos of her was created and posted on the internet. She has been threatened with rape and death.

Her crime?  Wanting peace between India and Pakistan and speaking up in favor of it.  Her father in the Indian army had been killed by Pakistani but she posted a sign on social media: “Pakistan did not kill my dad, War killed him.”

Despite the national harassment and physical threats, she has not given up her views.  October 12th, Time Magazine named Gurmehar Kaur one of the “10 Next Generation Leaders” of 2017 for her courage.

“Why should I keep quiet?” Kaur says. “And if I have something positive to say, why shouldn’t I say it?”
(quoted from Free-Speech Warrior , Time Magazine)