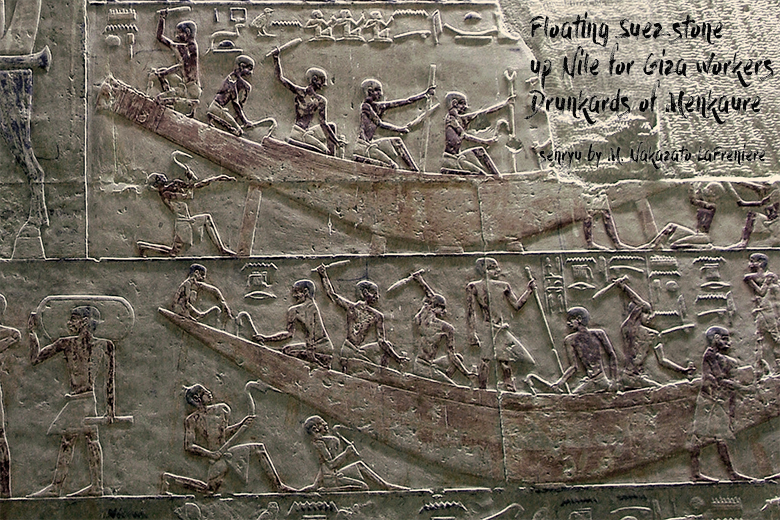 Yay! the pingback on Daily Prompts is working for me again!  I expect you know how happy I am.

They found the oldest known papyrus including one by Merer, an overseer back in the time of making of the Giza pyramid revealing new information of how tons of stone arrived there.   And guess what?  It wasn’t aliens.  Darn it! Dad wouldn’t be happy about that but I think it’s pretty cool to find the diary of a foreman managing his working class crew back in the day.

Merer journaled about his trips to Turah limestone quarry to for the stone to be ferried to the Giza pyramids by his crew. Built with planks and rope, the boats over the years brought 170,000 tons of limestone to Giza. These papyri fragments are on public display at the Egyptian Museum in Cairo.

Archaelogist Mark Lehner excavating there found that excavating for 2-3 months while teaching the rest of the year wasn’t working for him so he quit to excavate fulltime in 1999 with funding from some philanthropists. His international team of 30 archaelogists found two towns, one of which Lehner speculated was the workers’ town.  However instead of finding houses, he found barracks flanked by bakeries and bones.  They found a lot of cattle bones.  The cattle was likely brought in ready to be cooked as there were no ranches nearby.  Kind of like nowadays as we truck meat into urban centers although the cattle were probably mooing as without refrigeration, they were brought in live.

They also found 600 skeletons.  A nearby graveyard for workmen wasn’t disturbed by graverobbers who were more interested in the gold of the nobility. Many of the workers were buried with a jar of beer. Forensics showed these were Egyptian workmen, age 30-35. Some were injured on the job. One man had a stone fall on his leg but he lived for 14 years after they cut his leg in surgery.  So it looks like they had emergency treatments for their workers.  Given the consistency in age, Lehner speculated working on the pyramid was like the draft.  You have to go and do it for a few years and then you went back home to your village.

One project at the Great Pyramid is using 3d lasers to map the inside of the pyramid without disturbing the build — a good thing because in the past dynamite and destructive methods were used to get at the goods.  There is evidence there may be more hidden rooms.

So I expect we’ll be finding out more about ancient Egyptian society.

GIZA CLUE: Archaeologists uncover proof of how Ancient Egyptians built the Great Pyramid in 2600BC: Discovery of an ancient papyrus scroll, a ceremonial boat and system of waterworks show how they transported 170,000 tons of limestone by George Sandeman, The Sun, September 24, 2017

The real boats of King Khufu: The world’s oldest port has been discovered near the Red Sea town of Zaafarana and, as Nevine El-Aref shows, it reveals that contrary to common belief the ancient Egyptians were accomplished sailors, Al-Ahram Weekly, April 16, 2003

Egypt’s Great Pyramid: The New Evidence, Channel 4, documentary 47:31 minutes (Note: I wasn’t able to watch it as it wouldn’t play on my machine)

Papyrus Reveals From Where The Rocks Used To Build The Great Pyramid Came From by David Bressan, Forbes, September 28, 2017

The Private Lives of the Pyramid-builders by Dr Joyce Tyldesley, BBC, February 17, 2011