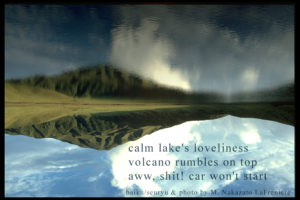 Ages ago, Rie and I drove up to Mt. Aso in a little white car. I had just learned to drive a manual transmission and was all proud of myself on our little roadtrip.

Wiki says Mt. Aso is Japan’s largest active volcano which I did not know at the time. I went there pre-wiki or I would have known:

The present Aso caldera formed as a result of four huge caldera eruptions occurring over a range of 90,000–300,000 years ago. The caldera, one of the largest in the world, contains the city of Aso as well as Aso Takamori-cho and South Aso-mura. … Ejecta from the huge caldera eruption 90,800 years ago… it is presumed that the pyroclastic flow plateau covered half of Kyushu.”

At the time, I taught English in Oita and it was a nearby popular tourist destination. Not unnaturally, I assumed Aso was dead or at the least, not active. We stopped by a beautiful lake in the caldera. Gorgeous day, peaceful. Drove up to the summit … and no cars. The parking lot was empty. A huge sign basically said Mt. Aso is active today so go home. The sign further warned if Aso spits rocks at you, get under one of the shelters. Yes, I am paraphrasing — you expect me to remember it verbatim? It was decades ago. Get real.

Rie and I looked around for one of the shelters just in case. Shelters? They look like bus stop shelters. Sure, they were made of concrete but they were tiny and open. I wish now I had take pictures of one but our priority at the time was getting out of there.

The car wouldn’t start. Seriously. And no one was up there to give us a tow and this predates cellphones. Do you remember what it was like before cellphones and you were stuck in the middle of nowhere? Do you remember the panic? It was not a fun moment.

Then I remembered from high school driver’s ed (a textbook course, my school did not have a car to practice in), that if you get a car rolling, you can pop the clutch. Excited to be out of there, Rie and I pushed the car and jumped in as it started rolling down the hill.

“Uh oh,” I said to Rie. “What?” Rie asked. “I remember reading ‘pop the clutch’ but I don’t know what it means. I don’t know what to do next!” “Stop the car!” Rie demanded. “I can’t!” I answered tersely. Rie immediately started fumbling for the door handle. I yelled, “What are you doing?” “I’m jumping out,” she said. We were picking up speed. “because you can’t stop the car!”

“What? I can stop the car anytime. Well, not here. The road is too narrow. I can’t stop here.” “Oh.” “We still have the problem of I can’t start the car.” I said as we rolled to a stop towards the bottom. What the hell, I turned the key.

But you know, Jizo watches over children, women and travelers. The car started. We immediately set off for the tourist shop/restaurant. All the cars that were not at the summit — guess where they were? Yep, here. We relaxed, ate. Then the car wouldn’t start … again. However, a nice guy gave it a try and it started immediately (which was irritating and a total relief). We drove back to my Oita apartment with no more mishaps.

And by the way, I now know what ‘pop the clutch’ means.

Note:  the poem and my travel story fit two challenges so I entered it in both RonovanWrite’s Weekly Haiku Challenge and the dVerse’s Haibun Monday.  The story runs about 615 words.

Haibun is new to me. Haibun Monday wants a story but says “Try to limit your prose to not more than 150 words.”  I wasn’t sure what Haibun was exactly so looked it up on Wiki: “Haibun is a combination of prose and haiku, often autobiographical or written in the form of a travel journal.”  and also this: “Generally, a haibun consists of one or more paragraphs of prose written in a concise, imagistic haikai style, and one or more haiku.”

I think this is a haibun but the prose is short (for me) but not concise by most standards.  I love the concept of haibun.  Makes me yearn to go traveling, recording impressions in a combination of prose and haiku/senryu.  I need to work on the concise part though.

Note: While this senryu/haiku is a new one written today, I originally wrote this story for another senryu I wrote: Mt. Aso. I’ve noticed people don’t read old posts for the most part so thought it was okay to bring up the story again.

From Amazon Books: some travel guides that might be helpful. I thought it was interesting that you can buy Lonely Planet chapters (Kyushu&Okinawa) on kindle instead of the whole book. The other one is from Tuttle Publishing which I thought looked intriguing. When I was living in Japan, I often bought books by Tuttle — a publisher in Japan, they produced books written by folks living in Japan, including Europeans and Americans.

Disclaimer: I have signed up as an Amazon affiliate so I may get a small payment if anyone buys anything by clicking the Walden link. The sheet said 4.5% if it’s a book. They haven’t accepted me yet. I’ll let you know if I get accepted. It would be nice if it paid for the website at least. I think this next quote is required but I’ve noticed on some sites they have written their own personal text so I’m not sure. “We are a participant in the Amazon Services LLC Associates Program, an affiliate advertising program designed to provide a means for us to earn fees by linking to Amazon.com and affiliated sites.”