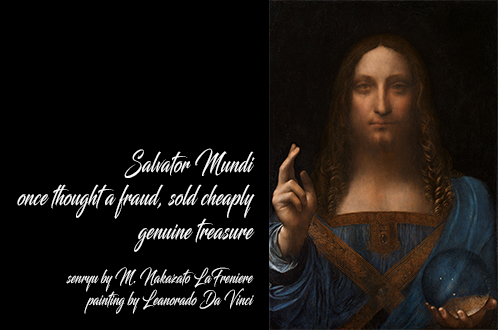 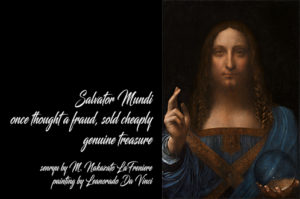 How much is it worth now? It’s provenance traced, it is heading for auction on November 15th and experts expect it will sell for $100 million American.

The road to recovery was a rocky one. Da Vinci painted it for King Louis XII of France in the 1500s.  150 years later, King Charles owned it before Duke of Buckingham’s illegitimate son sold it at auction in 1763.

Vanishing, the painting resurfaced in 1900 to be purchased by Francis Cook.  His descendants sold it cheaply at auction in 1958.  The original painting was overpainted so it was assumed to be a copy of Da Vinci’s work at the time. It disappeared again until 2005 at another auction. 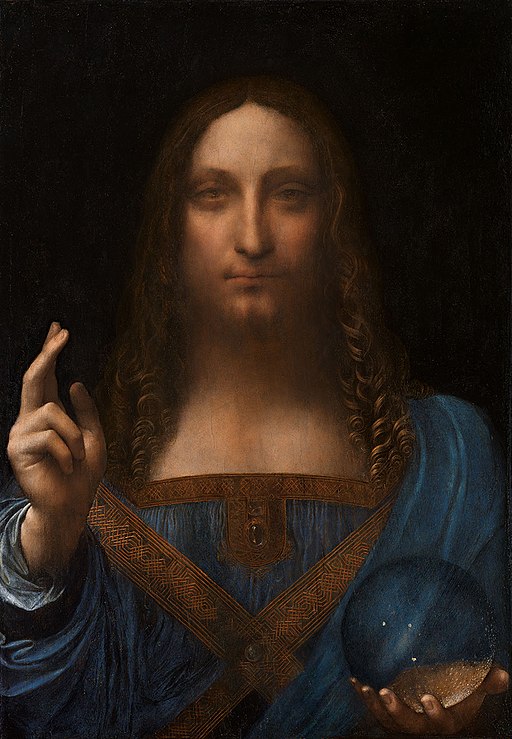 Six years of careful restoration, removing the covering paint and greyed resin, uncovered the original beneath Restored and authenticated, Salvator Mundi is now touring the globe before heading to auction again.

The current owner Russian billionaire Dmitry Rybolovlev collects art but is no stranger to controversy.  Arrested and acquitted of murder, massive pollution of Kama River by his company, and the Football Leaks Scandal (soccer), his life reads like a soap opera. Accused of buying three stolen Picassos as well as as perhaps a victim of art fraud himself by Yves Bouvier, his art collection has not escaped the taint of scandal.

Between the mystery of the Da Vinci’s painting’s unknown history and the life of the current owner, Salvator Mundi‘s tale is as rich and dark as it’s pigments.

Leonardo Da Vinci’s Last Jesus Portrait Is Up for Grabs If You Have $100 Million Lying Around by Raisa Bruner, Time, Oct 10, 2017

The incredible story of how the last known work of Leonardo da Vinci was almost lost forever, by Preeti Varathan, Quartz, October 11, 2017