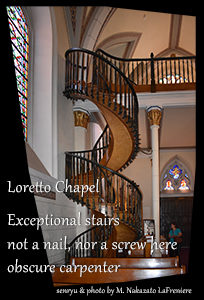 Exceptional stairs
not a nail, nor a screw here
obscure carpenter

Back in 1878, the Loretto Chapel was completed in Santa Fe despite the passing of the architect, Antoine Mouly.  Problem was there was no way to reach the loft where the choir was supposed to sing.

The nuns turned down several proposals to solve the problem.  While many places used a ladder, they did not want to do so in their habits.  The chapel was small so a staircase was deemed unpractical, filling up the space.

The legend goes after the nuns prayed for nine days, a mysterious carpenter showed up and said he could build a beautiful staircase to fit.  He built a lovely helix staircase without using nails, screws or glue.  It is very steep so a railing was added several years later.

While the story goes, the carpenter disappeared when he was done, historian Mary J. Straw Cook digging through records for seven years found that a carpenter, Rochas, from the mysterious French society of highly skilled Campagnons, did the work.  These craftsmen and artisans date back to the Middle Ages and still carry on their traditions in 49 countries, across five continents today.

Rochas used a square, a saw, a few other tools and warm water. He did the work alone — and think about this, no electricity so everything was done by hand. Rochas came to Santa Fe, bringing spruce wood from France, specifically to create the staircase.  The Campagnons travel throughout France and are required by their society to change work locations every six months to a year. Rochas died of a shot to his chest and never returned to France.

It was not until the 1990s with modern understanding of physics that they could finally explain scientifically how the staircase stands.  No matter the explanation, it is an amazing staircase.