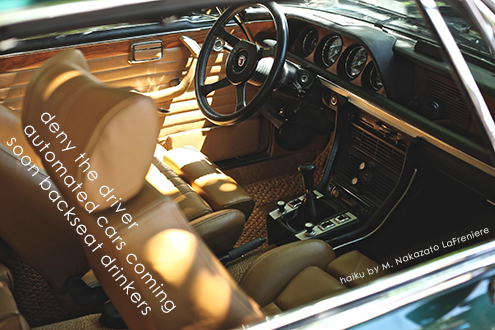 Apparently fully automated cars are around the corner.  Countries are already discussing legislation determining which is responsible in an accident: the car or the nondriving human.  In Australia, the National Traffic Commission has recommended that drunk, um, passengers not be held responsible and be exempt from drunk-driving laws because they won’t be driving — the car will be.

In the USA, the House passed a bill to paving the way for manufacturers to sell 25,000 self-driving cars in the first year, and moving up to 100,000 by year three.  At 10 am today, the Senate will be discussing a similar bill.  The Teamsters have managed to get commercial trucks taken off the table.  21 states have already passed legislation on automated cars. Several states, including my own Arizona, have had executive orders signed by governors.

These new federal bills also address cybersecurity.  With computers driving the cars, not assisting a human driver but actually driving, if those computers get hacked . . . Does anyone remember the Bruce Willis movie Live Free or Die Hard

in 2007 when a hacker terrorist takes control of the transportation grid?

I love my laptop and it does a great job but honestly, it does crash every once in a while.  While I do believe manufacturers will build in safety backups, I still have to wonder.  Computers are not infallible. I get that people crash their cars and everyone is touting this as much safer.

But seriously, hackers try to hack blog sites even ones with almost no visitors.  You are telling me they won’t try to hack the cars?  And all it takes is one crazy person to create an avalanche of damage.  I get that pile-ups can happen anyways even if cars are driven by individual people but I still prefer individuals having to be responsible.

If the car becomes the designated driver, are we in a Knight Rider episode?  Will people drink more if they know their car will pick them up and take them home? Although telling a car to go park itself after dropping us off at the shopping center does sound appealing.  And I absolutely adore Herbie.  I want a car just like him.

The future is here already and I don’t know whether to be excited or scared.

What do you think?

Photo by Sean DuBois on Unsplash

From Amazon: the movies and tv shows mentioned in my essay

Yay! I got my second “buy” as an Amazon affilate, again about $3. They bought the Firefly graphic novel, Serenity: No Power in the ‘Verse (Serenity: Firefly Class 03-K64)

and another item.  Must have been from my Leaf post. I’m happy.  I’ll usually get a percentage if someone buys something by clicking a link — for books it’s 4.5%. Amazon required disclosure notice: “We are a participant in the Amazon Services LLC Associates Program, an affiliate advertising program designed to provide a means for us to earn fees by linking to Amazon.com and affiliated sites.”